Steampunk can be many things, but a recurring element has always been an air of acrimoniousness. Any genre novel, movie, game or role-playing worth its pith helmet should involve copious tossing of churlish and disparaging insults. It fosters a good-natured, eccentric competitiveness. While Noxford wonâ€™t viscerally steep you in a world of high Victoriana, it certainly nails its acerbic nature - if you supply your own insults.

The design is deliciously simple and astoundingly compact. Each player has an identical deck of ten syndicate cards in four varying strengths. Fifteen neutral cards comprise the rest of this economical title, consisting of a few police barracks and twelve city districts. The goal is to control districts with your gang members while avoiding the Bobbies.

The city begins as two neutral cards laid out in an L shape. The rest form a draw deck, with three set out in a drafting display. Each player places their leader in front them, shuffles their other nine cards and draws three. On a turn, you play one card from either your hand (including your boss) or the neutral display (or instead the top card from the deck). Thatâ€™s it. Now, true to Steampunkâ€™s avant-garde form, there is a curious manner to placing cards. When playing one it must touch at least two others and two of its edges must align with two other edges. Most of the time itâ€™s obvious, thanks to a few rule book examples. Other times it leads to questions. Iâ€™m pretty sure we mostly got it right.

In any event, syndicate cards may also be placed on top of other syndicate cards of lower value. And some cards have gears on them which, after placing, allow you to move another card already in the city to a different location. Barracks negate any adjacent gang members in final scoring. As soon as one player deploys her entire crew of hooligans, the game ends. Gangs control districts by having the most number of members adjacent to it, with a leader counting as two. Capturing a district awards various points based on its number and types of symbols. 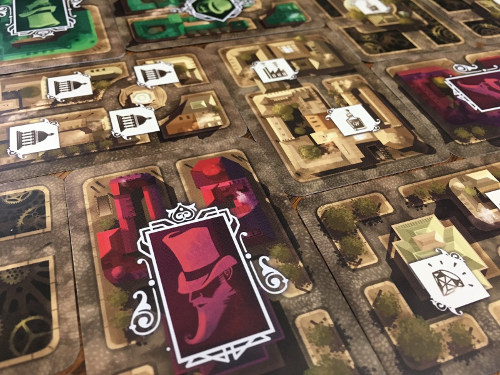 Noxford has many hallmarks of filler. Itâ€™s compact, portable, uses little table space, plays briskly and in less than twenty minutes. And really, thatâ€™s what it is. A filler- but a particularly tense, tactical and nasty one.

This little design is all about timing. The city of cogs constantly turns as players move cards about via gears or cover up henchmen with more powerful thugs. Deciding when to change the boardâ€™s state or react to anotherâ€™s shenanigans is critical. Dabble too soon and your influence will likely be undone. Wait too long and evolving affairs might prove your original plan moot. Itâ€™s so dramatically taught that youâ€™ll be shaking in your spats between the jockeying for position and tit for tat card swapping.

Youâ€™re never sure exactly when cards will be available and there are limited opportunities to use gears. But the two decks are so small, you wait anxiously for them to appear at any moment. Then subsequently fret over whether or not now is the right time to strike with them. It generates the same feeling in superseding opponentsâ€™ syndicate cards with your own higher ones. Do you wait out the power move to prevent them stomping you down again or up the brinksmanship to force their hand? The gameâ€™s economy, tension and tactical quality are tightly wound like a coiled spring.

This brings me back to Steampunkâ€™s wryly acerbic nature. This one feels decidedly like a duel and thankfully no weapons are present. Well, I can only speak for my gaming situations. This is a fast-moving, hard-hitting game of maneuver and counter-maneuver, where a well-time placement can unhinge things given the titleâ€™s short play length. So while itâ€™s very much about positioning your own resources around the most advantageous districts, itâ€™s also about sabotaging your foes in the name of fair-natured competition and old-fashioned skullduggery. And thanks to the endgame condition, the last player usually has a massive advantage, especially if she has conserved a gear card for that final move. Each increasing player count dials back the suspense ever so slightly, as the game becomes a little more chaotic and unpredictable. With two, however, the angst increases a hundredfold.

By design, fillers are generally casual, laid-back experiences. Theyâ€™re meant to kill some time while shooting the breeze, thus are rarely mentally taxing. Noxford laughs at that notion. Just as its inspired Steampunk setting both embraces and irreverently upends Victorianism, this biting title adopts the trademarks of the filler category and wrenches it with an ever-changing white-knuckle Chess match of a card game that will leave you scheming and, likely, steaming.