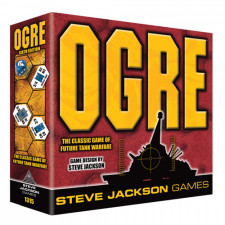 In one form or another, Ogre has been with me throughout my life as a game player. Sometime in the early 1980s, probably 1982 or 1983, I picked up a microgame version of Steve Jackson's 1977 masterpiece at a toy store. Being seven or eight years old, the idea of a giant robot tank alone was enough to talk me out of my $2.95. Even at that early age- and playing the game almost exclusively solo since my parents and friends weren't interested- the hopeless, dystopian man-versus- machine theme was captivating in a very rare, very pure way that few of today's games that claim to be "thematic" by virtue of reams of card text and illustrations could ever hope to capture. It was blunt. The humans didn't have much of a chance against a towering death-machine that kills with impunity and without mercy, ever lumbering toward that command post across a barren battlefield scarred by low-yield nuclear weapons.

But over time and with some experience, a human player could sort out how to win. With a little luck and good placement, you could use the hovercraft-like G.E.V.s as skirmishers, harrying the Ogre and trying to disable its weapon systems or destroy its treads. Infantry were expendable, with the Ogre's AP cannons chewing them up without effort. Bringing your heavy tanks and missile tanks into range was a suicide mission, sure, but they could do some serious damage. And if you deployed a Howitzer, the AI controlling the Ogre (well, either yourself or your opponent) might give pause to moving within range of its firepower.

If you haven't figured it out yet, I love Ogre and I consider it to be one of the best games ever made. It is a stone masterpiece of game design and it is one of the seminal, foundational hobby games upon which virtually everything you are playing today has been built. It remains the best light or introductory wargame ever made, and as far as games that express a theme with very little material, it is still one of the finest examples of organic narrative. It's a simple game, and some today may be surprised at how rudimentary it is. You might even call it "formative" given that it wasn't until Steve Jackson followed the original design up with the G.E.V. supplement that it reached its full potential with a broader range of units, terrain rules and scenarios. But like the Ogre itself, it is monolithic and unstoppable.

This is not the edition under review here. But just keep this image in your mind over the next two paragraphs.

Back in 2013, Mr. Jackson crowdfunded a special 6th edition of Ogre and you better bet I was on board for that. It proposed to be the complete Ogre package, featuring virtually everything ever made for it and then some. This was to be the first Ogre release since the somewhat ill-considered miniatures version of the game, featuring these lovely little cardboard models and big, mounted board that were a far cry from the tiny little paper maps that I once enlarged and mounted on foamcore. Fan material, supplements, all of the official expansions...it was epic.

But it was also unwieldy, excessive and gigantic. The box was enormous, and in it were hundreds of counters, terrain overlays, variant Ogres, highly specialized units, and enough units for both sides to play multiple concurrent games. You'd think that an Ogre fan would be delighted. I wasn't. I was disappointed that the "Designer's Edition" completely lost sight of the compact, contained nature of the game and turned it into a sprawling mess. It felt like a burden to own. I found myself wishing that there was something of a "compact" Designer's Edition. 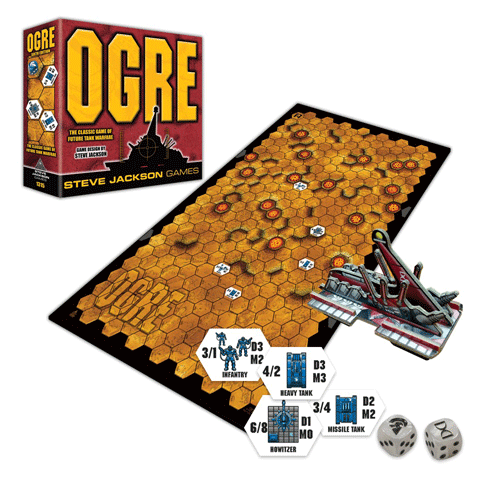 Now this is more reasonable. And this is the edition we're talking about here.

And now, here is exactly that- for the most part. Steve Jackson has paused the Munchkin printing operation he runs to produce an edition of Ogre that returns it to its core game without adornment. The new edition is just Ogre, as it was in the little $2.95 edition that is actually still in print. But with this package under review, you get the component quality of the big honkin' Designer's Edition. I couldn't be happier as a lifelong fan of this game- I now have an edition I can break out with my seven year old son that doesn't require me to sort through thousands of components or constantly battle to keep a tiny paper map flat.

Actually, my Ogre bliss isn't complete, if I'm being honest. I'm still giving this edition full marks because it is 100% Ogre and in a modern, approachable and fun edition. But I can't help but feel the lack of G.E.V. in particular, because that was one of the GREAT, transformative expansions and I view it almost in the same esteem as a standalone game as its parent. I'm sure the plan is to release G.E.V. in this kind of package and I will be first in line for it. But I found myself considering a journey into the basement archives to dig up the massive Designer's Edition box to go ahead and extricate the GEV material to put in this version's box. 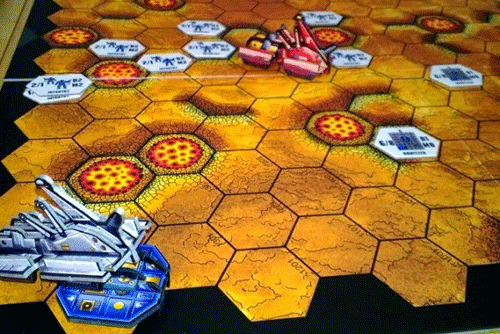 Rest assured, however, that if this is your first Ogre experience, this edition is the definitive version of the classic game except for the fact that it is not the vintage microgame with the incredible Winchell Chung artwork and the cut-'em-out-yourself counters - which was part of the experience, you spoiled young people. But I think those are acceptable losses in exchange for a mighty, modern Ogre game that I am looking forward to playing for years to come.