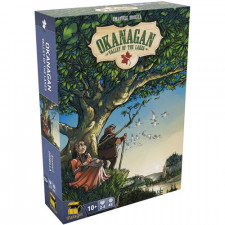 Okanagan: Valley of the Lakes Review

True to the new gamer stereotype, I fell hard for Carcassonne when I first played it. I rapidly racked up dozens of plays and I sought out that tile-placement high in a myriad of other games, but none ever came close. Okanagan: Valley of the Lakes has thrown its hat in the ring to dethrone Carcassonne, but falls short of taking the title.

Proudly flaunting its tile-placement roots, Okanagan follows the familiar tile-and-token turn structure. Over the course of a dozen (or fewer) rounds, you shape the Canadian wilderness by sliding terrain tiles together to create territories of lakes, fields, forests, and mountains. As the landscape comes together, you vie for influence over the territory by placing buildings. You must place a building on the tile you laid each turn, but the position depends on the building type. If you want to be a part of each territory, slap down a 1-value silo right in the center. If youâ€™d like a little more oomph, place a 2-value warehouse on the border between two territories. And if youâ€™re all in, place a 3-value farm in one territory. As the board expands, so do your options, making it easy to get lost in quiet Canadian contemplation. This tile-placement min-maxing will pull in certain types of players more than others. 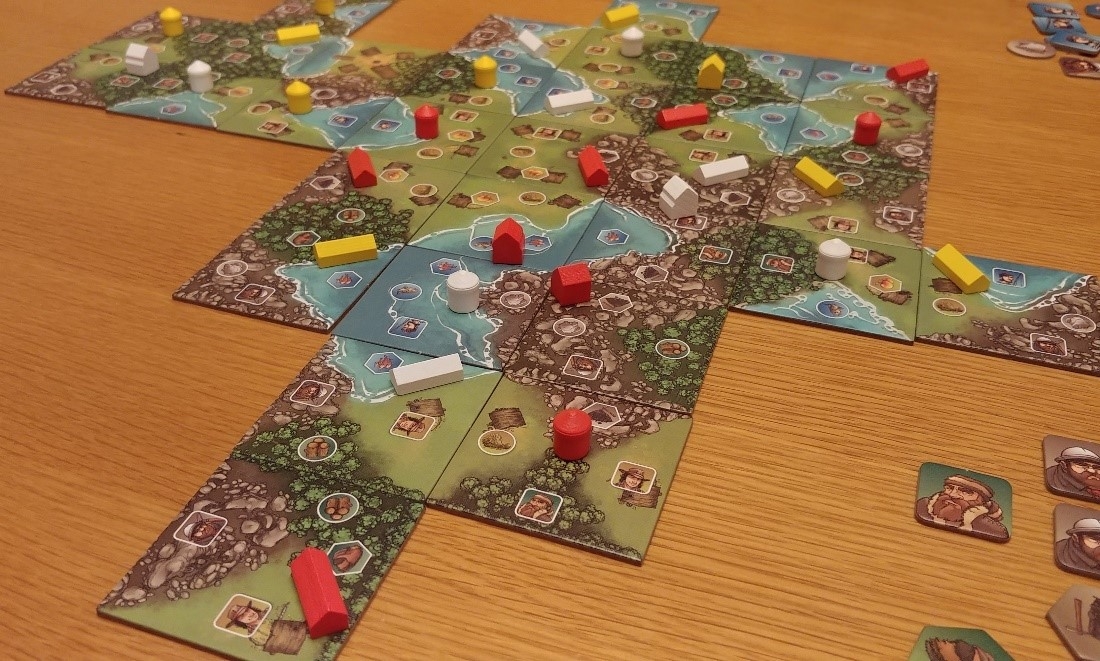 As beautiful as the Canadian lakes that inspired the game.

When a territory is completed, influence is calculated by totaling up each playerâ€™s buildings in the enclosed lake, field, forest, or mountain. Rewards depicted on the territory are divvied out according to the influence values, starting with the player with the most. However, before you get put your sticky fingers all over the rewards, the player with the least influence gets to take an action. Your choice of actions is available from the three stacks of territory tiles. Each tile has an action on the back that lets you do things like exchanging rewards (either for different shapes or colors), gaining a nugget card (which earn you endgame points for having the most, second most, etc.), or selecting your reward before the player with the most influence. The most interesting aspect of this influence battle occurs when players are tied. If you complete the territory, you can choose who among the tied players goes first. You may choose yourself if you want to ensure you can snatch a certain reward. Or, you may make yourself second if thereâ€™s an enticing action available. After the action is taken, players choose their rewards, according to the total value of their buildings in the territory, in decreasing order of influence. 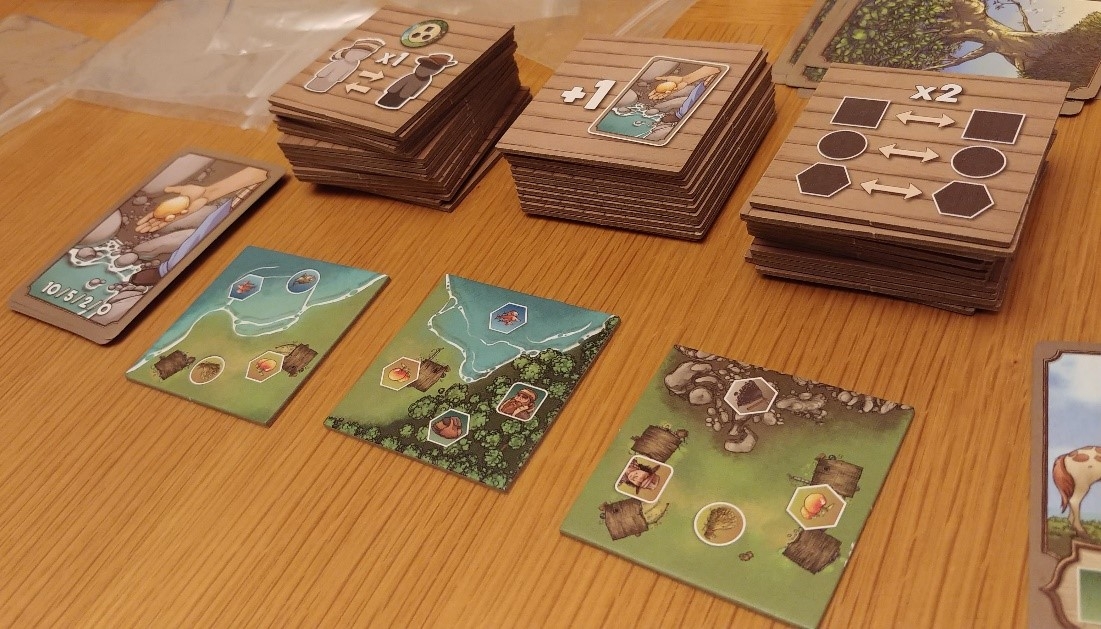 Business on the front, party on the back

The scrabbling for rewards is driven by your three objective cards doled out during setup. These cards tell you which sets of rewards will earn you points. There are four different colors and three different shapes within each, making it difficult to sometimes get the right rewards that you need. Since scoring for sets can be double (or even triple) counted, players who get overlapping objectives usually fare better than those without. Though the gameâ€™s halfway point has everyone draw two new objective cards and discard two of their choice, there is little you can do to compensate for a bad draw. Thereâ€™s an action that allows you to do this same thing, but itâ€™s a big risk when there are likely more beneficial actions to take instead. 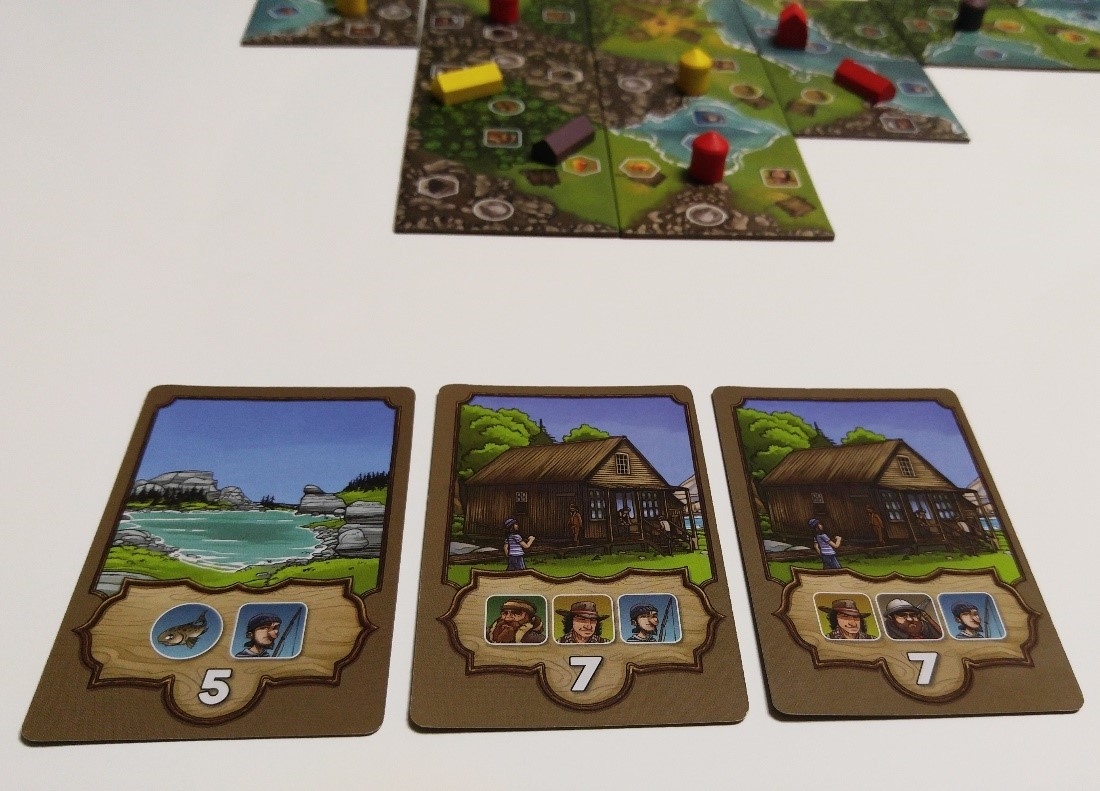 The game has sparks of that Carcassonne magic as you try to horn your way into territories and perhaps usurp the most influence and subsequent rewards. Unfortunately, if a territory isnâ€™t completed, youâ€™ll never receive rewards from it. Even though you try to make each building count, the reality is that several of your precious few will end up as abandoned as a Blockbuster Video. If the game went on for longer or you werenâ€™t forced to place a building each turn, this might not feel so bad. On the other hand, the snappiness of Okanaganâ€™s play length, regardless of player count, is an obvious strength. Though the sprawling landscape is more satisfying with more players, the gameâ€™s fundamental feel or length doesnâ€™t change much.

Okanagan is best described as comfortable, with smoothly filed edges that feel safe and familiar. At the same time, a sense of disappointment creeps in as Okanagan fails to push much beyond its recognizable influences. In many ways, Okanagan is the game I was looking for 10 years ago, but not one that is going to stick with me today.