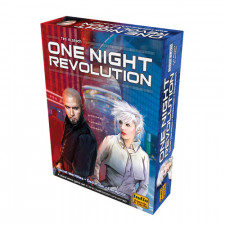 The announcement of One Night Revolution was met with much hype and lofty expectations. It would combine two of the social deduction genreâ€™s strongest titles, One Night Ultimate Werewolf and The Resistance, to produce a power couple comparable to Brangelina or Kimye.

Yeah, that comparison just made me throw up a little in my mouth too.

Itâ€™s easy to overlook but you must realize that this game has nothing to do with The Resistance beyond setting. What this title really amounts to is a One Night Ultimate Werewolf 2.0 with Indie Boards and Cards dystopian theme dressing it up. In theory thatâ€™s extremely promising and still worthy of the attention and expectations.

The structure of this game from a detached view is identical. It features a night phase where players close their eyes and perform special actions depending on the role they were dealt. This consists of swapping and stealing playerâ€™s allegiances, viewing the Identity of others, and generally spreading tidbits of knowledge to spur discussion.

This discussion often breaks down into full-fledged argument during the day phase when everyone wakes up and can start talking. A timer running in the background keeps you on point and pressures players into deciphering the current situation and who is on what team. When the buzzer goes off players have to vote with their finger on who they want to execute, with the goal being to nail the other team via majority. Confusion and misinformation often skew results unpredictably and provide much of the enjoyment.

The main problems with the otherwise fantastic One Night Ultimate Werewolf is that the clunky nature of several of the mechanisms. During the â€œnight phaseâ€ when players close their eyes and open them intermittently to perform special actions in secrecy, the game is reliant on a narrator or the official mobile application to facilitate the sequence. This is 100% a necessity and it can be awkward and off-putting.

Playing at a convention or in a crowded game store with your phone firing off Eric Summererâ€™s voice and creepy background howls will draw eye lasers from the Euro-gamer crowd and may even get some rotten fruit tossed your way. Worse yet, the players themselves may miss their cue from other noise cutting into the play area. Finally, no oneâ€™s supposed to know if a particular role is even present in the game so hearing another player shuffling cards about is in and of itself a major problem. Most fans of the game are willing to overlook these flaws because itâ€™s so damn good.

One Night Revolutionâ€™s trick is that it throws Eric out the window and slams it shut. Instead of a narrator, each player takes their turn in clockwise order during the night phase performing the specialist action of whatever role they were dealt. You simply announce when youâ€™re finished and the guy sitting to your left takes his turn. Simple, easy.

The roles are pretty interesting here as it features some of the old standbys from One Night Ultimate Werewolf such as the Troublemaker (Reassignor), Robber (Thief), and Seer (Investigator). The new Signaler role is my favorite as it forces you to tap the shoulder of a person sitting next to you. This provides for direct confrontation early as it affords a juicy opportunity to lie

Farther streamlining occurs in that your identity â€“ whether youâ€™re on the subversive Rebels or the infiltrating government Informants â€“ is divorced from the specialist role. In One Night Ultimate Werewolf the Troublemaker is always on the Villager team, but the equivalent here, the Reassignor, could be on either. Thatâ€™s a huge change with a whole host of implications that really make this an altogether different experience than its predecessor.

The removal of the tie between identity and role allows for a smoother opening sequence as you no longer deal out three extra roles to the middle of the table. Instead, the uncertainty concerns extra identities (Rebels/Informants) placed in the middle to keep you guessing. This sounds great in theory and it means you no longer have to worry about hearing other playerâ€™s actions at the table because every selection that you began the game with will be in play.

Unfortunately these large changes to structure soften the spark of the design and gut out depth in favor of ease of play. By not offering extra seeded roles at the center of the table, players have little incentive to lie as they know another player will call them out. You still can of course claim a role you donâ€™t own, but you may be wasting valuable time throwing doubt on your trustworthiness when you need to be unraveling the puzzle and figuring out who to side with.

The biggest travesty is the lack of depth concerning the manipulation and evolution of the metagame. One of the strongest aspects of One Night Ultimate Werewolf is that you can partake in risky gambits to ferret out the enemy. As a member of the village team, itâ€™s a solid play to lie and claim Troublemaker just in case itâ€™s in the middle. If you get called out as a liar you can fall back on this defense and thereâ€™s a solid chance that your accuser is telling the truth. This ability to take chances as a player on the good team is a very unique element of the design and one not found among its peers.

The deception here typically centers on which side you are on as opposed to which role. The roles here perform different actions depending on which Identity the player possesses (Informant vs. Rebel), and the untangling of these possibilities becomes the focus of the game. This process and discussion isnâ€™t completely flat but the social maneuvers arenâ€™t as dramatic or entertaining and everything is flattened out and made a little more mundane and dull.

Itâ€™s difficult to swallow a design that touts a major streamlining when it comes at such heavy costs. The game almost feels over-developed to satiate a portion of the crowd that didnâ€™t quite get One Night Ultimate Werewolf, and its content with providing a more shallow and unfulfilling experience as the cost of doing business. One Night Revolution is not a terrible game, but itâ€™s one that really doesnâ€™t have a place and never finds its way.