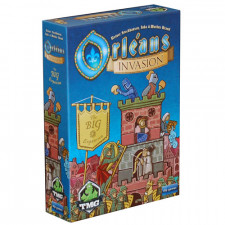 Typically, an expansion adds a few new items, throws in some randomizing elements, and perhaps gives the players some more action choices. Itâ€™s rare that an expansion takes an existing game and simply reinvents it. And that is essentially what Orleans: Invasion does. It takes the existing framework of Orleans and creates new modes of play. Thereâ€™s a new competitive scenario, a â€œDuelâ€ version for just two players, and three different solo modes. But the big variant, the one that the expansion is named after, is Invasion â€“ a totally cooperative scenario for up to five players.

"Wait, five players?" you might ask, knowing that Orleans: Invasion doesnâ€™t include the material for a fifth player. That is something sold separately by DLP or which came included in the Deluxe Version of Orleans put out by TMG. But, if you have the fifth player pieces from the base game, Invasion has all of the extra bits youâ€™d need to add that fifth guy into your expanded games.

First, a word about the non-cooperative modes. Prosperity is a fun competitive mode for all new players. Thereâ€™s now a Carpenter on the board and each player has a chance to move him and build special buildings. In the two-player only Duel mode, you care less about points and instead race to complete four objectives. And the three solo scenarios are races to grab citizens or complete objectives. 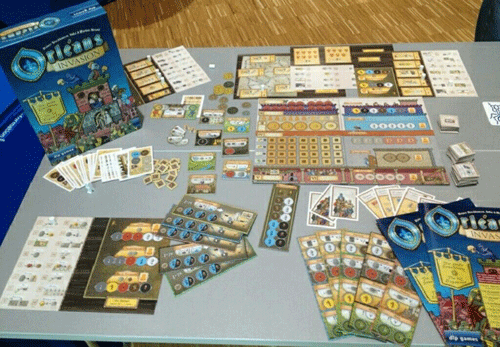 They certainly didn't skimp on the materials- enough for an entirely new way to play.

Now, letâ€™s turn to the big version â€“ the Invasion scenario within the Invasion expansion. You can tell itâ€™s the main variant simply by component quality. Whereas the other scenarios have additional boards on card stock, Invasion goes for solid cardboard. And if you like cooperative titles, you should absolutely look into this- itâ€™s fantastic.

Invasion gives the players six new objectives that they have to fulfill before time runs out. They have to send a certain number of knights to the city wall, donate coins to the treasuries, obtain citizens, stock the warehouses with goods, and build fortified cities in surrounding towns. Those five are in common. But then each player is also given a personal objective. In order to win, all players must accomplish their personal objective. If even one falls short, then everyone loses.

The change in the goal masterfully swaps out the competitive feel for a cooperative atmosphere. Suddenly, the race to grab workers is off. Instead of snapping up that last Craftsman or Scholar, youâ€™re conferring with your fellow players. Does anyone need it more than you do? Instead of racing for points, youâ€™ll often try to divide and conquer with players divvying up the common goals and assisting when they are able.

Instead of the standard events, a new set of tiles is used specific to the scenario. The event tiles are semi-randomized and you only use a subset each game. So you wonâ€™t know for sure if a particular harmful or helpful event is in the mix. In other words, you canâ€™t simply wait for a harmful one to pass before starting a goal in earnest. That harmful one may not be in there at all, and you lost out on all that time for nothing.

But the most amazing thing is how well the Orleans system adapted to the needs of a cooperative game. The major feel of Orleans is time pressure. You only have 18 turns, and while that may seem like a lot, itâ€™s practically nothing. If you spend too long working on your engine, getting it to peak point-generating capacity, then youâ€™ll have only a few turns to actually run it and miss out. Similarly, if you donâ€™t build your engine at all, youâ€™ll be likely to stall out by the end. Itâ€™s a careful balance of preparing just enough, and then tweaking it while you attempt to accomplish your goals.

And that translates amazingly to a cooperative system. Youâ€™ve got a lot to do in Invasion. A lot. If your bag was just a little more efficient, you might be able to burn through those goals. But every turn becoming more efficient is a turn you didnâ€™t focus on finishing your objectives. And there are only a limited number of turns in the game. That same pressure is wonderfully preserved. Invasion feels like a cooperative Orleans and not a cooperative game shoehorned into an existing system.

If youâ€™re a fan of Orleans, then Invasion should be high priority for you. Itâ€™s not exactly a necessary expansion. The base game is great on its own. But the expansion takes that base system and pushes it into new and interesting design and decision spaces. It squeezes into alternative modes of play and the result is a more interesting game, with even more options for play. Definitely worth a look for any Orleans fan.