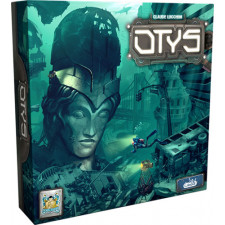 Some things are appreciated more for the way they look or work, independent of any practical utility. For example, the slinky has always fascinated me. How did it prove so popular? Itâ€™s pretty useless, even as a toy. Yet its novel mechanical simplicity took a post-war America by storm. Or more diluvianly relevant to this review Iâ€™m reminded of Ariel in the Little Mermaid and, â€œLook at this stuff. Isnâ€™t it neat? Wouldnâ€™t you think my collectionâ€™s complete?â€ Her cave was full of gadgets and gizmos that looked fascinating, but devoid of their real purpose didnâ€™t really do anything interesting.

Otys certainly has an intriguing gizmo central to play which is admittedly pretty neat. Individual player boards are slotted and grooved so that you can slide component tiles up and down and side to side as you resolve actions. Like the slinky, itâ€™s novel simplicity works remarkably well. The gratuitous design keeps everything in place and visually intuitive, identifying what youâ€™re doing, with whom and where.

More specifically, the what is gathering resources from the bottom of the ocean, a reverse of Arielâ€™s dry land to ocean depths museum collection. Itâ€™s c. 2150 and humanity, heedless and dismissive of all warnings, has irreparably damaged the environment, causing sea levels to rise and engulf the earth. Itâ€™s a caricatured Waterworld, without the political Exxon Valdez ramming down your throat or, worse, Kevin Costner. The few survivors live on floating colonies - like Otys - retrieving whatever useful remnants they can from that doomed world to sustain their own. 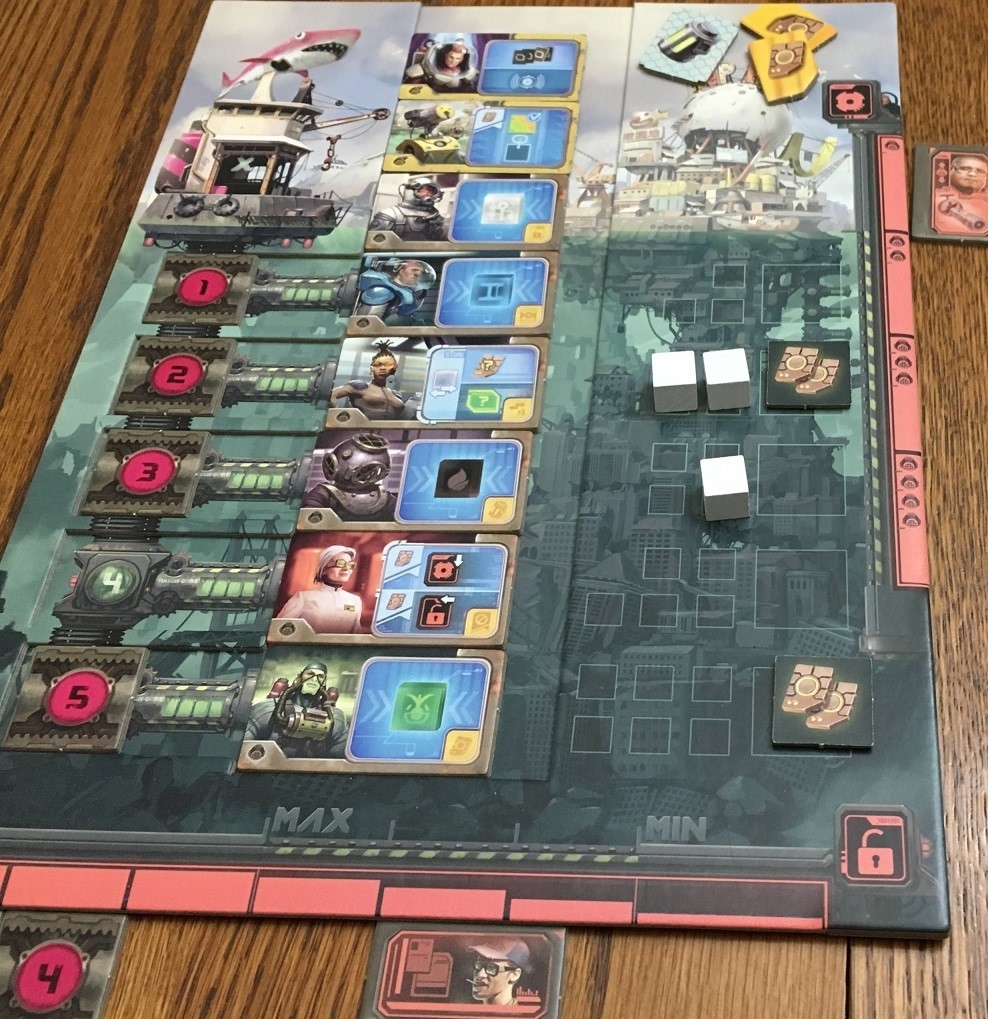 To obtain these resources you use eight unique divers. They begin the game randomly stacked in a slotted cutout on your individual platform board. The top three are on the surface, while the others occupy different depths. The entire stack slides up and down as divers work. Each of the five levels beneath the surface also have horizontal slots for a gate key tile which can slide back and forth to open that level, indicating where you are diving.

On your turn you activate one diver in the water which triggers two effects. First, all levels correspond to a communal sponsor reward, which youâ€™ll collect immediately. Then you resolve the specific diverâ€™s ability. Four of these collect one of the gameâ€™s specific resources, which is deposited in the row at which the diver worked. Once you gather specific materials at the same depth, you can purchase contracts, the gameâ€™s main source of points. The other four divers have unique benefits like gaining bonuses, or trading resources in a centrally simple supply-and-demand market.

The puzzle element involves triggering the right diver at the right level to garner the particular resource or bonus you need at the opportune time. Putting those pieces together can often be challenging, because a diver must resurface to the top of the slotted stack after working, pushing all the divers that were above them down one level. Also, when you open a gate, its key is removed and cannot be returned until youâ€™ve used a certain number of them or under a special circumstance.

There are elements that let you improve these tasks and manipulate your engine. Generic gate keys gain access to previously unlocked levels. Batteries allow divers to remain at depth after activation, or move up and down levels before performing their actions. And you can upgrade your hacker to retrieve used keys faster. There are also opportunities to obtain upgrades which improve a diverâ€™s work.

This optimization and efficiency exercise isnâ€™t new for modern Euro games. Slotted boards gimmick aside, manipulating your divers at the most opportune times is a mildly rewarding puzzle, but agonizingly slow. Often the optimal move isnâ€™t available because the right diver isnâ€™t at the proper depth and/or a level isnâ€™t accessible. Unfortunately the payoff isnâ€™t interesting enough to justify all the work. Youâ€™re pulling multiple levels only to finally gather a few resources to nab a contract. Thankfully boosts and bonuses supercharge your efforts, but acquiring them is surprisingly nebulous given the designâ€™s largely calculated nature. The major culprit are those sponsor rewards which shift every time a player uses a generic gate key. So if youâ€™re planning to maneuver a diver to align with a desired sponsor row, your efforts can be undone by the player before you.

Iâ€™m all for a bit (or lot) of chaos and players weaving a tangled web with every action, but this one element glaringly disrupts a design thatâ€™s otherwise entirely about solvability. There are several moving parts all within your control that can be stymied by that one central mechanism. That means the design will frustrate the hardcore efficiency-loving gamers itâ€™s seemingly tailor made for, while itâ€™s workmanlike process likely wonâ€™t attract players of other stripes. 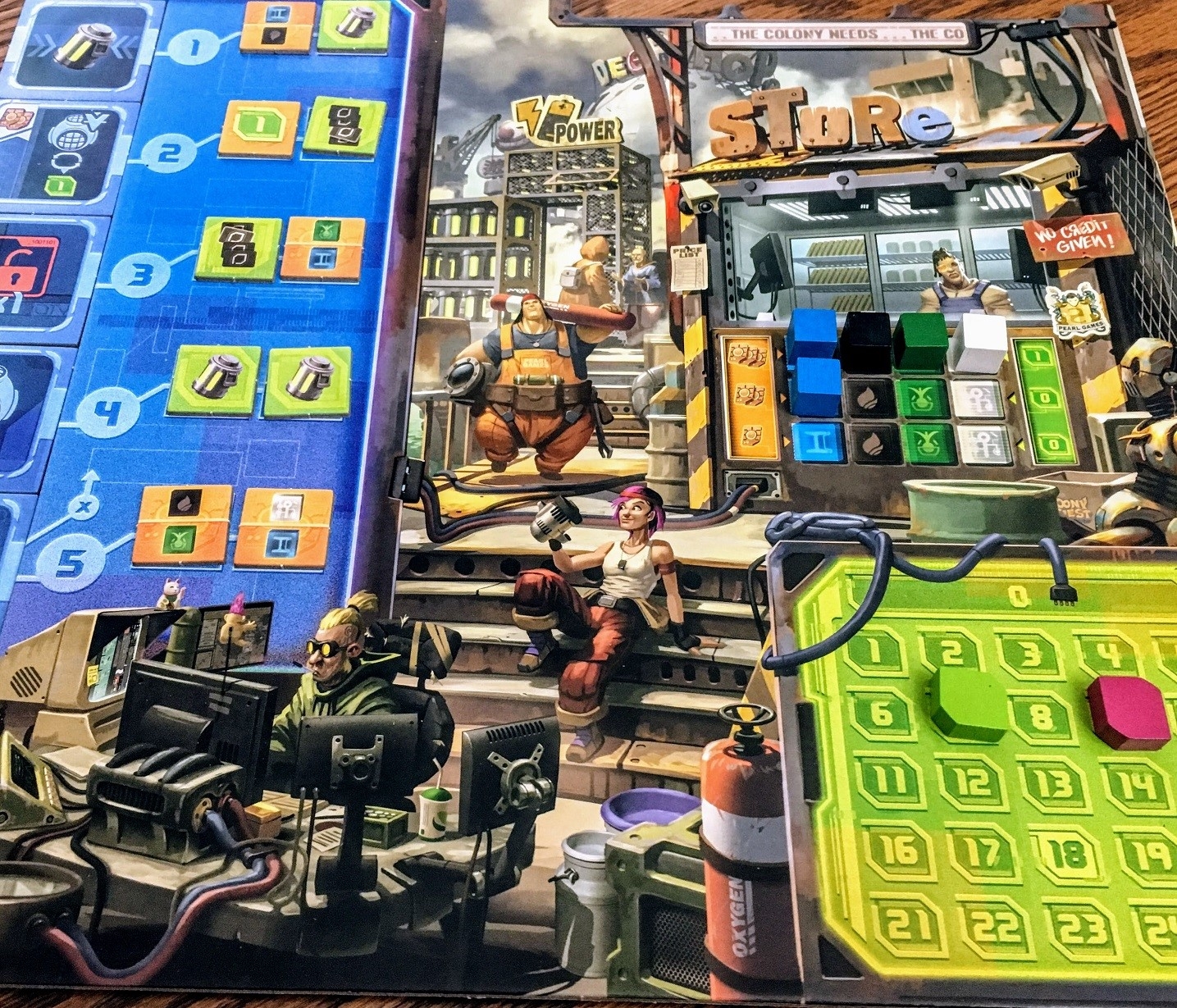 Exactly how you imagined a dystopian deluge to look like, huh?

Otys is one of the best and niftiest produced board games Iâ€™ve seen in a while, relatively speaking for a puzzling optimization Euro game. From its physical action resolution, eye-popping presentation and intuitive graphic design, it makes an impression. Yet game play falters. It all works mechanically. And the bells and whistles have a purpose. Itâ€™s just not a compellingly new or interesting one. Like Arielâ€™s gadgets sitting on her shelves, its design mechanisms are ultimately more admirable than their cube-collecting gaming utility.