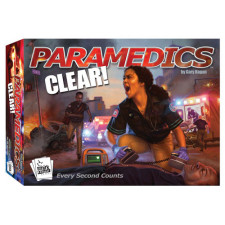 Critical Hits: Exciting, funny gameplay with a sense of urgency appropriate to the concept.

Uncertainty is a key element in games. Making decisions with imperfect info creates uncertainty, tension and fun, and Paramedics: Clear! simulates the chaos of an emergency race to save wounded patients using an EMTâ€™s real-life nemesis: the ticking clock. Grab your friends, load your ambulance, start the timer and be ready to juggle medicine, triage wisely and yell a lot. Itâ€™s time to save lives.

Yes, the game has an app, but donâ€™t let that scare you, purists. Itâ€™s a glorified stopwatch with some sound effects added, so an unlimited data plan isnâ€™t required to play the game. Two to four players set up their boards, choose a first player using the gameâ€™s default rule of whoeverâ€™s been most recently injured (great idea) grab some patients and start the timer. As the telemetry timer counts down to the end of a turn with each heartbeat, would-be lifesavers administer aid to one or two patients suffering from a wide, and often comical, variety of ailments. 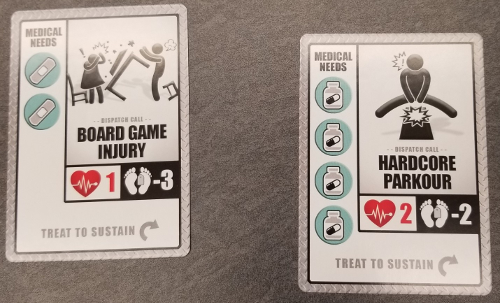 The struggle is real

Hereâ€™s where another real-life aspect comes into the game. Each patient must be helped in some way every turn, or theyâ€™ll die, so even if you donâ€™t have all the gear you need to completely treat them, you have to find a way to keep them stable until your turn comes around again, and that feels like being a paramedic. Canâ€™t move you yet, maâ€™am, but weâ€™ll keep you stable for now. Iâ€™m sure getting hit by a meteor stings. Just hang in there. 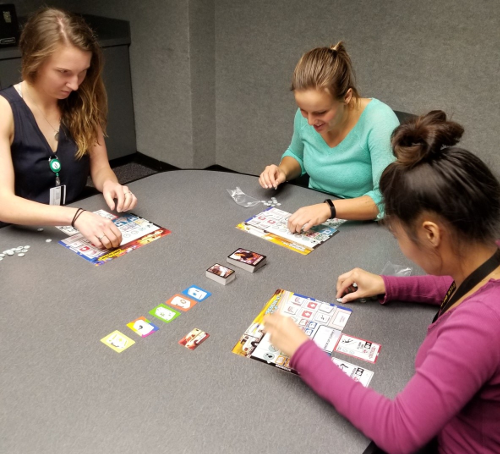 Meteor Balm is totally a thing, I swear

Managing your workload is a key part of the game, whose title Iâ€™m not going to type again because it messes with Word. Getting a patient to the hospital earns you VPs at the end, but also means another oneâ€™s coming, and if you donâ€™t have time to stabilize them, they get shifted to the morgue, which is not nearly as sexy as the CW network makes it seem. So even if you can complete their treatment, it might be the smart move to delay a turn and set yourself up better for next time, especially if a shiftâ€™s about to end, since each of the three shifts is shorter than the one before. The combination of real-time treatment and long-term thinking makes Paramedics: Clear! a fast-paced, entertaining bit of multi-player solitaire with a couple mechanics thrown in to try and encourage player interaction, one of which fits and the other doesnâ€™t.

Each time a player sends their main patient to the hospital they draw two new ones, choosing one to try and save and another to offload on another medical team. This fits the theme, since an overloaded ambulance crew may call in additional help, and provides a bit of a chance to screw your fellow players by offloading a low-value, complicated patient on them. Granted, the clockâ€™s ticking, so thereâ€™s not a huge amount of time to spend deciding, but it does slip a bit of interaction in. The other mechanic, which feels tacked on, is the color-matching card play to acquire new medical supplies by trading either with the mystical common supply row or with other players via yelling, card-waving and their good graces. Each player board has different color combinations for different supplies purely to encourage this interaction, and it feels a bit incongruous since youâ€™re all out â€œon callâ€ in the city, and at the same time, near enough to each other to swap supply cards. 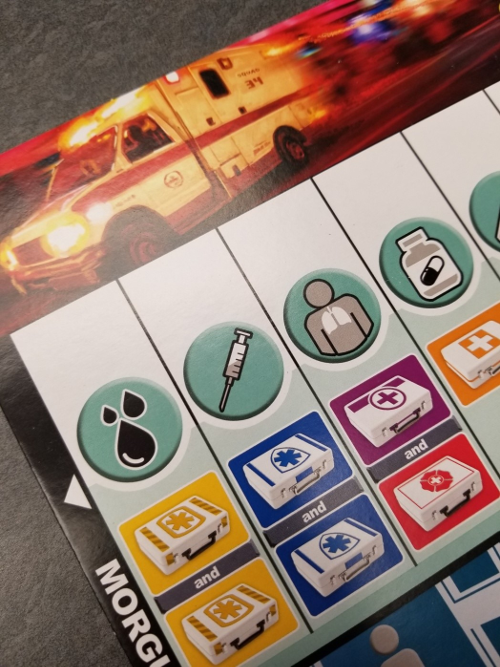 Then again, strange stuff happens in the world today, and this is my biggest beef with the game, so itâ€™s easy to overlook. On the plus side, the lack of interaction means the game scales well at all player counts, and even works solo.

Paramedics: Clear! may drive me crazy on the page, but it drives craziness in a good way on the tabletop. Playersâ€™ heart rates actually elevate when their turn starts, and the ticking clock not only prevents AP but actually lends a legitimate feel of being on duty in the streets, assessing the situation, stabilizing patients and planning for their safe transport to the hospital, all while setting yourself up for future shifts and readying your crew for whatever random injury comes your way. It blends humor, fast-twitch play and long-term preparation to create rapid pulses, replay value and the satisfaction of knowing that whether the injury was caused by a meteor strike, a rage-quit table flip or an old-fashioned robbery, theyâ€™re not going to die on your watch.