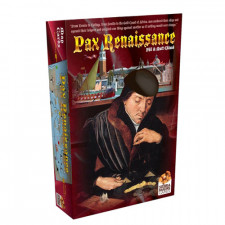 Pop Quiz! Which was the dominant force of change during the Renaissance: class, religion, or state?

If your answer was something along the lines of, â€œThatâ€™s a stupidly hard question to answer,â€ then Pax Renaissance might be the sort of game that will swell your cranial matter the way Michelangeloâ€™s The Creation of Adam featured a floating brain being treated like a clown car by a bunch of chunky angels. The exact same way.

Hereâ€™s what I mean. In Pax Renaissance, youâ€™re cast as a European banking house bent on getting ahead, making smart investments, and determining the philosophical future of the entire world. And that isnâ€™t hyperbole. Your actions will marry princesses to emperors, sweep away kingdoms in lieu of new republics, spark religious wars that might last centuries, give rise to sweeping peasant rebellions, or maybe just engage in some light piracy and assassination. By the end of its two-or-so-hour session, the landscape of Europe and the Near East will be irrevocably altered.

The game of kings, other than chess, but using chess pieces.

What makes all of this so heady â€” and so intimidating â€” is the fact that your influence is nearly always sharply limited. The map is speckled with centers of influence, each represented by a differently-colored chess piece. There are rooks for the lordly classes, pawns for serfs or merchants, bishops making pilgrimages between cards, and knights standing in for, er, knights. As far as visual languages go, this crisp shorthand makes the gameâ€™s map uniquely legible. A stack of black knights over in Byzantium means itâ€™s largely Islamic and might be able to project power into neighboring states, while seeing France dotted with a sedentary ruling class of pudgy Catholics might be an invitation to chip away at its power base in an effort to tilt the entire country into a full-blown Reformation. Pirates squat atop trade routes, heretics appear in the countryside, and armies or ruling classes assemble. All bear their own import. Sometimes multiple imports.

And yet most of them are never directly under your command. This is a game of nudging from the shadows rather than calling the shots directly, and this is where Pax Renaissance goes from pedestrian to gripping. That pack of Catholic knights in Hungary? One minute theyâ€™re an army willing to invade an adjacent kingdom for the right price. The next theyâ€™re religious fanatics bent on purging the heretic and plunging the region into theocracy. Even when their state is firmly under your thumb, perhaps someone else will come along, cultivate mercantile connections to the royal family, and vote the kingâ€™s ear to bend their direction instead.

Welcome to the Counter-Reformation. Register for your stake-burning on the left.

Itâ€™s no surprise, then, that while much of the game revolves around the acquisition of power, the rest of it is about keeping it, leveraging it, massaging it until it works for you and nobody else.

With so many ways to approach victory, of course thereâ€™s a learning curve to climb. This wouldnâ€™t be a game by Phil Eklund if the rulebook werenâ€™t peppered with opinionated footnotes and obscure corner-case rules that wonâ€™t apply to ninety-nine out of a hundred games. Want to marry off a princess when all the eligible grooms have been picked as clean as a pastry shop during a peasant rebellion? Thereâ€™s a rule for that. Want to send a bishop to convince the repressed classes of England that their suffering will entitle them to a grand reward in the next life? Sure thing.

However, the great surprise of Pax Renaissance is that once its learning curve has been summited, itâ€™s a shockingly easy game to sit down and play. Even the previous entries in the series, Pax Porfiriana and Pax Pamir, donâ€™t run this smoothly. As some corrupt elephant-riding pope probably said, the game is in the cards. Most of the time, choosing what to do is as simple as taking a look at both markets â€” cards laid out in two rows, one for the West, another for the East â€” and deciding which one slots into your ongoing strategy.

The market knows what you need; knows it better than you do.

As I said, simple. Not necessarily easy. There are plenty of trade-offs and costs to weigh, not the least of which is the literal cost of a card in florins, which changes as cards go unpurchased. If a card is passed by enough times, it even goes up in value as florins accumulate atop it. And if you canâ€™t earn money by bullying the market in other ways, it might be time to convene a trade fair, which sends a huge wad of cash gushing along one of the gameâ€™s trade routes, slurped at greedily by any merchants or pirates placed in its wake. Watching a carefully-manicured trade route pull in a huge income while your opponents are forced to make do with the leftovers is one of the gameâ€™s greatest payoffs.

Not that itâ€™s the only one. The long hard walk towards victory permits all manner of drama in its own right. In one of the gameâ€™s five ways to win, youâ€™ll be tricking kings into surrendering their power to parliaments and other representative bodies, thus creating fragile republics that will need your constant shepherding. The holy victory requires a whole lot of bloodletting and the tactical removal of opposing bishops, commercial domination sees you creating trade monopolies that can crumble whenever somebody breathes on them, and propping yourself up as an empire-builder requires that you amass a list of titles and vassals that would make Charles V blush at the audacity of it all. Best of all, every path wends its way through moments of tremendous excitement, do-or-die wars or revolutions, crucial opportunities overlooked by opponents, and a final breath-catching push as a victory condition becomes available, avoids being blocked, and blossoms to fruition. Succeeding at Pax Renaissance is perhaps one of the greatest and most visceral feelings of winning out there.

In the end, thatâ€™s only one of the reasons that Pax Renaissance stands out as one of the most gripping games to appear in years. This is a title that respects your smarts even while itâ€™s demanding the entirety of your attention, a game bold enough to take a hard stand, even a flawed stand, on sticky historical issues, only to throw its hands in the air and show you a riotous good time rather than lecture at you for six hours. This is as dynamic, smart, and bracing as board games have yet to achieve.