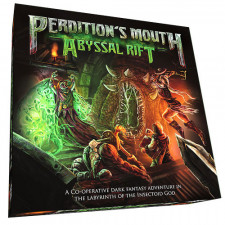 MB: Guys, we need to talk about Perdition's Mouth: Abyssal Rift, one of the most awkward - but not uninteresting - entries into the dungeon crawl sweepstakes. The thing about this design that is both compelling and frustrating is that it uses an entirely different language to describe the usual dungeon crawling routines. The designer is a Finn best known for Phantom League (a pretty good space 4x design) and Ameritrash saint Kevin Wilson has a credit, but there's a lot of talk about it featuring Eurogame mechanics. And it does feel like it is using different syntax than most games in this genre. I mean, the game has a rondel that would make Mac Gerdts proud. A huge part of the game's co-op impetus is in tightly restricting player choice. There are no dice. And it's all about saving people from a weird cult and some bug-things that make me think of Rust Monsters and Carrion Crawlers. Where do you stand with this somewhat odd game?

BC: I love it. Full disclosure: I was a late-stage playtester for the game. As soon as I saw the Kevin Wilson credit (Android is one of my favorite thematic designs) and the Euro-inspired mechanics, I knew I had to have it. I love immersive, narrative-rich games, but I hate the randomness and uninspired design spaces that usually accompany them. If you look at the popular dungeon crawls, they all use pretty much the same set of mechanisms with a little twist here or there, and the result is typically a shallow decision space and a heavy reliance on dice for excitement. Perdition's Mouth, with its rondel, reinvents the wheel of tactical fantasy combat. What's interesting about Perdition's Mouth is that the end result of players' turns sees their characters doing the things as all the other dungeon crawls--moving, drawing line of sight, attacking, and looting treasure--but the mechanisms that get them there are a lot more intricate and subtle. It's more of a Rube Goldberg puzzle, and in a way I really enjoy. In the end, my only turn-offs are the traditional dungeon crawly stuff that's still in there.

CT: I'm definitely a fan. The weirdness and alien feel is what really drew me into committing to these unusual mechanisms. I really enjoy the way all of these messy elements-an action rondel, personal character decks, an enemy response deck, etc.-work as a funnel to distill a pretty tight knit and focused narrative experience. A Rube Goldberg puzzle is the perfect way to describe it, but the continued focus on legitimate cooperation and discussion is what really makes it fly. All of those subtle and opaque elements mean there's much to discuss and chew on which really emphasizes the cooperative nature of the game. This is the largest philosophical departure and a major aspect of its personality for me. That oddball insect cult setting is just icing on the cake.

Not even rondel king Mac Gerdts has dared to attempt the DOUBLE rondel game- one for the heroes, the other for the enemy AI.

MB: But this whole "Rube Goldberg" element is where it gets sort of awkward too. It is totally true that you've got all of these messy and almost disparate elements that come together and there is a focus on genuine cooperation- because everyone on the team may not be able to do the "optimal" thing. It does by limiting the action selection sort of artificially. So you've got to decide who is going to do what collectively- which is normal for the genre- but then you've got a limited number of spaces for each kind of action and you may not be able to reach the action you need. But all of that floats a pretty heavy question- is there any diegetic reason two characters can't do the same thing? Or is it simply gamey? BC: I would point out that there's nothing that makes rolling dice inherently more appropriate or realistic. Traditional mechanics blend into the background due to their familiarity, but they're just as artificial and "gamey." The way I understand the rondel is that it's meant to simulate the close quarters of the weird underground labyrinth. Heroes bump elbows or step on each other's feet, making it impossible for everyone to do everything they want. Of course, that's total BS. In reality, the game's designed this way because it's fun.

CT: Yeah, I think this is the hang-up that's going to cause most to stumble. Most folks' opinion on Perdition's Mouth is going to be determined how they they take the rondel-based action selection system. The rest of the game isn't as idiosyncratic and is much less likely to cause a reaction one way or the other.

MB: It is definitely going to be a make or break element for some players. That is a great comment that Byron made about dice, and it is one I've used myself to defend various game mechanics. It's not a simulation, it's a game. And it is fun. I think that, as odd as it is and even though it does disconnect you from the narrative, it works in creating a unique game-space in a typically overworked genre. It does feel a little labored, and possibly overly restrictive, but it results in entirely different sorts of decisions than you usually have to make in these kinds of games. 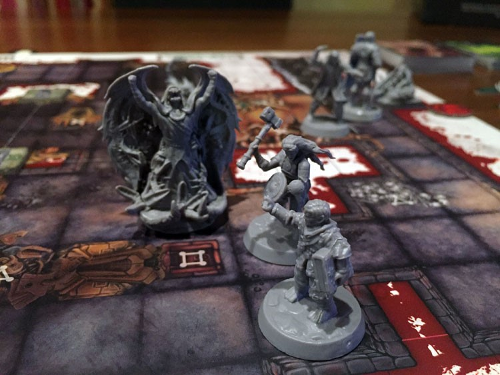 Trust us- it's weirder than it looks.

CT: It simply works for me because it's interesting and approaches the problem of providing tactical challenges in a unique way. The thought process and how you approach the action wheel is very similar to Mage Knight while providing a similar level of satisfaction. It feels as though you're solving a puzzle which could unleash a combo of maneuvers that slices up the enemy. Watching these big moments coalesce can really propel the experience into an engaging payoff, regardless of the enigma the game presents. That's the key to this whole crazy contraption actually keeping you engaged.

MB: The Mage Knight comparison is right on- one of the things that makes this game feel different is that sort of tactical, puzzle element. It's a more thoughtful dungeon crawler in some ways, and I think that might cause some discontent among those who want more freewheeling, hack and slash action from a game like this.

BC: Another thing that might divide potential players is PM's nihilistic, for lack of a better word, approach to campaign play. You can play Perdition's Mouth as a campaign or even link up multiple campaigns with expansion material. But where fantasy conventions would lead you to expect character growth between scenarios, gaining new abilities to match the increasing threat of the enemies, Perdition's Mouth only allows your characters to degenerate. Taking damage puts wounds such as missing fingers, broken legs or even parasitic infections in your characters' decks and these persist between plays, gradually weakening the party. Death is permanent, too, so as you get deeper into the labyrinth and face ever-increasing hordes of ever-dangerous enemies, your own situation becomes increasingly desperate. It's an atypical choice that some players will hate, but I think it fits the game's grimdark setting.

MB: I would add that this is the only game I've ever played where a vasectomy is an injury.

CT: It certainly helps instill that sense of dread as your general condition slowly decays. Or you are rendered sterile.

MB: It's easy to point at Dark Souls as an influence here, but it's really more like Darkest Dungeons, for those who have played that excellent video game. I really like the bleak concept and the notion of characters falling into decrepitude or disability. I think that is actually a brilliant way to circumvent the usual problem in these kinds of games where they tend to get easier as the players' power level increases.

All that said, there are some aspects of the grim setting that I don't care for. I could do without bloody, naked ladies in cages for example.

BC: It's a weird blend of progressively edgy and less mature edge-lording. I know the creator fought very had to ensure that the witch hero in one of the expansions was fully nude and morbidly obese. A lot of the characters and images break the mold of fantasy roleplaying stereotypes, but there is no doubt that there are some things that appear to American eyes as distasteful.

CT: I'm with you. I enjoy the weird insect cult thing going on, but there are immature elements peeking through at times. I don't think it's too overwhelming or coming at you from all directions-it's more of a couple of poor choices that creep in. It's something you have to be willing to overlook so that you can focus on the toothy gameplay.

MB: So let's sum it up here. I think we all agree that this is a challenging sort of design, doing some interesting things within its genre. It's a little messy (in more ways than one), but it is ultimately a fascinating piece of design that those who want a more forward-thinking, progressing dungeon crawl would do well to check out.