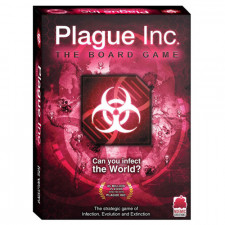 Plague Inc: The Board Game Review

Disease is misery. As I write this, Iâ€™m getting over a three-day cold. At least, I think Iâ€™m getting over it. If NDemic Creationsâ€™ hit app Plague Inc. has taught me anything, the fact that my symptoms appear to be in remission might mean Iâ€™m about to die from Total Organ Failure. 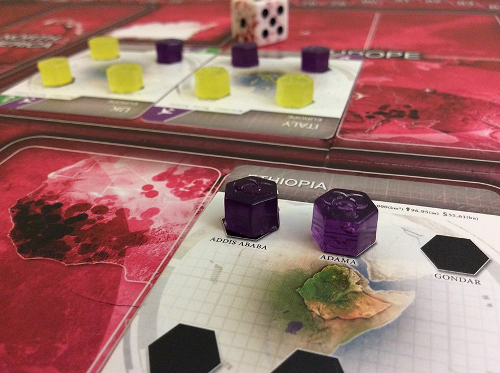 Sickness may be the closest thing the real world has to pure evil. And evil, like sex, sells. It doesnâ€™t matter that the strategy becomes rote after a few plays or the game drags on too long with too little player input; NDemicâ€™s evil concept of playing a disease bent on total human annihilation has proven popular enough to infect over 85 million players. Now, the world-killing virus game has evolved a new mode of transmission: cardboard.

Plague Inc: The Board Game is not a simple replication of the app. Rather than a game of cat and rabid mouse against the CDC, the tabletop game is a friendly competition between microbes, each trying to infect and eradicate the largest fraction of humankind. As a potentially lethal bacterial or viral strain, youâ€™ll spread your infection from country to country by placing semiopaque plague tokens on spaces representing major cities. At the start of your turn, youâ€™ll earn DNA points for every country your disease controls by having or tying for the most infected cities. These DNA points are the ultimate goal--only the most sophisticated, worldly pestilence can be crowned the End Plague--but they can also be spent on your turn to evolve new Traits for your disease, such as Heat or Cold Resistance, new modes of transmission, or increased Infectivity or Lethality.

Once all cities in a country have been filled, itâ€™s only a matter of time before that country is wiped off the map. At the end of each turn, for every fully infected country you control, youâ€™ll roll the Death Die. If you roll equal to or less than your Lethality, the country is eliminated. This earns infecting players some DNA and other key benefits right now, but itâ€™s also kept as a trophy for calculating end-game achievement scoring, which is often the deciding factor in the gameâ€™s outcome.

The app centered around the balancing act of trying to maximize your diseaseâ€™s Infectivity to quickly spread through the worldâ€™s population while keeping your Severity low enough that governments wouldnâ€™t implement quarantines, cure research or other serious countermeasures. The board game walks a similar tightrope. Early on, youâ€™ll want to keep infected countries alive so you can keep milking them for that sweet, sweet DNA. But if you donâ€™t kill those countries eventually, youâ€™ll run out of plague tokens to place, and your disease will stagnate. Additionally, if you share control with another player, youâ€™ll want to gank the country on your turn so that you can claim credit, which goes toward achievements like Continent Killer and Ultimate Wipeout. 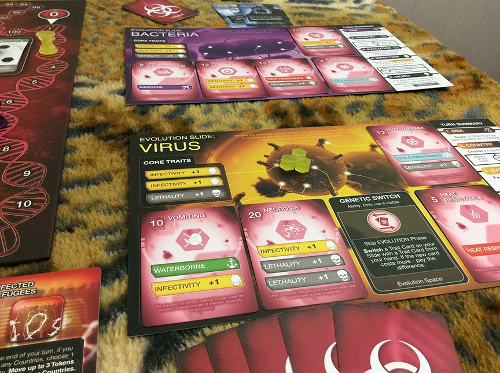 The real reason youâ€™ll want to make like the Black Death and decimate is because killing a country rewards Event cards, powerful one-use abilities of the â€œtake thatâ€ variety. Play Soap Shortage and increase your spread, or try Execute Infected to remove a troublesome opponent. Events are awarded to all players who infected the country, whether or not they pulled the trigger, so they also provide incentive against self-quarantine and keep the playing field nice and messy.

Plague Inc. is overproduced in the way only Kickstarter games can be. Barely readable details on the country cards name major cities and provide demographic info. The Death Die looks like itâ€™s been sprayed with bloody sputum. The custom-shaped plastic plague tokens, each imprinted with a tiny biohazard symbol, are nearly indistinguishable from candy (which is exactly what a plague-carrying board game would want you to think). And player boards are double-sided to allow you to choose your pathogen: the bacteria side is simpler, with a small but persistent boost to DNA production, while the virus side is built for rapid and unpredictable mutation. Considering that the app now has 12 different disease types, this leaves NDemic lots of room for expansions.

Thereâ€™s a natural timer with country cards that must be played or discarded each turn, but when they run out, the game goes into a â€œsudden deathâ€ mode that should be called "kill me now." Like any illness, it lasts far longer than is proper. But it still beats a sore throat.