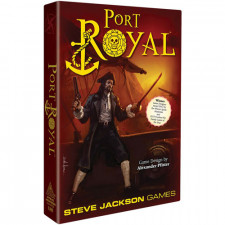 Critical Misses: Weak use of the pirate setting.

The problem with most filler games is theyâ€™re so insubstantial Iâ€™d rather just have a good conversation until weâ€™re ready to play the next full-length game. Yes, introverted as I am, Iâ€™m still not so socially inept that Iâ€™m unable to talk about games, life, or whatever with my friends for ten minutes to the point where I have to pull out Love Letter every time the conversation hits a lull. If these kinds of games tip the other way and end up being too heavy, however, they feel too stuffy and serious for the kind of tone I look for in a 20-30 minute filler game.

Port Royal strikes the right balance: light enough for conversation but enough decisions on each turn to feel like an actual game.

When I win a game of Port Royal, Iâ€™m never sure if I was just smarter than everyone else at the table, or if I just got stupid lucky, though I suspect the latter. But thatâ€™s part of the charm. The purity of the push-your-luck elements, coupled with the light engine building, make for a game in which you look forward to each flip of the cards.

On your turn, youâ€™ll keep revealing cards until you decide to stop and buy a card or until the pirates attack and youâ€™re forced to end your turn with nothing. Embarrassing! Donâ€™t let it happen to you! While itâ€™s a simple mechanism seen countless times before, thereâ€™s some subtlety in the implementation here. Since other players get to buy after youâ€™re done, you want to reveal enough cards that youâ€™ll have something good to pick up while not revealing so many that your opponents have a beneficial purchase when it comes â€˜round to them. 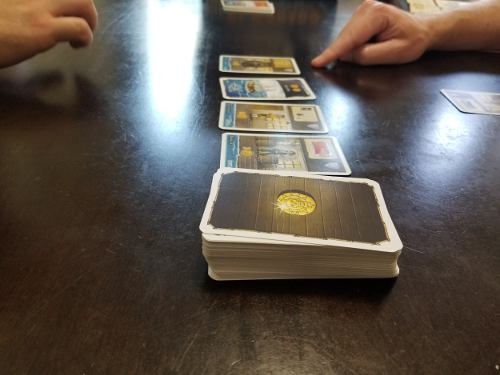 The deck! What dangers lurk beneath its shuffled surface?

Therefore, each card draw has several factors: am I likely to reveal one too many pirate ships and end it all? Is there a card lurking in the deck my opponent desperately needs? Do I (or the other players) have any cards that interact with the row in a particular way I need to be aware of? Itâ€™s exactly the kind of multi-dimensional decision that drew many of us to tabletop gaming in the first place.

It may sound like a lot to think about, but like any good game of chicken, luck often rules the day. The bold players who throw caution to the wind and wait until they see a high-value ship or the perfect card to fill out their engine will usually do wellâ€”except when they donâ€™t. Except when the winds of fortune are not at their back and they go bust every turn. Except when theyâ€™re riding high with almost no chance of drawing the green pirate shâ€”aaaaaand itâ€™s the green pirate ship. Of course it is. Itâ€™s the beauty of a good push your luck experience, and Port Royal absolutely nails it.

Itâ€™s purportedly about pirates, but itâ€™s not, and thatâ€™s okay. Itâ€™s still a heck of a game in a tiny package, and one I can wholeheartedly recommend for those awkward 30 minute gaps in your gaming sessions.