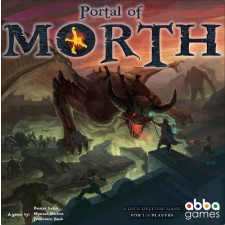 Portal of Morth, from Spanish publisher Abba Games, bills itself as a â€œdice defenseâ€ game but it is pretty clear from turn one that the designers set out to make a tower defense board game. Itâ€™s not exactly a novel idea, with everything from Castle Panic to Xenoshyft taking cues from popular casual video game concepts. But I donâ€™t know that Iâ€™ve seen a game to date that more specifically captures the notion of randomly generated â€œcreepsâ€ marching down lanes while players try to stop them from reaching a terminal point. And this isnâ€™t one of those where you build towers, itâ€™s more like one of the ones where you have mobile heroes racing around, trying to staunch the flow of monsters. Thereâ€™s even a simple â€œdollars for killsâ€ economy and a levelling system to give it some depth, like what you might see in one of the better digital tower defense titles. 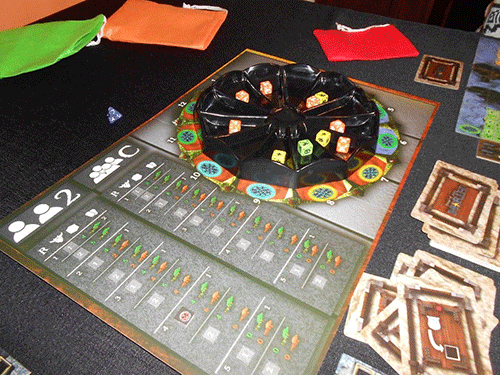 Instead of celery sticks and carrots, this tray dispenses deadly demons and minotaurs.

One thing I really like about Portal of Morth is that the designers seem to have started from scratch in their approach. They didnâ€™t plug worker placement and deckbuilding mechanics into the tower defense framework. It stands out in the crowd, and not just because it is packed with a terrifying number of custom monster dice similar to those in Wizkidsâ€™ Dicemaster games. It also features this goofy chip-and-dip tray style dice sorter that randomizes which lanes â€“ and which players â€“ get the pleasure of hosting a waveâ€™s monster parades. Each turn, an assortment of those custom dice that all represent different types of creatures of varying ability, speed and toughness are dropped over this tray. Then a D12 is rolled to spin it around just to make it even more random. The dice in a given section go to a lane on a specified playerâ€™s board. And you can also spend money to move the tray if you donâ€™t want to take on big batch of tough creatures.

Storyline â€“ yeah, whatever. Lord Morth sends out monsters, you counter them with heroes. It ainâ€™t fancy. On each playerâ€™s board there are four lanes and the whole thing is divided up into spaces. You start with two heroes, each with two different upgrade paths and varying attack patterns and abilities. These guys and gals move around the board and deal damage to the monster dice as they march down the lanes and if you kill them, you are rewarded with experience points and gold. The stronger monsters give you more of both, so the idea is to build up a monster-smashing economy over the course of the waves so that you get better and more efficient at moving your heroes around and halting the advance of bad guys with stronger attacks.

You can also buy more heroes â€“ up to two of each in four different classes. Thereâ€™s quite a lot to consider in this game because you are not only juggling the decision to spend money to bring in extra heroes or upgrade those you have, you are also having to take into account the fact that some monsters cannot be damaged by certain types of attacks, some heroes have special abilities like setting traps, and there is always the uncertainty of where the next wave is going to hit hardest. If youâ€™ve got two or three heroes on one side of the board and the wave is going to hit the entrance on the other, maybe thatâ€™s a good time to spend some gold to turn that spinner. 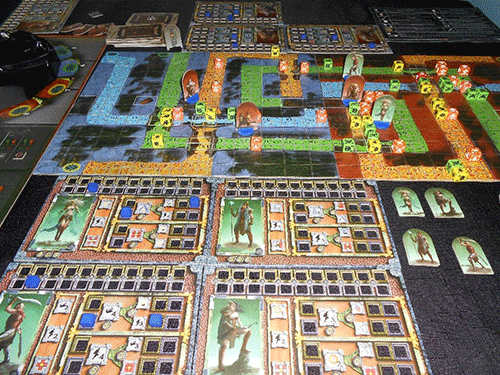 Weâ€™re a long way from Desktop Tower Defense at this point.

The core mechanics are fairly simple and fun despite some shaky rules translation and a sense of repetition that creeps in during the latter half of the game. Another thing Iâ€™m especially fond of in this design is that these basic mechanics support a co-op mode, a solo mode, and a full-on competitive game that brings in some nasty take that cards that do all kinds of things that help the monsters overrun your opponents. Iâ€™ve found that the competitive game is the best because I like aggressive take-that games rife with good-natured schadenfreude and laughter over thwarted plans. But those not so inclined might be more satisfied with the co-op game. Itâ€™s a fun 20 minute solo diversion, but youâ€™re not going to replace Mage Knight with Portal of Morth for lonely hearts gaming.

I like this game, it has an understated monster-bashing absurdity that I appreciate and I like that it is nothing like anything else out there. It does feel a touch rough around the edges (particularly in regard to the too-dark, too-murky visuals) and Iâ€™m not sure that itâ€™s going to have much longevity beyond a few plays. But while it lasts, this is one of those more obscure import titles that likely wonâ€™t see domestic release â€“ and that makes its novelty even more appealing.