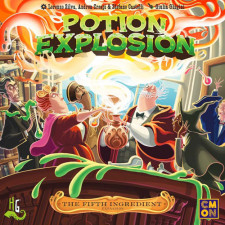 Critical Hits: Integrates nicely with the base game; wild marbles are very useful.

Critical Misses: Utterly inessential; emphasis on combos is a detriment.

Just as all great love stories begin, Potion Explosion had me from the moment I saw its marble dispenser. What I thought would only be style turned out to be substance. Potion Explosionâ€™s addictive puzzle, variety of potion abilities, and snappy gameplay were everything I hoped the game would be. It continues to be on regular rotation along with the fantastic app that Past Me was so excited about. When The Fifth Ingredient came out, I ran to it with the excitement that students usually reserve for the last day of class.

Adding to the previous four ingredients, Ghost Ectoplasm is the titular fifth ingredient. How exactly that is harnessed is beyond my corporeal comprehension, but what I do understand is how useful it can be. The white marbles act as wilds, allowing you to choose whatever color you want it to be when pulling from the dispenser. Sounds like thatâ€™d make the game too easy, right? Well my young, overeager apprentice, thatâ€™s already been considered. These marbles do not start in the mix of things. They start on the Ghastly Cauldron, where you will be able to swap them out for other marbles in your hand based on the effects of professors and/or potions. These two features are what make up the bulk of the new content. 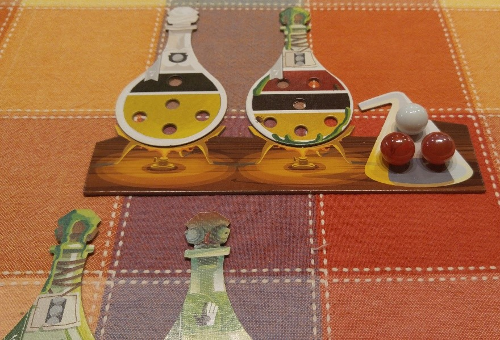 Ghost Ectoplasm is handier than it sounds.

At last, wizard school has hired some more faculty to help supervise all the lawsuit-waiting-to-happen alchemy that is going on in class. You can choose to play with one or two professors in your game. Each one provides an ongoing effect or triggers during a certain condition, often resulting in some extra flexibility or incentive during play. I wonâ€™t go into all seven of the professors, but here are a few examples. Albedus Humblescore (get it, Potter fans?) lets you discard two marbles of the same color to discard a Little Help (-2 points) token. Itâ€™s nice to be able to discard those penalty tokens, but it also takes away some of the risk. Making sure you ask for help at the right time was integral to playing well, but this turns that precarious decision into a â€œwhy not?â€ Overwhilma Explosiwa allows you to exchange an ingredient with one from the Ghastly Cauldron if you collect eight or more ingredients on your turn - a nice way to spend all those extra ingredients from a big chain of explosions. Lastly, Gideon Prissymann is that one professor you avoid taking a class from. He gives you a scolding (-1 point) token if any of your ingredients touch the table during your turn. This is more gimmick than I can stand, especially in a game that is already fighting that image, but some may enjoy the silliness of it. Just like in school, youâ€™ll like some professors more than others based on your personal preferences for how they change the game.

Now if the professors donâ€™t help you get some Ghost Ectoplasm, two of the four new potions will. The generically named Ghastly Concoction lets you do a straight up swap with the cauldron. Dram of Poltergeist Sweat (gross, by the way) allows you to steal an ingredient from an opponent and exchange it with the cauldron. The other two potions give you other ways to pull from the ingredient dispenser. Brew of Feather Touch lets you take two or more adjacent ingredients of the same color from the same row and Chameleonic Varnish allows you to declare one color in your hand as a single other color. I appreciate having a few more potions to choose from, but despite my many plays of Potion Explosion thus far, I was yet to be bored with the base selection of potions.

Though the new additions integrate into the base game fairly seamlessly, I never felt Potion Explosion needed more stuff. Sure, having the wild marbles is nice when they actually show up in the dispenser. However, games donâ€™t typically last long enough for there to be too many of them in the mix. Iâ€™ve actually started playing with the optional rule of adding more reward tokens, just to lengthen the game as it gives a better sense of satisfaction and arc. Although the professors do give you other things to consider when pulling from the dispenser, the ease of combo-ing your turns detracts from the original joy of the game â€“ puzzling out how to optimally pull those ingredients. With the base game being so great, The Fifth Ingredient was somewhat of a letdown. This doesnâ€™t mean itâ€™s bad. It just means that The Fifth Ingredient is more like a class you donâ€™t have to go to all the time.