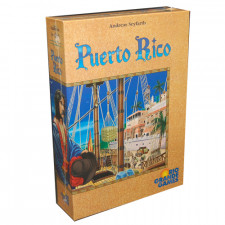 BC: Puerto Rico is one of those modern classics that most gamers appear to consider above criticism. While I can definitely appreciate its strengths, not to mention its contribution to later, much better games (Race for the Galaxy comes to mind), I personally have never been as turned off by a game as the few times Iâ€™ve tried to play it. To present my complaints in brief, the strategy is repetitive and dull while obscure enough to alienate newcomers. Victory--heck, even staying afloat, as punishing as the game can be when you misread the timing--is less a measure of skill and adaptability than of familiarity with the elaborate dance of roles for which the game is famous.

DG: Above criticism? No. But the game is strongly designed, eliminates downtime, and is spectacularly interactive. In a hobby where â€œmultiplayerâ€ solitaire is often thrown around, Puerto Rico has perhaps the strongest give-and-take element without any direct attacks or â€œtake thatâ€ cards. While perhaps somewhat opaque to newcomers, it is hardly alone in that category. And the more that you play, the more your strategy is defined by what your opponents are doing - and what jobs they are likely to take - as it is by your own strategy. Itâ€™s a beautiful system of getting other players to do the work for you.

BC: Iâ€™ll throw your words right back at you. Sure, it minimizes downtime and has high interactivity, but itâ€™s hardly alone in that. Iâ€™m not sure it really eliminates downtime--you are still taking turns, and you may have to wait a long time for the person before you to decide which buildings to purchase, for example. In fact, because the actions are so clearly regimented--you wonâ€™t be earning money or harvesting goods unless everybody else is--the game is considerably more prone to analysis paralysis than many Euros, as you must consider the remaining jobs, the other playersâ€™ tableaux, and your overall and short-term strategy each time you take an action. If you get out of sync with the other players, there is no emergency parachute to get you back in the game until the jobs refresh at the end of the round. Iâ€™d be much happier with a game like Caylus, where you can make a subprime move but recover fairly quickly. And it arguably has less downtime than PR.

As for interactivity, the fact that you can end up with several wasted turns if you get caught unprepared makes this feel a lot more mean-spirited than most Euros. Even Troyes, which lets you steal other playersâ€™ dice from under them, gives you less of an opportunity of absolutely devastating your competition.

DG: Are you sure you were playing Puerto Rico? The game sees very little analysis paralysis, partly because of the micro-turns and partly because your choices must be considered in light of what the other players are likely to do. In fact, planning your strategy around what others are likely to do, and taking actions when opponents are less able to benefit from them, is an intriguing challenge. Knowing that whatever I take will benefit everyone else puts me in a bind where Iâ€™m looking for relative advantages - not necessarily absolute ones. Also, I donâ€™t think the lack of an â€œemergency parachuteâ€ is a negative. Puerto Rico emphasizes longer term strategy rather than turn to turn tactics. So much of the game would be lost if the choices you made one turn before had no lasting impact on what followed. Finally, Iâ€™m not sure Iâ€™ve ever had wasted turns in Puerto Rico - even when I was new to the game (and I admit that the first play can be unfriendly to newcomers). Even if someone else picks the job I wanted (say, Produce), Iâ€™ll still get to do it (by producing goods that round).

BC: Everything you just described--you have to consider not just you, but what others are going to do, leaving you searching for relative advantages--is exactly what causes AP. But that is a player issue, of course, not a game issue, so I won't dwell on it. The typical wasted turns happen when somebody picks the Builder and you are one or two coins short of the building you wanted. So you can get a subpar building, knowing your space is limited and it will set you back in funds again, or you can skip the purchase. Then somebody picks the Mayor, because all the other players just got a new building, and you are the only one who doesn't have anywhere to put the new â€œcolonist.â€ Thatâ€™s two wasted turns. You can also be blocked out of shipping and trade pretty easily, thanks to the rules that you must ship the same type of good or sell a different type, respectively. And if you don't get to sell/ship any of your goods, you are screwed during storage, when you have to discard all those extra barrels. Now there are buildings/quarries available to mitigate all of those things, but it is still unnecessarily punishing, in my opinion.

And after a few games, you are basically going picking the same roles in the same order every round, with the privilege going to whoever happens to be the active player when itâ€™s time to play that role. The strategy seems deep because it is so punishing when you screw up, but it ends up being the same thing every game, especially because there is no variety in the setup, except the order of plantation tiles.

DG: Well, if you are a few coins below participating and not making use of the colonists, then thatâ€™s just poor play. Or, maybe itâ€™s that your opponents realized they could build a building or ship goods and you wouldnâ€™t be able to join in. Thatâ€™s good play on their part. Itâ€™s a strength of the design that good (or bad) play has significant consequences. If I could play poorly and still compete strongly, then it isnâ€™t so much a game as an activity in feel-goodery.

While I donâ€™t think a randomized setup is necessary to give the game replay value, I think one of the legitimate criticisms of Puerto Rico is that the early game can feel a little scripted. And, it can be easy for players to fall into familiar strategies rather than branch out into untested paths. This is especially true at higher levels of play where longtime aficionados can tell the â€œoptimalâ€ job selection at any given point. But as the game wears on, new opportunities are presented and a real market is created. If one player is the sole source of a good (like Tobacco or Coffee), then they can really abuse that for big points or income. Itâ€™s up to the other players to upend them and break their market open. Puerto Rico is as much about playing against the other players as it is about playing for yourself.

BC: I still feel that--like the slave labor the game famously candy-coats--Puerto Rico has seen its day in the sun and deserves to vanish into obscurity. Granted, I am not a big fan of high-confrontation games, but to me, if â€œpunishing bad playâ€ means shafting a player with literally no options during one or more successive turns, thatâ€™s just bad game design. The role-call idea was a great innovation, but itâ€™s used to much better effect in nearly every other game it appears in, even San Juan. I like games that allow me to make new decisions and realizations with every play, not shackle me to routine.