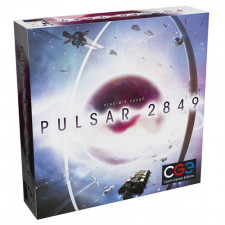 Mankind has developed jump gates that allow for interstellar travel. More than that, though, there is now the technology to harness the power emitted by pulsars. The players control enterprising individuals looking to claim and develop pulsars while also patenting new technologies and striving to complete particular goals.

Pulsar is dice-driven. Each round, a number of dice are rolled and placed on a board. Then, in turn order, players each select one die. A second die is selected in reverse turn order. Although many actions require higher dice, those large numbers arenâ€™t necessarily better than low ones. In fact, nearly all actions require a specific die â€“ a higher die is not acceptable. So players will often compete for particular values, rather than simply grab higher dice.

Once everyone has their two dice, itâ€™s time to use them. They can be used to fly your ship, claiming pulsars or exploring new planets. Once youâ€™ve staked your claim on a pulsar, you can use your dice to construct or complete gyrodynes, the technology that turns pulsars into energy (i.e. points). You can also develop transmission arrays which are a side objective. Completing a section typically provides a one-time point bonus as well as ongoing income in resources or points. Finally, you can also patent new technologies. These tend to be either one-time bonuses or provide ongoing abilities making other actions easier or more effective.

On top of all that, Pulsar uses randomized goals and patents. The patents come from three boards, but you have six double-sided boards to choose from. So those can be dramatically different from game to game. Similarly, each play will feature three goals chosen from six double-sided tiles. They will offer points for particular accomplishments â€“ like constructing gyrodynes or building a sufficiently large transmission array. This helps to drive players toward particular achievements and fosters strong competition. 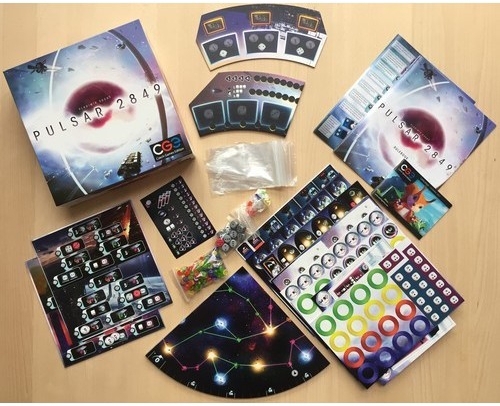 At first glance, Pulsar might seem a little overwhelming. There are so many actions to take and only eight rounds to the game. Plus, you only get two dice per round! Luckily, there are a few ways to get bonus dice, but even then you get, at most, three total dice per round. Players have to avoid getting sidetracked by all the shiny opportunities and instead develop a strong focus on their particular strategy. Spreading yourself too thin is a recipe for a quick loss.

But Pulsar is careful not to lock you into one strategy. It uses randomized exploration bonuses to encourage you to stop at planets you might otherwise pass by. In fact, they sometimes allow you to act more efficiently by giving you other actions or providing die modifiers.

The patents tend to be quite interesting. They form up in eight rows and you get access to one additional row each round. In the early rounds, they tend to be items that make the other actions easier or get you points for taking them. Middle patents tend to provide scoring opportunities, provide bonus dice, or other unique abilities. And later patents are usually all about end game scoring.

But every action you take acquiring a patent is an action you arenâ€™t flying your ship or building your transmission array. This results in a strong tension between obtaining cool new abilities and actually using what youâ€™ve acquired to get points. 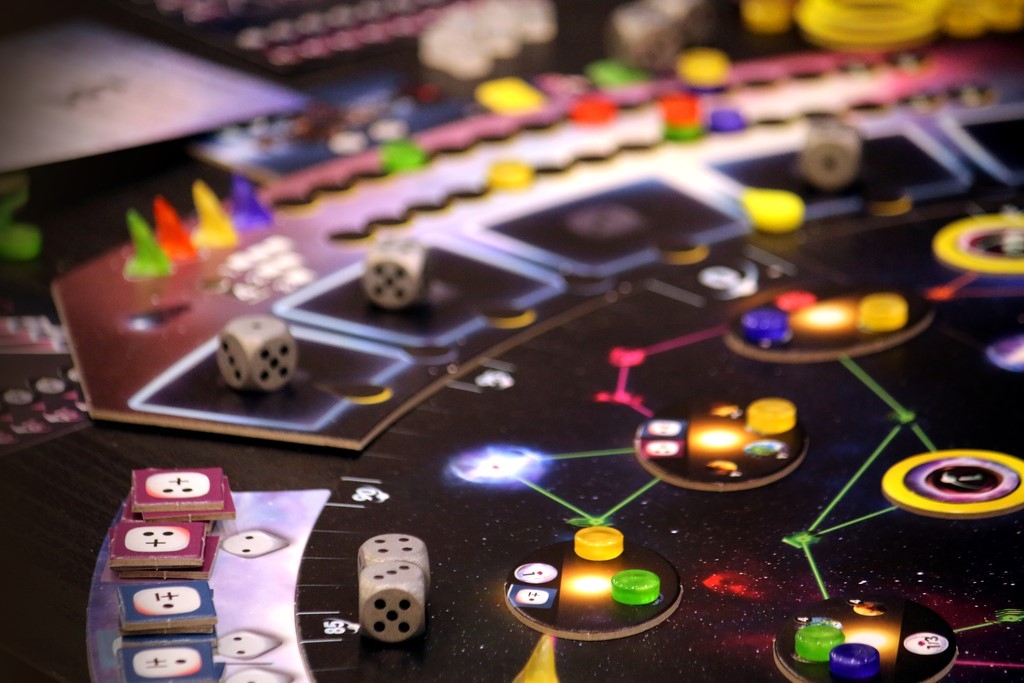 Drafting the dice is the most interactive part of the game. Sometimes a new patent just became available and you want to prevent other players from accessing it. But it also creates hard decisions for you as well. Even though higher dice arenâ€™t necessarily better, itâ€™s also true that the better patents and technology arrays typically need higher numbered dice. To counteract that, taking high dice moves you backward on the turn order track or the income track. Itâ€™s a wonderful system that balances your greed for the high numbers with your need to keep options open. And when a particular number is scarce, it forces you to eye your opponents and guess at their intended selection.

The only real negative for Pulsar is that youâ€™ll need some significant table space. The board isnâ€™t small and it is only enlarged by the numerous side boards that surround it. Plus, youâ€™ll need room for player boards and a spot to safely roll the dice. But these are minor complaints in an overall stellar performance.

Pulsar 2849 has a lot to enjoy â€“ especially for those fond of euro games or space exploration. It hits the right notes on interactivity and forces players to make numerous hard choices that lead to wonderfully divergent strategies.