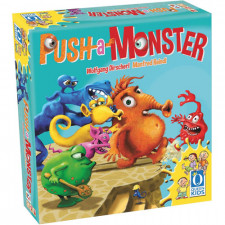 I totally understand why someone would not like to play games with kids. It takes a lot of understanding and focus on the part of the adults to put up with child-like impulses, and not everyone is up for that. But it can also be a rewarding way to game, because kids take you out of your comfort zone. Kids see things different from adults, and they look for different things in games. That means that you end up playing different sorts of games than you would otherwise, which is where I find myself with Push A Monster, a fun piece of fluff from Queen Games. It’s designed to be a game for kids, and it fills that space admirably. 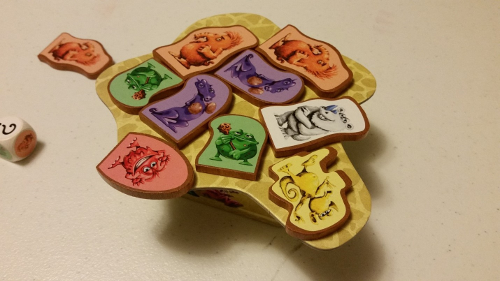 A new kind of platformer.

The main board is a raised platform that holds a bunch of wooden monster-shaped tokens in varying colors. On a player’s turn they roll a die, which tells them to add another monster of a specific color. This is done through the use of a little cardboard plank that holds the monster, and another to push it onto the platform. Any monsters that fall off as a result will be good for other players. That’s because falling monsters give a matching token to another player. Those tokens are all different sizes, so that when they are all lined up end to end the players will be able to see who got the most “points,” even though there are no numbers involved.

Obviously any game with a dexterity element will live and die on its components. Push A Monster does pretty well in this regard, especially considering the low cost of the game. Very young children might have some trouble with the mild precision required to slide a monster on to the platform, since the linen-finished cardboard can be a bit slick on the wooden pieces. There’s also the pedestal that holds the platform. There’s a little squiggle of glue there to give a bit of traction for the platform, and as a low-rent solution it actually works quite well, allowing the platform to rotate if necessary but staying in place when adding a new monster. The artwork itself is alright, if a little misshapen. I do like the monsters though, which all have a touch of personality that my kids liked. 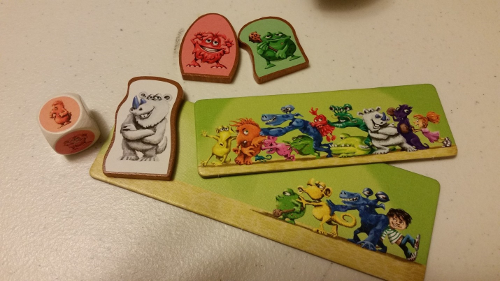 Overall in terms of physicality I’m actually really impressed at how well this works for young kids. The challenge of pushing a new monster on to the platform is low enough for kids to be competitive, but high enough for adults to play a pretty close game. That’s a tough balance, but Push A Monster pulls it off. Of course there aren’t a lot of moving parts here, tactically speaking, but there’s just enough to give players a decision or two to make, which is just about right.

There is one piece of design work that I think helps this game a lot: the scoring. What impresses me most is that it doesn’t look like scoring at all. Instead the game expresses point value in terms of the sizes of the tokens players gain when opponents knock monsters off the platform. Putting them all end-to-end is an intuitive way for kids to figure out the winner. While any arithmetic involved would be easy enough to understand, this way makes it easy for somewhat older kids (around six or seven years old) to play with younger ones (three to four). It’s also pretty reflective of who should win the game, rather than a sort of arbitrary measurement that gives any old person the win. 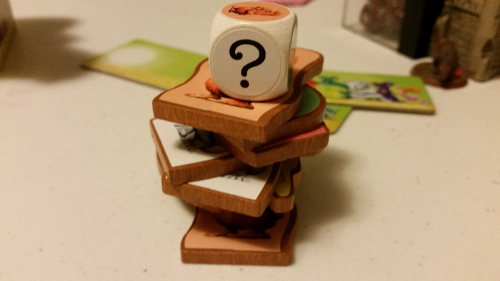 The real question though is whether kids enjoy the game. I’ve only had the opportunity to play with my own children, and their response could best be characterized as muted positivity. They clearly have fun playing the game, but in our house this game is competing both with better games, and with licenses like Star Wars. By that standard Push A Monster is a bit of a hard sell, although when they agree to a game they consistently enjoy themselves.

As for how it works for adults, it’s not much more than a mild amusement. The best games of this type are fun even when the kids aren’t around, and while some might want to enjoy Push A Monster at the local game night, it’s not going to replace the likes to Loopin’ Louie or Rhino Hero, both of which have more visual flare. But any adult fans a children’s game might gain are probably secondary. Push A Monster is a good time for kids and will be accessible for a pretty good spread of ages including any parents who might be roped into playing.