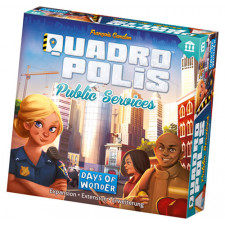 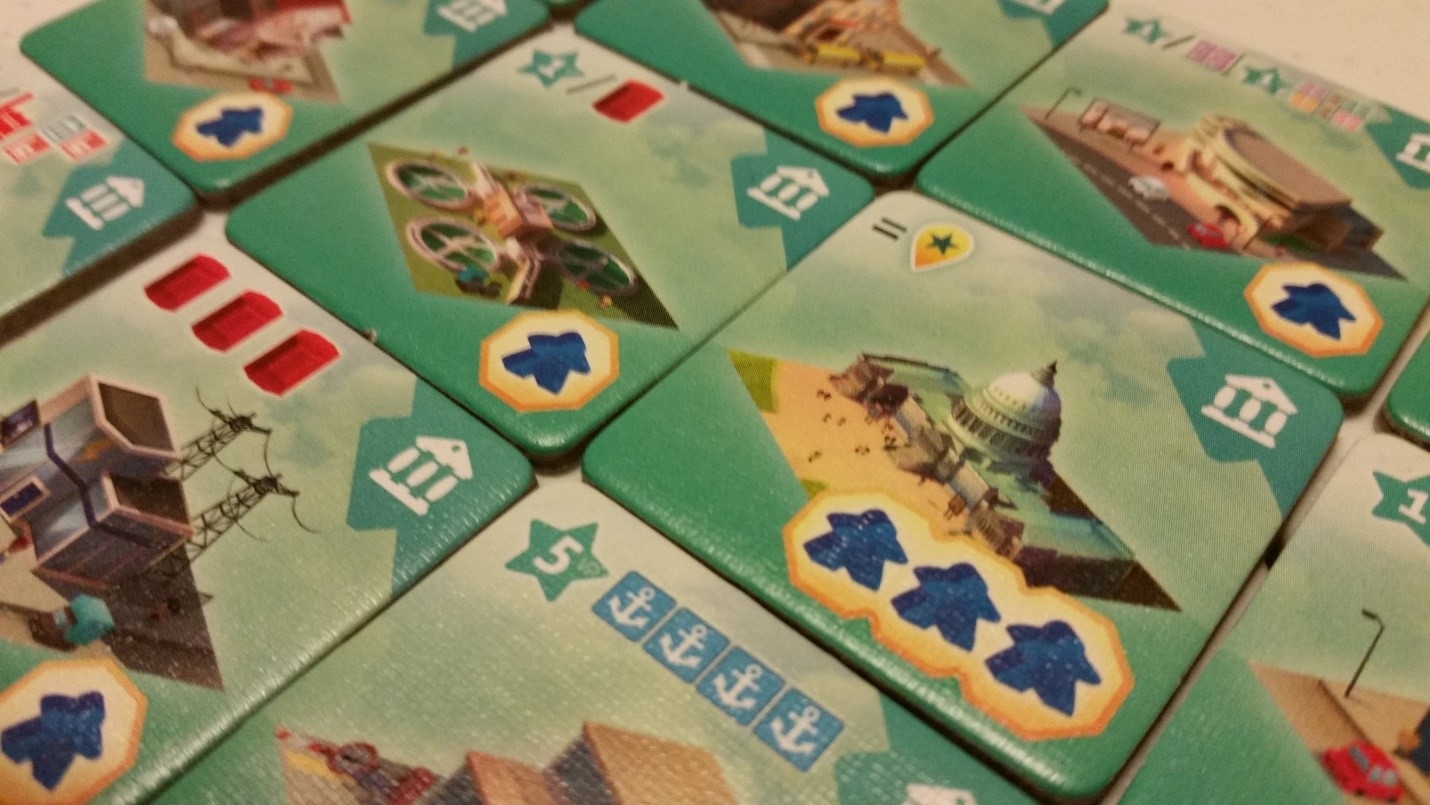 Expert city planners only for these tiles.

Truth be told, my enjoyment of Quadropolis has not really grown since the game came out in 2016. In my original review I found it to be an enjoyable German-style game with a couple of fun flourishes, and I stand by that. But it has never really advanced beyond that status, at least not when compared to other Days of Wonder releases like Five Tribes. It is still a fine game, doggedly reliable in what it gives, but unable to ever transcend the level of “pretty good.” But it did strike a chord among other players, and it’s not hard to see why. It is approachable and attractive, and others have found more enjoyment in its small pleasures than have I. It is for these people that the small expansion, Public Services, will be most attractive.

Public Services is indeed a small expansion, providing only new tiles that replace the public services tiles from the original game. You may recall that these tiles provided points based on how many of the different sectors of the board had one. They might provide a few bonus VP, but they didn’t change the actual shape of the game much. These new buildings have a more pronounced effect though. When a public services building is selected from the grid, it can now be changed out for one of the new buildings, a few of which are turned up every round. These new building all provide VP in new ways, perhaps by allowing players to allocate resources in a new way to that building, or by providing VP based on surrounding buildings.

These new buildings have a few little thematic flourishes, like a maternity ward that gives a sudden boost in population or a reprocessing plant that can consume energy for VPs at game end. While these touches are indeed welcome they don’t amount to anything very complicated in terms of gameplay, and a lot of them are less overt in their thematic expression. For example, I don’t know precisely why the TV Station provides extra population based on the number of shops in your city. Maybe all of the stores have a nice cable package.

Quadropolis still holds the distinction of having one of the best limited versions of a game there is. It could be played in either Classic or Expert mode, and while the Expert version was a little more interesting the Classic version was no slouch either. Public Services shows a consequence of this design decision however: every expansion will have to provide content for what is essentially two games. This is already a very small expansion, a mere 24 tiles. But you will only ever use about half of those tiles in any given game, since 11 of the 24 are essentially nerfed versions for the easier Classic game. I can see why they did this, and I don’t mind much, but it does make what is already a very small expansion seem even smaller. 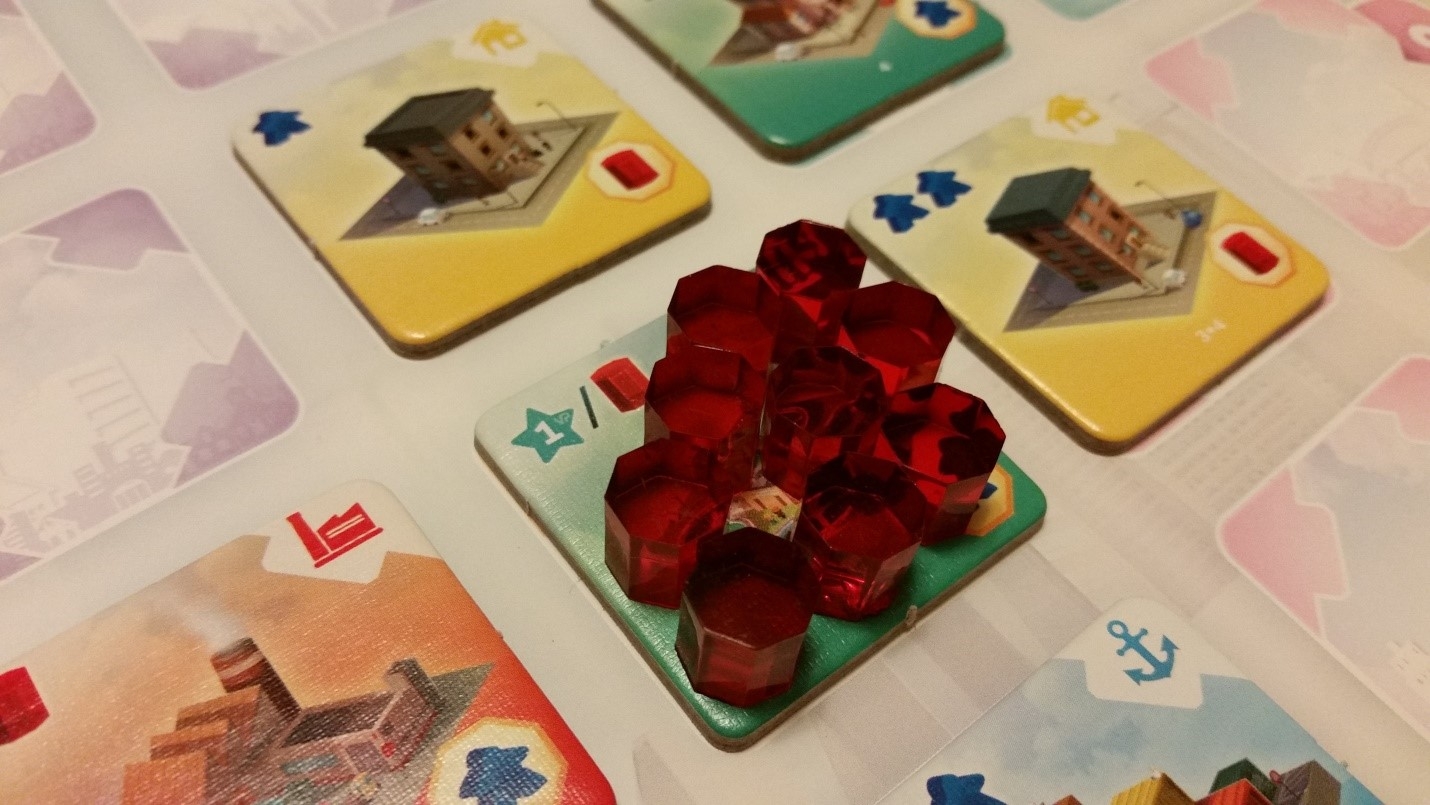 One point per barrel, huh? What to do, what to do…

I do appreciate how the new buildings can change the tenor of the whole game, and sometimes in some extreme ways. The afore-mentioned Reprocessing Plant gives extra VP for energy that is placed on it, and there is no limit to how many times you can do this. I suspect some gamers will balk at this, as it seems like something that would be easy to exploit. I don’t think it’s much of a problem overall, because those energy tokens are unable to be placed elsewhere, and because the action cost for anything in this game is pretty extreme. But it does change the way you play, and that can sometimes be annoying. It’s the sort of thing that passes for “interaction” in some games, where you need to make decisions accounting for the new factor without actually being able to impact that factor directly.

But for the most part, this is a pretty low-impact expansion. That will probably work for those who found the original to be highly rewarding as is. It does continue the attractive graphics of the original, and it integrates with a minimum of overhead. But for me Quadropolis has come to occupy an uneasy space where it’s a little too laid-back to really have any teeth, but isn’t quite laid-back enough to feel that loose. I would have preferred an expansion that made it either fish or fowl, perhaps by distinguishing the two versions of the game a little further. There’s no reason to not use it, but Public Works doesn’t do a lot to alter the alchemy of Quadropolis.