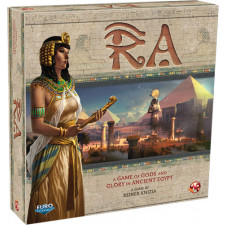 Letâ€™s just knock this out right up front. Wind Rider (an offshoot of Asmodee and Fantasy Flight Games) have tremendously overpriced their new edition of Reiner Kniziaâ€™s classic Ra. Donâ€™t get me wrong â€“ this is a lovely edition of one of the most important (and timeless) games of the 1990s, with a hieroglyphic-embossed board, a resin Ra figure and illustrations on par with their previous issues of Tigris & Euphrates and Samurai. But barring the aftermarket when it has been between printings, this game has never retailed in the $60 range. I think the game is totally worth twice that price, but compared to other $60 games on the market it feels a little paltry. Whatâ€™s more, since this is a reprint of a classic game and not a current design, I would have liked to have seen it priced to attract folks in to try one of the best auction games ever created. $40 retail would have been right on the money.

But Iâ€™m a games critic, not a pricing manager so letâ€™s get back into my pay grade. Ra is part of Dr. Kniziaâ€™s rightly venerated â€œauction trilogyâ€ that includes the seminal Modern Art and Medici. All three games using the auction as the primary vehicle for interaction and competition, and all three approach the concept from completely different angles. Between the three games, you can draw subtle connections but each stands on its own as an extremely refined design. Of the trilogy, I find that Modern Art is the most thematic, Medici is the most fun and Ra is the most compelling.

Beginning with three bidding sun disks, each with a unique value, players must bid on lots of tiles to construct an abstract but tangible Egyptian kingdom. It is effectively a set collection game, but with some surprising twists that not only provide for interesting gameplay, but also develop essential themes. Once again, this is a game that many will argue has no theme when in fact Dr. Knizia again demonstrates how his handle on themes (not just settings or illustrations) is singular among game designers. 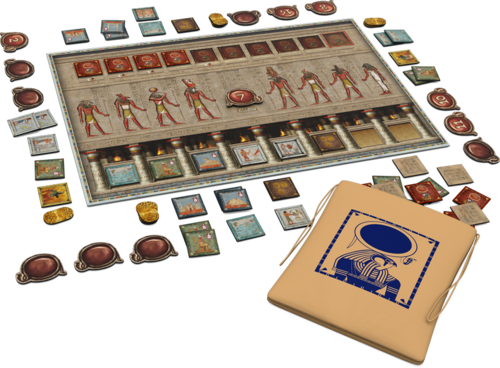 There are three Epochs (rounds) in the game, and during each turn you will draw a tile and put it on the rack for auction. Or, you might draw a Ra tile which triggers a once-around bid or pass auction. At the end of your draw, you may choose to invoke Ra, which triggers an auction with a slight rule difference- if no one bids, you must bid on the lot. One of the neat things about this process is that you not only win the tiles displayed, you also win whatever the last sun disk was that was used to win an auction. This becomes your currency for the next round. So these sun disks, especially the high value ones, can dramatically impact the value of a lot.

As for the tiles youâ€™ll be buying, there are several different types that each has different scoring schemes. Whoever has the most Pharaohs at the end of an Epoch gets five points. There are gold tiles worth a flat three points. There are Nile river tiles, but they only produce value if you have also collected at least one Flood tile for that epoch. If you donâ€™t manage to get any civilization tiles, you actually lose points but the more variety of them you have, the more they are worth. And then there are god tiles, which allow you a rule-breaking option to snatch a tile from the rack but give you two points if you donâ€™t use them. And then there are eight types of Monuments that score based both on how many of the same ones you have as well as for how many different ones you have. One of my favorite thematic bits of the game is how at the end of each Epoch, everything washes away except for the Monuments, which last for the entire game. Thatâ€™s a wonderfully subtle comment about what remains and what is forgotten.

There is another twist to the tile-collecting and bidding. Disaster tiles are in the mix and each impact a different type of tile. What happens is that you wind up with a fat lot on the board with lots of high-scoring potential...and a disaster or two that will discard two of the corresponding tiles from your collection. This is another fascinating way that the game generates a fluid, completely conditional valuation. It also creates situations where you must weigh the net value of a lot against the damage it will do to you.

Itâ€™s classic Knizia design. Make the player sweat out a decision by giving them multiple options but limited choice. Make the player choose their battles. Make the player accept negative consequences in hopes of a positive outcome. And it is all tied up in this evocative, thematic game that manages to capture the ebb and flow of epochal history not unlike Tigris & Euphrates. Sure, it can feel a touch analytical and mathematical as players weigh out +1 or +2 point gains. But the process is so clean and the structure is so minimal that it never feels burdensome or cold. Itâ€™s simple enough to teach to anyone, but the richness of the scoring system imbues it with unusual depth and that unique addictive quality that characterized the very best of the German games of the 1990s. This is one of those games where every time I play it I feel like I am rediscovering a treasure, gilt with gold and honored by the passing of time.