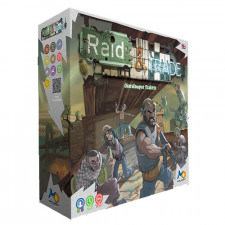 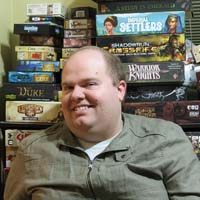 There's a moment in Raid & Trade — usually during the rules explanation, so before the game even properly starts — that communicates exactly how wonky it is. You'll be sitting there, either hearing or telling how everything works, and it hits you: this game makes no sense. And not just because it's set after World War 3 and the One Percent have apparently settled on a version of the Marshall Plan that included building a city of pure gold. Rather, it's because this is the sort of game that makes you spend hunks of action points at a time, but without any common sense to your options. Searching a house gobbles up maybe eight action points at a time. Attacking somebody to steal their hard-earned salvage costs seven. Inventing a generator out of a pair of pliers, an extension cord, and a rusted length of pipe requires one. As in, a single action point.

But Raid & Trade's contempt for common sense isn't limited to the fact that everyone is Mr. Magoo while rummaging through cabinets but Wesley Crusher when it comes to pulling technological solutions out of thin air. Take combat, for example. Since the goal is to gain admittance to the Golden City by impressing its residents, and since any of the three ways of doing so require distressing gobs of resources, you may be tempted to steal all the socks, spark plugs, and chocolate bars hoarded by one of your fellow scavengers. So you follow them around, get close enough to smell their post-apocalyptic undershorts, wait until they can't escape, and bang, you attack. Roll some dice, listen to some griping about how uninterestingly random this game is, and you may now be a few pounds of trash richer.

Sounds reasonable, right? Well, let's say you want to trade instead. Your buddy has the bits you need to assemble a transceiver while you're holding the junk they need for their solar panel project. Sounds like a match made in Ninth Heaven, the seedy wasteland bar where people swap things. From the previous example, you might think that the two of you would have to arrange a meet. Maybe you'd have to broadcast your location to everyone at the table, giving them a chance to attack the both of you at once. This is a world where it costs action points to move across tiles, search buildings, build wondrous inventions out of rust and bits of drywall, or pull odd jobs. It would make some sense that some degree of effort would go into making these trades. Wouldn't it?

Nope. You just announce the trade and make it. Just like that.

Sure, you might theoretically reach a point where nobody will trade with you, but I guarantee that after two and a half hours everyone will be so desperate to go to bed that there will no longer be any profit in holding a grudge against whichever of your buddies is in first. To recap, it takes a bunch of preparation, risk, and proximity to attack someone. Trade requires both parties just be too bored to argue, which is nearly all the time. There's even an outpost on the board where players can go to recuperate and do menial labor in exchange for peanuts. But can you trade there, perhaps transforming it into a hub of scavenger commerce? Nope, only one person is allowed in at a time. If it starts out on the periphery, don't count on anybody bothering with it.

For the sake of dragging this out, let's pretend that someone gets more invested in Raid & Trade. They're willing to ignore its warts, hand-wave its eccentricities. As connoisseurs of cardboard, every one of us is accustomed to the occasional odd rule. After all, maybe the turn-by-turn gameplay is exciting?

Well, no. Not even a little. You need resources, so you go to a house that hasn't been claimed yet. Easy houses require fewer action points to "raid" than tougher ones. Once you've checked your remaining action points to make sure your character isn't too pooped out from rambling down the street and making tele-trades, you flip the tile and resolve it. And I can assure you, these are the dullest possible event tiles since the Ancient Egyptians decided against ever making another event-resolution game and went back to building big triangles for their entertainment instead. Here, there are two varieties of tiles to resolve. The first makes you roll a die — a die that can't be modified in any way for fear of letting the player extract some glimmer of fun from this game — and then you get some resources or maybe some bonus resources, also at random from a bag. The second lets you make a decision, but the decision is always "lose some reputation with the Golden City weirdos to cart off wheelbarrows of resources, or don't."

Look, I'm a big believer in three things: the Holy Toblerone, that the scent of an old book just might end all wars, and being fair in my reviews. The problem is, Raid & Trade is straight-up the most boring game I've played in years. It looks nice, and the idea certainly isn't shabby, and there are some ideas here that might have worked if they'd been slotted into a system that didn't give me a preemptive fever as an excuse to stay home. Unfortunately, Raid & Trade doesn't deliver on anything but the fact that it's big and colorful. And you know what else meets that criteria? Something gross I won't tell you about because it proves my point way too well.