Raiders of the North Sea is an unassuming game in a smaller-than-normal box. It doesnâ€™t promise you grand adventures or epic battles. There are no conquests or glorious tales. Instead, multi-use cards and resource collection are bundled together in one of the smoothest designs Iâ€™ve seen in recent years. Turns are quick thanks to the novel, and highly underrated, place-and-pick-up worker mechanic. The game is smart, but modest, making the release of two expansions at once quite a surprisingly gutsy move. Each expansion comes with its own hook, complemented by crew cards that interact with new mechanics.

Hall of Heroes introduces Vikingsâ€™ favorite travel companion: mead! Though the prospect of winning by having the best Scandinavian party boat is exciting, mead is actually used for a different purpose. Before rolling the dice during a raid, you can spend some liquid courage to bolster your crewâ€™s strength. The option to hedge your bets in the upcoming brawl is useful when you need a little extra muscle. However, given the crew size requirements on most areas, mead will rarely be the determinant between winning and losing altogether. Mostly, itâ€™ll help when you know youâ€™re shy of the higher points reward rather than compensating for a small and/or wussy crew. As such, you get more out of those cute orange mug-shaped tokens with boozehounds in your crew that use mead for other purposes. 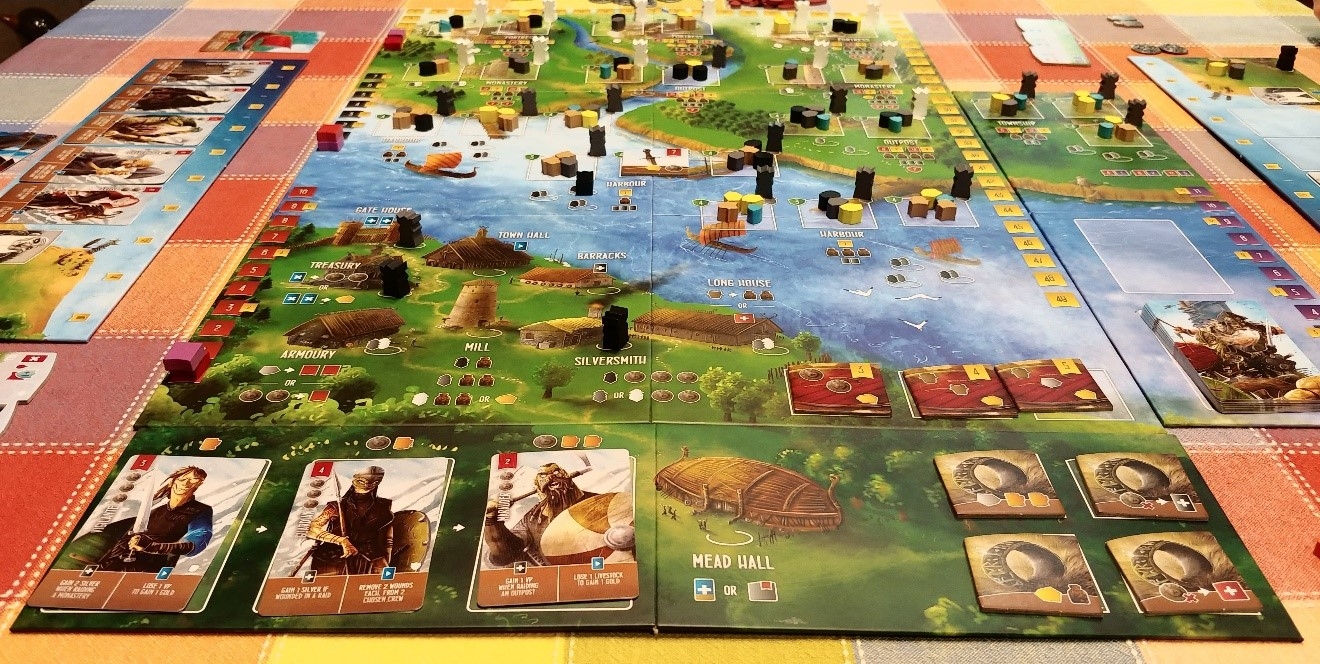 Not pictured: the rest of my table because the expansions ate it up.

Speaking of crew, Raiders of the North Sea is all about that Viking variety. Thanks to the mead hall board, you now get to choose one of the three face-up townsfolk to add to your hand. Being able to handpick what you need not only helps creating excellent crew combos, but also in selecting the right one-time effect. Because cards were harder to come by in the base game, using townsfolk for their discard effect sometimes felt like a waste compared to their permanent ability. Coupled with the mead and silver these cards come with when you select them, youâ€™re encouraged to turn over crew members way more now without it feeling like such a loss. In fact, you want to draw cards even when you have a full ship so you can complete quests. 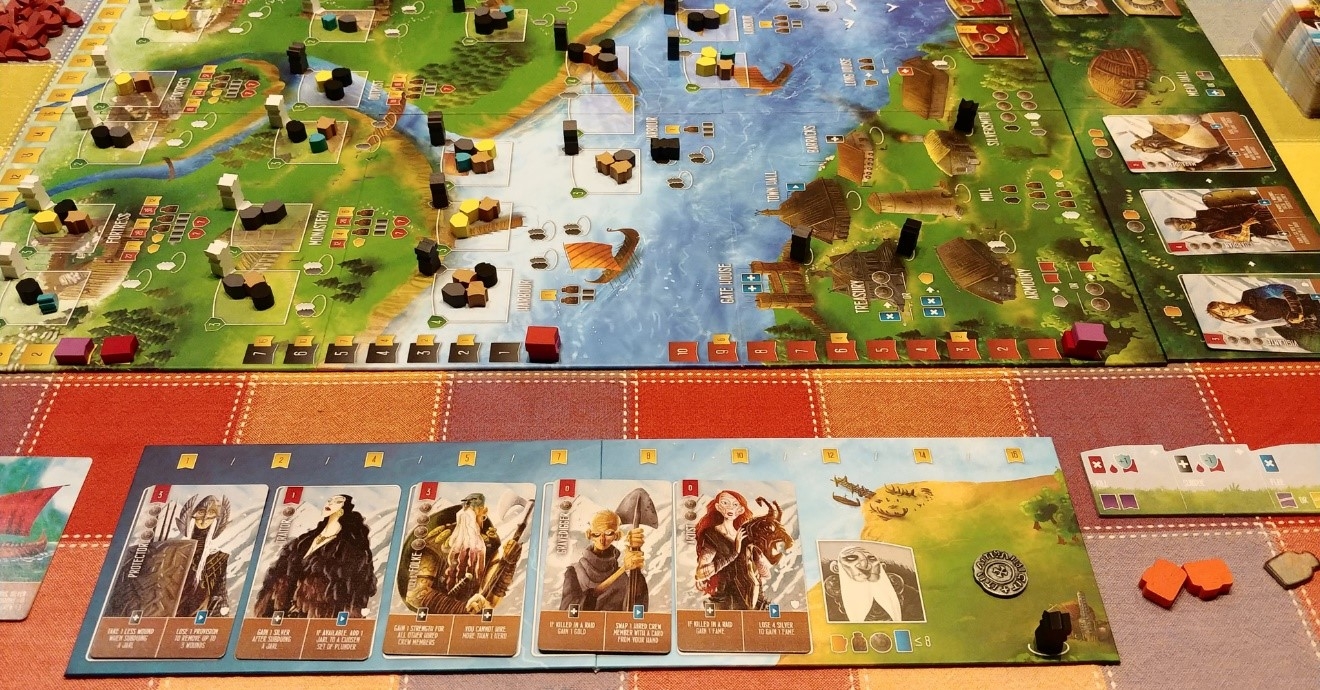 The new player board with dedicated crew space, in all its glory.

Once an area has been raided, quests pop up to fill the empty space. With promises of precious plunder, you can dump crew members with strength equal to or greater than the value on the quest. After receiving your reward, you place the quest tile atop your fancy new player board, netting you endgame points to boot. As if thatâ€™s not enough, collecting three of a kind will gain you a bonus action from one of the four reputation tiles. Having this outlet for cards is undoubtedly fun, but it would be more welcomed if it didnâ€™t prolong the game. Turns that would normally be spent moving toward clearing out the monasteries, outposts, and fortresses are now spent hoarding townsfolk. If quests progressed the game in the same way raiding did, Hall of Heroes wouldâ€™ve been an automatic must-include.

In case you ever felt like something was missing in your raiding life, Fields of Fame is here to remedy that with a whole new deck of beefy enemy jarls. These bad boys (and girls) are a wildcard you must deal with when raiding an area with a jarl token. Choosing to kill, subdue, or flee from the jarl is up to you and each option comes with a cost. Killing a jarl requires you to take wounds, which reduce your crew membersâ€™ strength, but give you an enticing reward. If youâ€™re not into the pain, you could subdue a jarl instead, which causes fewer wounds, but you have to pay off the muscly piper so theyâ€™ll join your crew. As part of your crew, the 5- or 6-strength jarls are boons in a fight; plus, they provide endgame points for whatever the jarl is into (e.g., wounds, armor, provisions, etc.). Or, you can just be a coward and flee. This leaves your crew unscathed, but your ego will bear the cost in fame â€“ a new track that contributes to your final score. 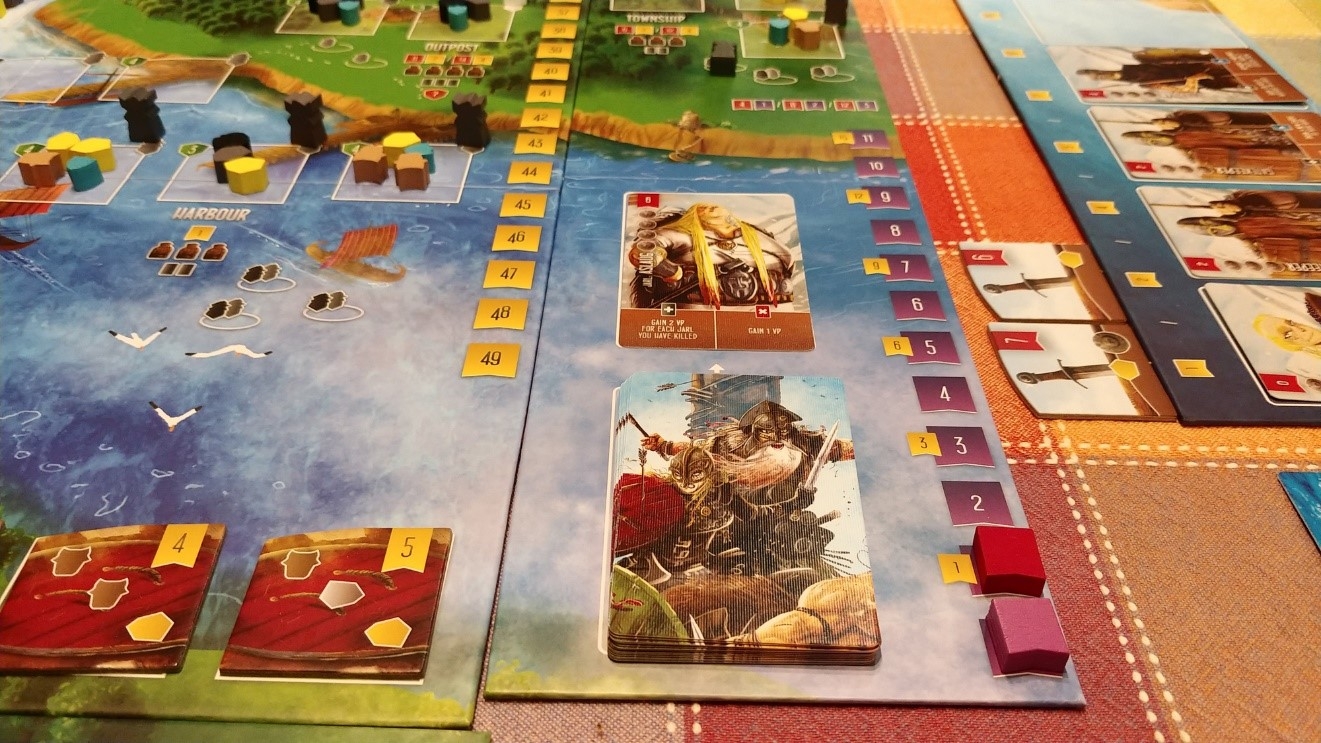 Free mead and money. What more do you need in a friend?

Though jarls are risky, itâ€™s difficult to resist their allure. Killing and subduing each have their own benefits, but being prepared when you raid area with a jarl requires much more forethought than before. Gone are the days of skirting defeat with lucky rolls. Wounds also mean that youâ€™re going to cycle through your crew much faster than before, often sacrificing the guy who is bleeding the most when resolving those Valkyrie tokens. Planning these neat little meat shield combos is pretty satisfying and gives you more to think about when choosing which location to raid.

Tis but a scratch.

Despite the jarls and addition of a few more raiding spots on the township side board, Fields of Fame feels closer to the original gameplay experience than Hall of Heroes. There may only be a handful of jarl encounters in the whole game, making the rest of the action feel familiar. Jarls do interrupt the flow of the game a little as you have to decide how to handle the encounter, but they donâ€™t slow things down as much as Hall of Heroes does. The fame track also gives you a reason to overkill in raids. Depending on how much strength you exceed a raid by, you can move up the fame track. This is especially nice when you are playing with Hall of Heroes and have mead for that extra push.

Without a doubt, both expansions integrate with the base game, and each other, seamlessly. The expansions make the infrequent or less exciting parts from the base game (e.g., crew turnover, excess military strength) more worthwhile. However, I canâ€™t escape the nagging issue of game length and bloat. The extra time the expansions tack on, especially once you start hitting 5 or 6 players, undermines the gameâ€™s strength of being so snappy. The wider array of options is interesting while also feeling bulky. To its credit, the gameâ€™s tight balance isnâ€™t thrown out of whack with the new mechanics or additional options for your turn. In fact, sometimes the balance feels overly tuned, with most scores evening out across the tracks. Even still, with each expansion having its own thing going for it, Iâ€™m hard-pressed to pick which of the two I prefer. No matter which you choose, Raiders of the North Sea will continue to deliver a consistently pleasant experience.