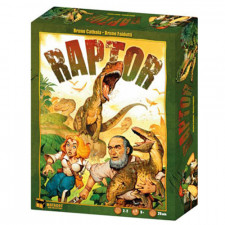 "Clever Girl.â€ That iconic line from the classic Jurassic Park is etched into my brain for eternity. A vicious hunter, the Raptor can cut through a manâ€™s flesh in moments and start devouring his body long before rigor mortis sets in. So when you run across a momma Raptor protecting a small pack of babies whatâ€™s your first instinct? Capture the little flesh rippers of course.

Raptor is an asymmetrical two player game that has one player taking on the role of a mother Raptor trying protecting a group of babies. The opponent takes on the aggressive scientists laying waste with flame throwers and tranquilizers in the name of science. To win the game the Raptor player must get three runts off the ends of the oblong shaped board while the Scientists must capture three infants or completely tranquilize the mother.

This is a fast playing 20 minute game with a surprising amount of depth care of the two Brunos - Faidutti and Cathala. Each side has a deck of nine unique cards numbered sequentially and each containing a special effect that may trigger. Players simultaneously select an action card from their hand of three and then reveal. Whoever played the lowest card receives the special ability listed while the other player receives action points to spend equal to the difference between the two numbers. So if you play a one and I play a nine, Iâ€™m cruising with eight action points and likely tearing your poor team limb from limb.

The effects on the cards are unique for each side and feature a whole suite of neat powers. As the Raptors you can frighten Scientists, effectively stunning them, you can remove the mother Raptor from the board to reappear anywhere, you can even summon a baby or two to the motherâ€™s tile which allows a large amount of unconventional movement. The Scientist excel at moving rapidly via jeeps, putting babies to sleep from range, and dousing the jungle in flame. They can also summon additional manpower onto the board while the Raptor side is limited to its starting allotment.

These special abilities tend to be very powerful but are focused and limiting. Action points allow you to move any or all of your sideâ€™s miniatures, attack the opponent, and get off the board. The tension here is that the balance in strength tends to tip towards the action point spectrum as the gap widens. Iâ€™d much rather have my unique ability than one or two movements, but if I can manage four plus then Iâ€™m singing in the jungle rain.

This inherent tension of trying to predict what your opponent will play and outwit them is the emphasis of the design. It produces difficult choices predicated on somewhat unknown information but slowly informs you as the game goes on. By restricting each player to a hand of three cards â€“ as opposed to giving them their entire deck from the onset â€“ adds chaos and fog of war. This randomness can be frustrating at times to certain gamers but I find it perfectly suitable to the short playtime.

Whatâ€™s particularly interesting is that the discard deck doesnâ€™t reshuffle until either your â€œoneâ€ value card is played or the deck runs out. That means if you play your nine and eight card early, I can make an informed decision on what range of numbers are the least risky for me to throw out. This strategy intertwined with the tension provides enough to chew on to keep the experience tasty without ever pushing the player towards a too fate driven decision.

The outcome of this tension-laced card system is a very interesting game of cat and mouse. While nothing on the table is obscured, the design boasts a similar feel to hidden movement games like Fury of Dracula and Specter Ops. You have that inherent intensity of having a baby raptor only a space or two away from an enemy and hoping beyond hope they canâ€™t lock you down and capture you. That card reveal can be wildly dramatic as youâ€™re making a break for it and trying to avoid the closing net. I find it immensely interesting that this game can capture that genre feel without committing to it wholly.

My only concerns with this beautiful game is a slight issue with the balance. It doesnâ€™t feel quite unfair, but the Scientist side is given much more leeway and is definitely more forgiving. The Raptor player needs to be on his sharp toes and cannot afford many mistakes in the early game. This hasnâ€™t undermined our enjoyment but it is something to be aware of as you will see more Scientist victories in your initial run throughs.

This is a gorgeous game with a modular board that changes slightly with each play. The small plastic miniatures and 3D cardboard boulders inject some life into the visuals and when paired with that tense central card system produces a really enjoyable filler with plenty of raw meat. This is a game that is very unique in both theme and mechanisms, hits on visual impact, and delivers in a short playtime. Bon appÃ©tit.