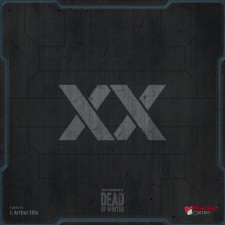 Itâ€™s too late. The disease is out and the infected are becoming the walking dead. But not everyone has succumbed and there is still hope to quarantine the healthy populace and save humanity. But not everyone wants your help. Some would rather take their chances in the wild than be locked up in your corporate prison.

In Raxxon, the players volunteer for the titular Raxxon Corporation. The evil company may have released this plague, but it is likely the best hope for researching a cure and itâ€™s the only readily available agency with the resources to save the uninfected. So it is up to you and your fellow volunteers to sequester the healthy and save mankind.

Each player gets a special role card that provides for a number of actions. While there is a lot of overlap, in general each role is especially adept at accomplishing one of the actions. At the start of a round, 9, 12, or 16 cards are laid in a grid to represent the crowd of people milling about Raxxon. All of them are face down.

At the start of a round, players usually begin by revealing a card or two. Some of them are healthy humans who are just looking to enter the quarantine. Thatâ€™s the best case scenario. Others are hostile humans. They are healthy and need to be saved, but as you reveal them, theyâ€™ll sabotage you. They might force you to reveal more cards or even end the round prematurely. 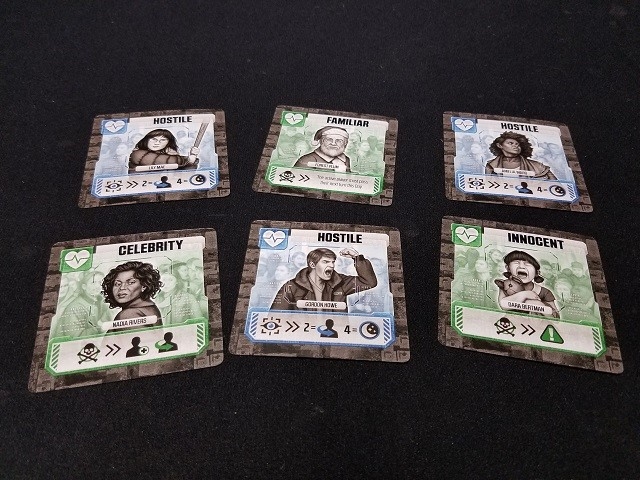 And then there are the infected. Some will require you to draw Raxxon cards, others will increase the number of infected in the general pile, and the worst kind will add new cards to the crowd. And, get enough of any one kind and theyâ€™ll end the round prematurely.

As you take actions, you mark them on your sheet. Each has a corresponding bad act. And, at the beginning of your turn, you have to do all of the bad things for all of the actions youâ€™ve taken. Itâ€™s not a big deal when youâ€™ve only done one or two actions, but by the end of the round, you may become a detriment to the team.

The game does a good job of incorporating the crossroads element from Dead of Winter. Several actions can make you draw a Raxxon card. Each has a trigger at the top. Like, â€œif there are 2 or more Hostile cards in the crowdâ€ or if a particular character is in play. If it doesnâ€™t trigger, you breathe a sigh of relief and move on. But if it does, it often presents you with two difficult decisions. Some may seem easier, but they increase Raxxonâ€™s power. Increase it too high, and you lose the game as the sinister company takes over.

Raxxon presents players with an interesting spatial puzzle. It isnâ€™t enough to just flip over cards and see whatâ€™s there. You have to maneuver them into the correct rows and columns in order to evacuate them to quarantine. You also have to decide when to destroy infected that have shown up in the crowd. Getting them out early can help avoid a premature end to the round and other negative consequences. But that also means using more actions and having more bad things accumulate each turn.

At the close of a round, more infected make their way into the deck of crowd cards. So, on each successive day, it becomes harder and harder to find the healthy people and save them. And this wonderfully ramps up the tension. Raxxon, like many of the best co-ops, gets more difficult as time goes by. This creates exciting endings where quite often you win by a whisker or lose by a hair.

Although it has many strong points, there are some weaknesses worth calling out. First, there is no inherent block to the â€œalpha gamer problemâ€ that afflicts many cooperative games. Of course, this may be more a problem of the group than the game. But where so many titles use elements to reduce or negate the issue, itâ€™s a shame none were included here. Additionally, Raxxon relies on a bit of a luck in terms of what cards come out and what gets revealed. If you strongly dislike the element of chance, this title might seem a bit too swing for you.

But, those potential negatives are minor in comparison to the enjoyment the game provides. Itâ€™s a great mix of puzzle-y strategy, cooperative planning, and zombie flavoring. The theme feels well integrated and the Raxxon deck which often offers players somewhat of a Hobsonâ€™s Choice is extremely well implemented. Overall, you can expect an enjoyable cooperative experience whenever this hits the table.