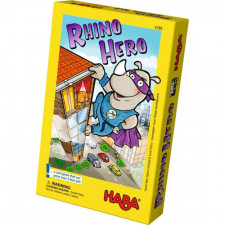 This holiday season, thereâ€™s no shortage of games that are being ogled by the heaving masses of shopaholic gamers, but sometimes we forget that there are quality games that are produced specifically for children but that are still fun for all ages. Of all the companies that epitomizes this belief, HABA, is at the top of the list of great childrenâ€™s game makers. This is the company that produced the award-winning Animal upon Animal, so they know how to make games that are fun for the entire family. Rhino Hero is no exception to their track record; it is a fantastic, smart, interesting and fun family game that I have no doubt you will enjoy.

Rhino Hero is in a strange sort of design space because it has some unique dexterity elements that are almost overshadowed by the strategy elements, which is a great treat for parents and a challenge for the kids; whipping parents at a game fair-and-square is only truly rewarding if it wasnâ€™t dumb luck, right? This game has some luck, via card distribution, but most of the game is pure skill and strategy. Suffice it so say that I was pleasantly surprised by how much I, and the rest of my family, really enjoy this inexpensive, well-designed little gem. Most interestingly, itâ€™s not my seven year old who likes it the most, although she enthusiastically rates it a â€œTENâ€, but rather my fourteen year old, who has asked for her own copy of the game for Christmas so that she can take it to her friendsâ€™ houses.

Iâ€™m not sure what part of the magical recipe makes this game so much fun, to be honest. I mean, it totally deserves to be well-loved based on the smart design work and very high quality components, but thereâ€™s an intriguing quality to the game that eludes my ability to pinpoint the exact reason it provides such an entertaining, addictive experience. The card stacking portion of the game is no less than merciless, as you will find yourself attempting to build card houses from the thick, scored cardstock which allows you to crease each card and bend it as much as 90 degrees without appreciable damage. Itâ€™s deceivingly difficult to keep the building from tumbling, when it becomes tall, because the cards are relatively light; dragging a â€œceilingâ€ a little too much will provide just the right friction to drag the whole tower down, so you have to place cards fairly gingerly in order to avoid that fate.

In addition to how hard it can be just to place walls and ceilings, some cards bear the icon of the gameâ€™s eponymous protagonist on their foil-gilded corners which, when played, forces the next player to place the medium-sized, wooden rhino meeple on that card, in a certain location. Not only are the locations usually hard to access, but they also are in a spot that, when the cards are aligned in just the right way, create a fulcrum point beneath that spot, causing it to be exceedingly difficult to place the meeple. Ironically, itâ€™s easier for smaller hands to get into the spots, so kids definitely have an advantage there which makes up for any advantage parents have with regard to strategy.

Speaking of strategy, more often than not the gameâ€™s end comes due to a smartly played hand instead of via a tower disaster. The end game occurs when a player plays their last card or topples the tower, and players generally play one card per turn. All you do on your turn is add walls shown on the topmost floor of the tower, and then play a ceiling card on top of the walls you placed. Since most cards have unique actions indicated by the aforementioned icons on the card corner, you arenâ€™t limited to simply trying to play the most difficult floor, but rather you can have people skip turns, take another turn, or other such game-changers. Itâ€™s not so varied that a child will be lost, but itâ€™s varied enough that adults will have decision points that keep them interested. As I said at the beginning of this article, I really like it and my family really likes it. Weâ€™re definitely not the â€œaverageâ€ family, as we play a lot of games of varying design levels and mechanical complexity, and we still choose to play this game quite a bit. Itâ€™s simply a great game to play with your kids, and a great game to gift to a family member with kids older than about five years of age or so.