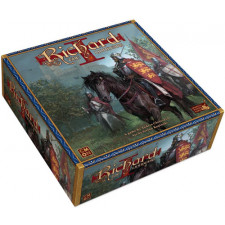 It is the time of the Crusades. King Richard the Lionheart has departed England and is fighting Saldin in the Middle East. At home, Prince John threatens to usurp the crown while Robin Hood and the Merry Men - you know what? None of this really matters. Richard the Lionheart is not a game of waging war, or stealing from the rich to give to the poor, or any of that. Itâ€™s a game of cooperation and brinkmanship. 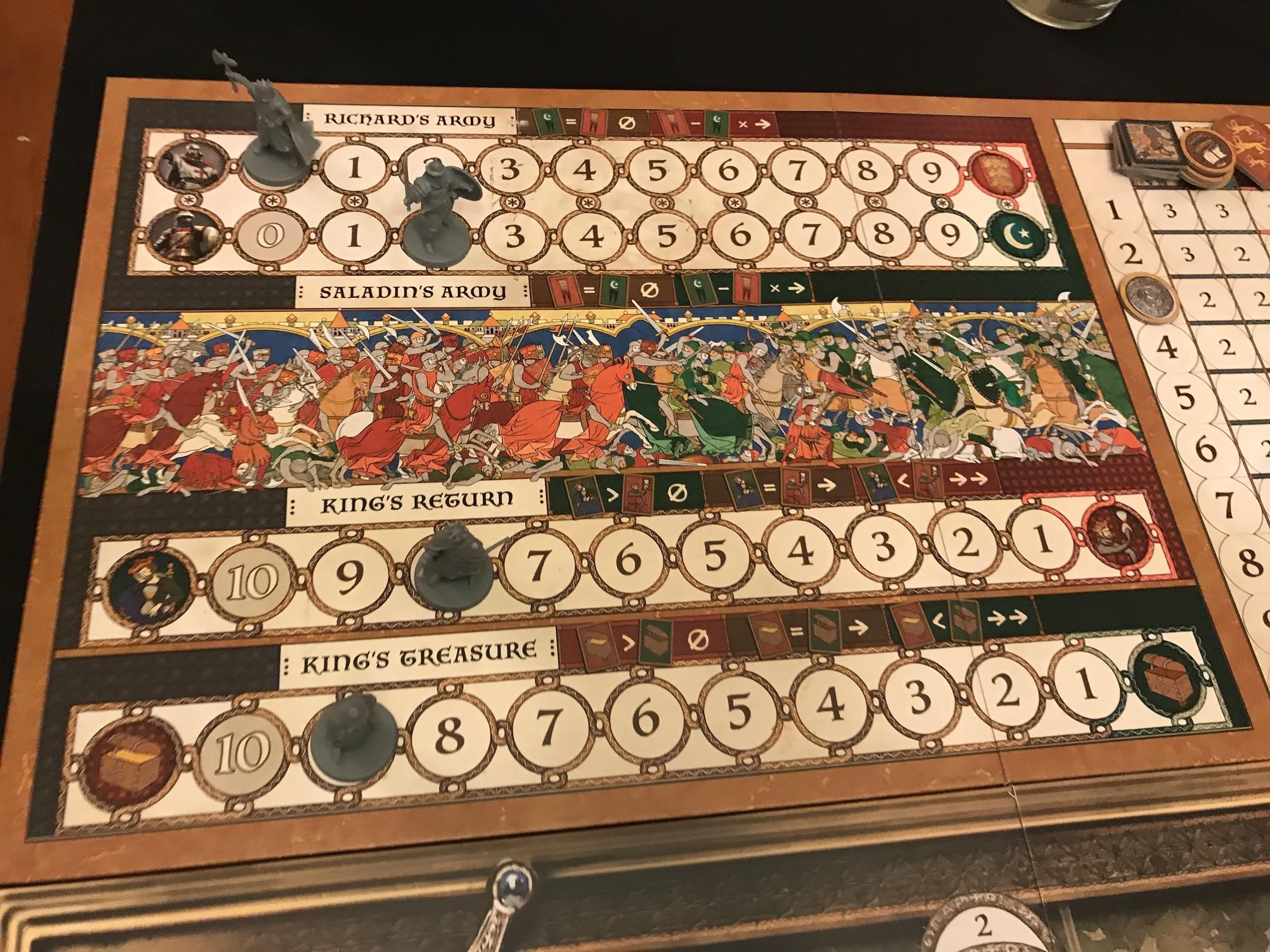 Players are divided into two teams trying to influence the events of the crusade in favor of their faction. Prince John is hoping for Saladin to win the crusades, delay Richardâ€™s return, or drain his coffers. King Richard wants, well, the exact opposite of that. To accomplish this youâ€™ll roam the English countryside collecting money, prestige, and cards that represent your influence on the larger events. These cards feed a Crusade deck that is the best part of Richard the Lionheart.

Cards are added to this deck after every round. You get 1 action to prepare and then have to feed 2 cards into this deck, at the risk of losing prestige if you canâ€™t. Into this deck go cards that influence the series of tracks at the top of the board. Youâ€™re hoping to push your track to the end before your opponents so that your faction wins, but that it happens when you have the most prestige so that you win. This is a team game of sorts, but only one person on that team is crowned the real winner.

Each card influences a certain track, and how the tracks move depends on which side sees more cards drawn. If 3 Crusade Track cards that support Richard are drawn and only 2 that support John, then Richardâ€™s figure will move 1 space closer to his return. They donâ€™t all work exactly the same but they serve effectively to put both time pressure and the risk of an opponent surging ahead on each player. Any cards left in the deck remain in the deck until the next round. This is what makes the deck sing. If your faction has a bad round then you can be comfortable in the knowledge that the deck is now stacked in your favor. This gives you cover to slouch off and earn prestige, if youâ€™re up for risking it. 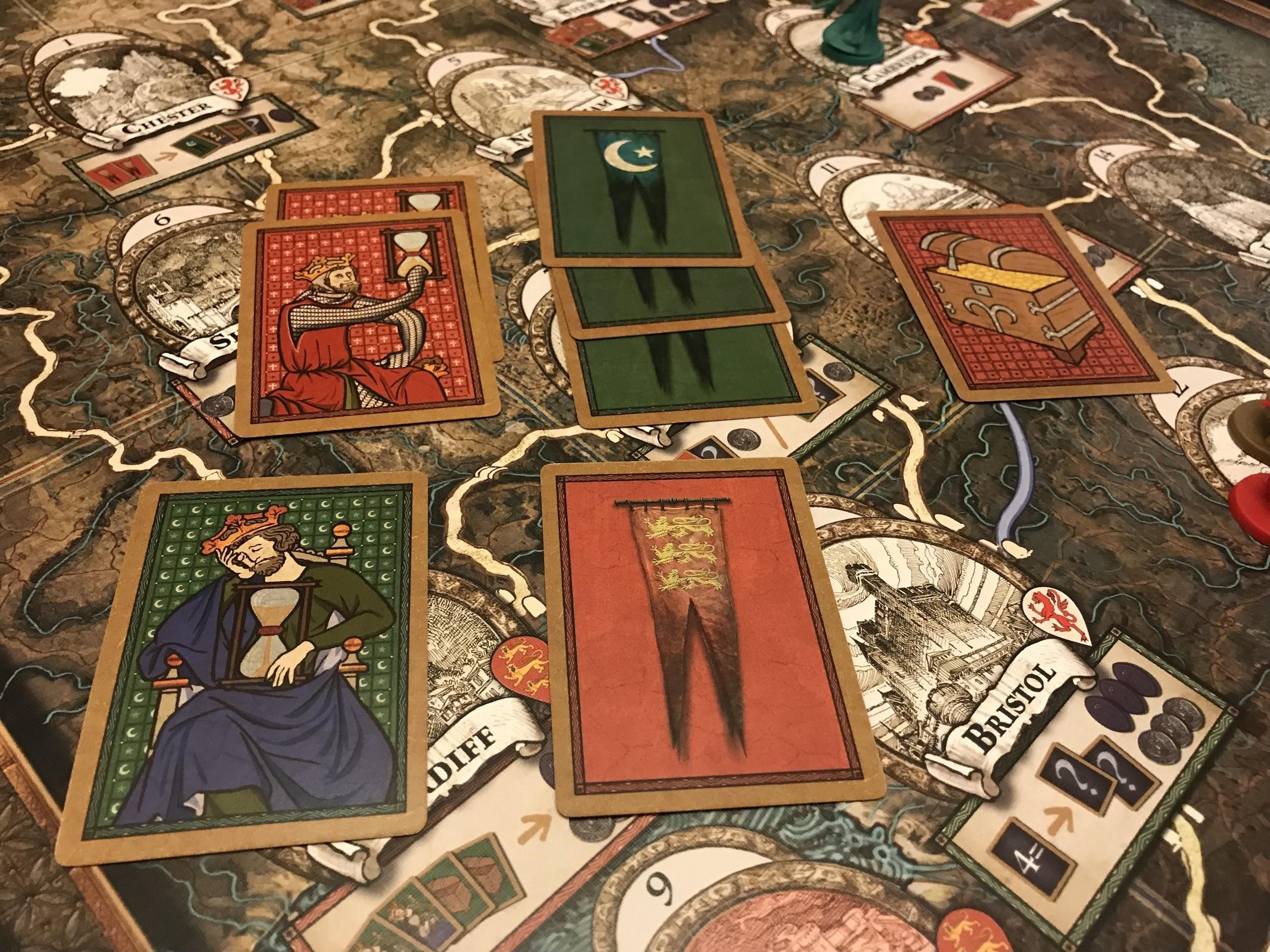 Even stacked, there is no guarantee that the winds of fate will blow in your direction. Remember that cards are added to the crusade deck every round; your opponents will constantly be fighting against you. This adds a risk to brinkmanship that isnâ€™t always present in games where a single person wins a team game. Each round also has an event-based goal that will push you away from building prestige. The risk of dumping responsibilities in your teammates' hands is palpable, and itâ€™s what will bring you back to this game.

Unfortunately not everything is as exciting. Cards, coins, and prestige are gained through a sort of networked worker placement mechanic that is functional but not particularly compelling. The upgrade system is equally serviceable and opens up options while you move around the board, but it isnâ€™t memorable. It works to feed the tension of the Crusade Deck and the fight for prestige. Similarly the unique character abilities provide more frustration than they do excitement. I donâ€™t think theyâ€™re needed, and can take away from engaging players with the Crusade deck.

Despite that, Richard the Lionheart is worth checking out. A system where you have to work together but still claw your way to top on your own is tough to get right, and Richard the Lionheart nails it. The same deck that tempts you to behave selfishly seems to taunt you when it delivers a 2nd round of cards you hoped not to see. But when you steal a victory out from underneath the overconfident supporters of King Richard? Itâ€™s great.