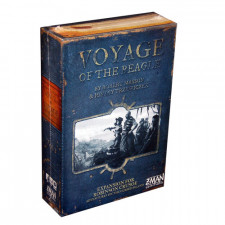 For a game as successful as Robinson Crusoe, Voyage of the Beagle feels like an expansion that you save for well into the gameâ€™s lifecycle. Itâ€™s an ambitious release that pushes the game to its limits of complexity so it can create a sustained narrative over several sessions. Its scope is admirable, but the set of circumstances to get the most out of this game is absurdly narrow, guaranteeing that the people who will enjoy Voyage of the Beagle most are only the most devoted experts of the original game. Thereâ€™s good stuff there, but it requires a huge commitment from the player to make it work, probably more trouble than its worth.

Possibly taking its cues from a print-and-play scenario released for the original game, Voyage of the Beagle is less an expansion, and more a campaign module. It gives the players all of the components and rules to play a five-scenario arc about Charles Darwin and his groundbreaking voyage on which he did the legwork that would become the theory of evolution. Players will help Charles Darwin and the crew of the Beagle as they collect samples, survive storms, travel to new islands, visit restless natives, and eventually survive disease to make it back to England to publish Darwinâ€™s findings.

One of the best things about Robinson Crusoe is its flexibility in scenario design. The original game allowed the players to take on a surprising variety of roles, whether it was simple castaways, ghost hunters, or adventuring archeologists. Voyage of the Beagle pushes that flexibility to its limit. Some of the scenarios merely add some new actions for the players, but others essentially redesign the entire experience. In particular, scenario three represents a voyage between islands, and it uses almost none of the original actions from the standard game. There is definitely a willingness to experiment with the kinds of stories Robinson Crusoe can tell.

Unfortunately that experimental attitude makes the game much more complicated. Even the simplest scenarios in Voyage of the Beagle have several new and important rules, most of which are only used in that scenario. That means that each new scenario requires the player to digest a lot of new information. The module doesnâ€™t do itself many favors here, since the new actions are spread between the rulebook and the scenario book. The rulebook seems oddly sparse by itself, and the graphic layout of the scenario book is such that it doesnâ€™t convey vital information very easily. That means that even after several games, the players will continue to discover rules they missed. The biggest usability problem is that every new scenario almost requires a dry run to make sure the players understand how the new rules will be integrated, before they can actually play and enjoy it properly.

That says nothing of the gameâ€™s punishing difficulty. Robinson Crusoe has always been a tough game, and this is admittedly something that will vary with different groups, or even from session to session. But the difficulty of the system pushes against the idea of a campaign. Players must win a scenario to advance to the next one, no small thing because of the added complexity. The game thankfully gives ways to play generate random elements so that the players can play the scenarios out of order (probably the only way this could ever be reviewed). But sticklers who want to take everything in order had better be prepared to play the scenarios over and over again as they digest the rules and try to power through to the next challenge.

This makes the game frustrating for those who really play the game for its narrative power, since the story is constantly interrupted by rules questions and replayed scenarios, many of which can be lost to a single missed rule or random element if the players arenâ€™t familiar with it already. The rulebook actually says this module is intended to be played in one sitting, something that feels calculated more as an excuse to not include a way to track campaign progress, rather than anything rooted in reality. The difficulty makes the whole thing seem more like a video game, where you need to retry levels over and over to get to the next level. It makes the experience feel much more gamey and mechanical, a sad thing to do to one of the best narrative games Iâ€™ve ever played.

The theme is also hurt by some of the narrative choices made in this game. I guess making one of the most important scientific discoveries in history needs punched up a little, so some of the obstacles encountered by Darwin on his travels arenâ€™t exactly rooted in history. Some of those carnivorous plants are big enough to devour humans, and when the Beagle takes to the seas it will encounter krakens and sirens. The presence of Audrey II and Poseidon sticks out like a sore thumb in something with such a strong historical source, and feels unnecessary in a story that was already pretty fascinating.

Voyage of the Beagle is just compelling enough that a lot of fans will want to buy it without any question, but many of them will be frustrated. To get the most out of this module, it will require a dedicated group who has fully internalized all the rules in the original game, is willing to commit to replaying scenarios over and over, and is alright to stagger around with rules a lot. It is exclusively an experts-only affair. To be sure, a lot of the things that made Robinson Crusoe so good in the first place are still present here. But all of those things were there before Voyage of the Beagle, and then they were much easier to enjoy. This module commits the cardinal sin of expansions: it makes the game a hassle to play.