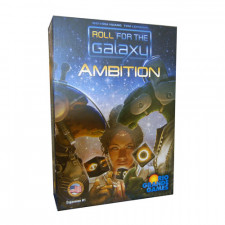 Roll for the Galaxy: Ambition Review

I love me some Roll for the Galaxy. Itâ€™s smart and interesting. And even though it is certainly a dice game, your strategy and tactics are not highly influenced by any particular roll. There are so many ways to accomplish what you want, that the dice function mostly as randomizers or little puzzles you have to manipulate to effectuate your plan. Ambition is the first expansion, but only timidly adds to the game.

Ambition adds a ton of new starting worlds and factions as well as three new elements: the Leader die, the orange Entrepreneur die, and Objectives. The leader die replaces one of the home dice in your cup at the start of the game. It has a wild symbol as well as a double symbol on each face â€“ including the new dollar sign. The dollar sign means that, after the action is completed, the die automatically returns to your cup instead of going to the citizenry. The double symbol means that it can be assigned to either phase. And, if the assigned phase isnâ€™t selected, the die transfers to the other depicted phase.

The expansion adds to the starting worlds and more than doubles the number of starting factions. Many of them make use of the entrepreneur die. That die has all double faces as well as dollar signs. To make up for the extra versatility it provides during rolls, it never matches a planet when calculating points for Consume.

Finally, the objectives enter the game. Ambition provides twenty objective tokens which say things like, â€œAssign five dice to one actionâ€ or â€œhave six goods on planets.â€ Anyone who satisfies the objective gets to claim the reward; then the objective is removed from the game. The reward is typically a number of wild symbols. They can be added to any roll and placed below any phase to get more actions if that phase is selected. They are one-time use, but if not used are worth a point at game end.

The best part of this expansion is the new starting worlds. After a dozen or so plays of the base game, you begin to see a lot of the same combinations and resultant plans. The new worlds greatly shake that up and offer different incentives and synergies. The faction abilities, in particular, are a great way to coax players into adopting heretofore neglected strategies. For avid fans, this huge boon may be worth it on its own.

Although the game also adds new worlds for you to explore, it only includes five. That may sound disappointing, but itâ€™s actually a fair decision. Adding in a ton of new worlds â€“ especially if they focused on the new expansion elements â€“ would undeniably change the mix and consistency when exploring. As it is, the base game was nicely balanced. Adding in five new tiles means that balance stays the same and you arenâ€™t overwhelmed with new items. Still, five new tiles do not quite usher in a revolution of new play opportunities.

The objectives are a fair module, and easily included or excluded based on player preference. While those included in a particular play wonâ€™t all be tailored to your strategy, there are generally enough of them that a few will be enticing. They provide just the right encouragement for a player to deviate slightly and try something unusual. And in a game where the main strategies tend to be about building everything or shipping everything, deviation is quite a boon.

Sadly, itâ€™s the new dice that are least welcome in Ambition. In the base game, the dice randomized your options but you were given plenty of tools to move things around and get what you needed. The leader and entrepreneur dice, though, tilt the needle just a little bit more toward luck of the roll. For example, if you want to Scout, then the face with Explore and a dollar sign is straight up better than the face with Explore and Develop. And, there isnâ€™t really a way to flip it to the side that has the bonus you were hoping for. So while the die is better than the Home dice in every way, the little bonuses it provides are entirely random and luck driven. Itâ€™s an unfortunate break with the base gameâ€™s paradigm.

The leader die has its benefits, though. It tends to speed up the early game and gets players into the meat of their strategies more quickly. Plus, if you like the thrill of a good roll, then the leader die can bring a bit of that to the experience. The net effect on the game is positive. And despite some misgivings and caveats, it will rarely be excluded from my table. But I hope this doesnâ€™t signal that future expansions will continue to shift from strategically manipulating a roll, to relying on the fickle whims of the dice gods.

In the grand scheme of things, itâ€™s an awfully small nit to pick. Mostly, Ambition builds on what Roll began. But despite the inclusion of new elements, the expansion doesnâ€™t revolutionize the game or create a wholly new way of playing. Instead, it takes a game you like and adds just a whiff of something more. The expansion is very modest. A little addition here, a few tiles there. Itâ€™s like extending your backyard fence out a foot in each direction. The extra room is nice, but it wonâ€™t change your day to day life. Everything in the expansion is positive, but there is nothing revolutionary commanding its inclusion. Ironically, it lacks ambition.