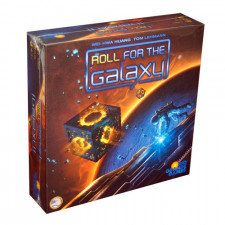 Roll for the Galaxy Review

Race for the Galaxy has sold quite a few units since its initial release so it was only a matter of time before the inevitable â€œdice versionâ€ appeared. Dice versions of popular board games are almost uniformly a bad idea because they tend to remove strategy and inject the (airquotes) â€œfunâ€ of dice rolling. So I wasnâ€™t what you would call enthusiastic about Roll for the Galaxy. But, after even one play, I changed my tune. Roll for the Galaxy is a better-than-expected dice game that offers ample strategy to offset the whims of chance.

In Roll for the Galaxy, players represent different intergalactic civilizations expanding their empires. The players start with five dice as well as two starting worlds. The starting worlds can give the players additional dice or in-game abilities that will provide some strategic guidance as to how they should proceed.

On a turn, all the players simultaneously roll their dice. There are five actions available: Explore, Develop, Settle, Produce, and Ship. While all the starting dice are the same, players will accumulate dice of different colors during the game which have different faces. The red military die, for example, has more Develop and Settle faces so that you can extend your reach to new worlds. The yellow alien technology die, on the other hand, has more Wild results than any other.

After rolling, players line their dice up behind their screen putting each die grouping them with other dice with the same results. Then they choose one action that they guarantee will be taken. So, maybe I choose Explore as my action. I can use any die to force the explore action, not just one that happened to roll explore. Then, all is revealed. Each forced action takes place. So if another player forced Produce, all of my Produce dice take place. If no one forced Produce, then my Produce dice go back to my cup.

After use, dice go to a Citizenry area and only go back into your cup to be rolled again if the player spends money. Players must therefore manage an economy to ensure that dice consistently return to the cup while using as many dice as possible to ship goods for points or build out new worlds for points and abilities.

So, why is this dice game more fun than others? Well, because it doesnâ€™t feel like a dice game. Sure, you roll a lot of dice, but you arenâ€™t at all beholden to your rolls. Players can always take a needed action by forcing it even if they didnâ€™t roll any dice of that type. Second, players can reassign dice, although they must return a die to the cup to do so. Again, nasty luck is overcome by in-game abilities, downplaying the luck factor.

Rather than roll dice and do as instructed, players roll dice and then perform a little mini-puzzle. The goal of that phase is to arrange what you rolled in a way that will allow you to do what you want. Those little puzzles are fun and keep you engaged. It is a rare occurrence indeed that you roll something you canâ€™t make use of.

But that also leads to the major criticism. Interaction is pretty much limited to guessing what actions your opponents will force. There are no direct attacks. Each round begins with a roll, and then silence as players stare downward behind their screens. Groups looking for a more jovial atmosphere might not find it here, at least during the start of each turn.

But what it lacks in interaction it makes up in strategy. The game allows for a variety of competitive approaches. The shipping strategy is solid where players first produce goods and then ship them for various points. This must be balanced around an underlying economy to make sure you can afford to get your dice back after shipping. Alternatively, the build-a-bunch-of-worlds strategy can also yield high points. With this approach, the goal is to race the game to the end before shippers have time to milk their planets for points while also snapping up a few end-game bonus planets.

And, like Race, there is the element of bluffing and deduction. Letâ€™s say I roll a bunch of shipping and producing. Great! If I can take both actions, then I can score a lot of points this round. If only one gets taken, then Iâ€™ll either produce and have to wait to ship, or ship and have nothing produced.

At that point, I look around at my opponents. Maybe one player already has a lot of produced goods. They might force a shipping action. I force production and if I guess right, then both will happen. Or, maybe another player is empty and I think likely to produce. So I force shipping and hope theyâ€™ll produce.

The components are great. The dice are a little on the small side, but not so small as to be annoying. Each player gets a cup for use when rolling the dice that helps keep the rolls contained behind the playerâ€™s screen rather than scattering all over the table. And the world tiles are on thick cardboard that really has some weight to it.

For a dice game, there is relatively little luck. In fact, Iâ€™d say, there is more luck when drawing worlds (which are pulled randomly from a bag) than in any of the dice rolling. Roll for the Galaxy players will feel fully in charge of their fate, even though individual turns will be delightfully randomized by the dice.