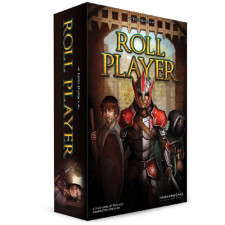 I took my daughter to a play date a couple of weeks ago and when the mom found out that I was playing Warhammer with my son that day, we got to talking about Dungeons and Dragons. She said "I must have rolled up 20 characters and never did anything with them". Anyone who has been into roleplaying games can relate, I'm sure- who hasn't gotten all excited about making those random die rolls into a living, breathing character only to relegate the paperwork to a folder or the trash as a campaign or regular game group never materializes. Roll Player, designed by Keith Matejka, asks the meta-question "what if rolling up your character IS the game?" 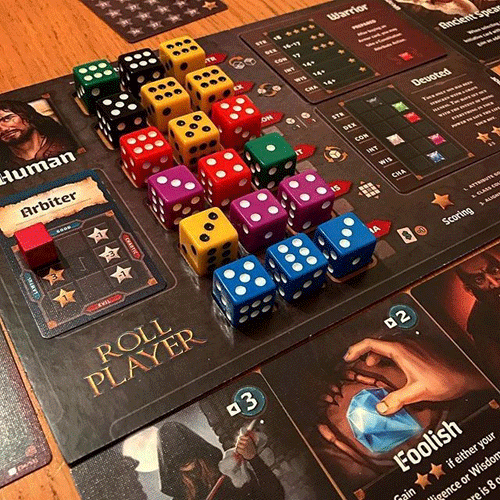 Who made this Foolish Human an Arbiter?

The answer is that it becomes something of a dice drafting game, something of an optimization puzzle. The concept is that each player takes a character sheet which designates a standard fantasy race, a backstory card, an alignment card and another card to identify this blank slate's class. With this setup, players roll up some starting numbers for each of the principle RPG stats and set out to reach certain Reputation Point goals as prescribed by these seed elements.

Process is easy to follow. At the beginning of a round, dice of various colors are pulled out of a bag and are rolled equal to the number of players (a minimum of three dice if you are playing two or by yourself). A drafting round follows, and everyone picks a die and slots it into one of the three spaces available for each stat. The die you pick is also on an initiative card, which determines turn order for buying skills, traits, weapons and armor from a market display. These give you the expected bonuses and perks, with the armor also providing additional Reputation if you manage to collect sets. Skills give you a tap-able ability, traits may give you an "always on" effect or impart a bonus at the end of the game.

It's basic stuff, but there is a neat twist to drafting beyond the weighing of die value against initiative. When you plug a die into a stat slot it not only increases its aggregate value, it also lets you take an action associated with the stat. So you can move dice, flip them over, reroll them, swap them and manipulate otherwise locked-in results. So when you take a die, you've also got to consider the ability you want to use. And there are also Reputation points available based on your backstory card if you have dice of specific colors in certain slots on your grid at the end of the game.

At the end of the game, everyone gets points based on their unique matrix of criteria, which includes the total values of your statistics. Depending on your class, some stats are naturally worth more points than others so you'll find yourself jockeying the dice around to hit those marks- and you'll find yourself struggling to overcome race-based penalties that may require you to have more than 18 on the three dice in the row. That is of course where some of the skills and traits come into play, boosting dice of certain colors or values in some cases. And then you've also got to worry about meeting your alignment expectations- you move a marker around on the alignment card through the classic Lawful/Chaotic, Good/Evil spectrum. If your character is branded a Psychopath, you'll obviously want to bump that cube toward Chaotic Evil for maximum points.

And then there is an economic element, which gold earned from selecting yellow dice, forgoing a market buy, or from a few of the skills and talents. You can take a special discount marker if you play a die into Charisma and get a dollar off your buy for the round. Or you might have a trait that gives you Reputation for having a certain amount of money at the end of the game. 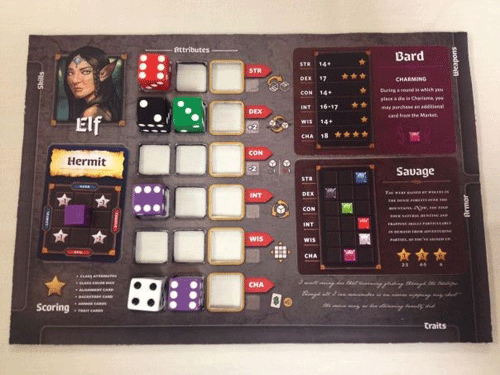 And here we have Katniss Everdeen, the Savage Hermit Bard. I suppose she performs for herself, which is appropriate since this game is best solo.

I really like this game. It's a novel concept; it's smartly designed with a nice mix of simple process and intricate mechanics. It looks good, the rulebook is right on the mark, and it will definitely get your gears grinding toward a definite sense of reward. There is a satisfying narrative in watching a character form as you play the game. It's a little math-y and very puzzle-y, but you'll find smart combos and "aha" moments throughout any session of it.

However, there is a rather Sartrean qualifier that is the reason why this game didn't make the four-star tier. All of the above positive press fades when you play this game at a table with more than two players. Hell is, indeed, other players. I played this game with four the first time out and we all might as well have been playing the game independently of each other. The two player game is passable with conversation and casual play, but the sense of competition is nil. There is virtually zero player interaction aside from having an initiative card and buying something before someone else. There is one card in the market deck that impacts other players. Beyond that, it is the very definition of passive-aggressive, multiplayer solitaire. Getting a crossbow before someone else and then comparing points at the end to see if that mattered is not player interaction. With that said I think this is a great solitaire game and I think it is in this setting that the game is the most satisfying and fun to play. It takes about 20 minutes but it has a rich, full sense of strategy, planning, and tactical shifts over the course of that duration. I also think it would be an ideal app and I wouldn't be surprised to hear that one was in the works. Whether digital or not, expansions are almost assured and these may assuage my dislike for the multiplayer game. But for today, Roll Player is a terrific solo game and a terrible multiplayer one.