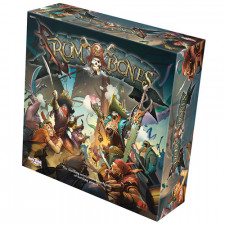 What images and tropes come to mind before any other when you think about playing pirates? Is it a race around a famous island in the Caribbean? Or perhaps the divvy of plunder that takes place after a glorious raid upon a merchant vessel? Maybe itâ€™s a crew of wacky, peg-legged buffoons diving into the depths to see who can hold their breath longest. Probably none of those things, though. Am I right?

If youâ€™re anything like me, and I hope that you are, your favorite pirate shenanigans involve cannons blasting holes in wooden hulls, gang planks being slammed down between two crowded ship decks, and bloodthirsty buccaneers swinging from the rigging to board an opposing vessel. And until now, there werenâ€™t a lot of games that gave me the epic pirate experience I so desperately crave.

And then came succor in the form of Rum and Bonesâ€”a tabletop game designed along the rough template of a video game genre called â€œmultiplayer online battle arenasâ€ (the cool kids say â€œMOBAâ€) in mind. In these types of games, a small number of player-controlled heroes on each side of a skirmish do battle against each other amidst swarms of countless, mindless minions. Typically the goal is to reach a number of objective points or destroy a series of targets. While these games are usually of the medieval fantasy or modern and futuristic warfare flavor, Rum and Bones sets it all in a pirate milieu.

Players take control of one of two factions in the core game: the classically-pirate-themed Wellsport Brotherhood with incredible offensive power, or the undead Bone Devils with plenty of healing and damage mitigation. Dozens of deckhands and bosuns comprise each player's crewâ€”a brave lot that charge endlessly toward your enemy's sails, rigging, and wheel with single-minded fury in hopes of destroying objectives and accruing points and gold. As your crew diesâ€”and they will die in drovesâ€”replacements appear as fast as their brethren were slain to take up the cause: hack apart three enemy ship features or sea monsters before your rivals do, being the first to gain six victory points and sail away with the lion's share of Davy Jones' gold. Or maybe just to sink your opponent's ship and call them rude names while they tread water in the middle of a freezing ocean. Whatever your ideal â€œwinâ€ outcome narrative may be.

The aforementioned crew is just backdrop, serving as fodder and a small offensive boost for the shining stars of Rum and Bones: the heroes! Captains, Gunners, Swashbucklers, Brutes, and Quartermasters are deployed three per team at a time, shared between players on each ship when playing a game with more than two players. Each character role has his or her own specialties and powers, which vary from the Captain and Quartermaster's buffing of allies, to Gunners' ability to target distant enemy heroes with an attack, or a Brute's ability to absorb incredible amounts of damage and then knock another hero off the ship's deck and into the Kraken-haunted sea.

Kraken-haunted? Thatâ€™s right; thereâ€™s a kraken. In addition to their crew and heroes, players get a hand of cards specific to their faction. Many grant bonuses and boons of such incredible power that the massive and deadly leviathan of the deep is drawn to the surface to attack both players. Once summoned, however, the killing blow against the kraken is worth two victory points and some very hefty bonus dice for your heroes in battle!

Ultimately Rum and Bones is a tactical combat game, the likes of which are countless in the tabletop gaming hobby. There's something compelling about toy soldiers brawling within the confines of one-inch squares that rarely, if ever, gets old for some gamers. The good news here is that Cool Mini Or Not has published something a bit different from the usual suspects. While pirate-themed skirmish games have come and gone in the past, never before have the rules for one been so intuitive and elegant in their simplicity. Rules exist that need to exist, and any excess has been chopped off and stuffed into the Tide Decks as special effects.

This is the kind of game that takes two or three turns of game play to learn, and then you'll rarely need to reach for the rulebook again. Things like riggingâ€”swinging from ship to shipâ€”are handled via a single die roll equal to, or better than, the number of squares moved. Knocking a character overboard is as simple as moving him into a sea space; there's no saving throws, no contested rolls, and no charts to consult. Combat rolls use a target number for the ability, not the defender, and all information for an attack is found on its character's card. While my first game of Rum and Bones took over three hours just getting a feel for the pace and flow of a battle, subsequent plays have wrapped up easily between sixty and ninety minutes.

Finally, there's the question of replayability. Two crews of five heroes each may seem like it will get old and battles could be similar after a while. Fortunately, there's a plethora of expansions availableâ€”from hero packs that add to the base factions, to entirely new factions like the French-inspired La Brise Sanguine and the eastern-flavored Mazu's Dreadful Curse. Each hero and faction bring their own unique abilities and tactics to the table, allowing players to mix and match characters for some seriously killer combinations.

I don't think I'll ever get tired of this one. Rum and Bones has hit my table at least once a week for the past few months, and it's always a great experience all the way from crew-building to that last, frantic attack against an objective to secure the victory. While easy to learn, intuitive design shouldn't be confused with a lack of depth; there's still potential for a great amount of tactical play and strategy involved every time you move a hero. If you're looking for a solid skirmish game but don't have time for painting dozens of models or learning volumes of arcane rules, itâ€™s a definite â€œrecarrghmendationâ€.