Caught in a Web: Scenario Pack:

If nothing else, the third edition of Runebound benefitted from long practice, the edge of its blade ground to a fine edge. So what if its setting was as likely to raise a yawn as get the blood pumping, or that combat consisted of tossing pogs onto the table, or that the tales it spun tended to resemble the rambling happenstance of an amateur novel rather than a well-edited epic? In place of something mind-blowingly original, what Runebound offered was a near-perfect beerâ€™nâ€™pretzels experience, perfect for conversation, drinks, and chucking dice. And by dice I mean pogs. Both dice and pogs.

However, like a seasoned adventurer, a game like Runebound marches on its stomach. And in this case, that means expansions. New heroes, magical artifacts, quests and more were all promised by Fantasy Flight Games to give the game new adventuring legs as the old ones started to show their wear. The idea was that these would be released in pairs, with one focusing on padding the base gameâ€™s content and the other adding an entirely new scenario. True to their word, the first pair â€” The Gilded Blade and Caught in a Web â€” is now available. 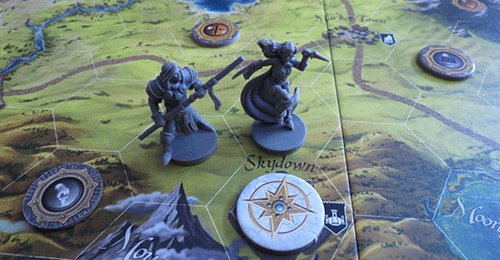 Letâ€™s start with The Gilded Blade, mostly because Iâ€™m a Bad News First sort of guy. At first glance, this is exactly what I wanted from an adventure pack. Inside that box youâ€™ll find more of, well, pretty much everything. Nearly every deck from the original set finds itself fleshed out in some way, from new adventures to new assets and skills. Best of all is the stuff that focuses on accumulating wealth, with goods like Contraband of uncertain value, breakable Ornaments, Thiefâ€™s Tools for swiping stuff from the market, and a Royal Uniform for schmoozing extra gold from unsuspecting merchants. You can even learn skills like Investments or Negotiations to earn a little extra on the side when other players conduct business.

The new hero, Red Scorpion, is the Terrinoth settingâ€™s token nekked lady, more interested in flashing her assets than in avoiding getting jabbed in the clavicle, gut, face, or femoral or brachial arteries, but at least sheâ€™s a serviceable mid-road character, boasting the versatile new â€œtacticsâ€ pog that lets her copy another of your combat tokens in battle.

All this new stuff is well and good, and adds a dash of flavor to a recipe that had started to taste a little too familiar. Unfortunately, a couple problems rear their ugly heads like a generic two-headed hellhound. First up, rather than just mixing these into the original decks, Runebound expects its players â€” the easygoing beerâ€™nâ€™pretzels crowd, remember â€” to sort out each deck every game, counting out all seven skills sets, all four asset decks, and each adventure deck, in order to mix up a balanced cocktail. Now, Runebound has always required a bit of sorting, mostly centered on its adventure decks, but picking through the microscopic icons of the half-sized skills and asset cards is a chore, and defeats one of the greatest purposes of playing Runebound â€” the ease of getting it to the table. Sure, itâ€™s possible to plop everything together into a pudgy mound, but apparently this wonâ€™t result in a proper balance to everything. Ignore the instructions at your own risk.

The other issue is that there simply isnâ€™t all that much there, especially for how much Fantasy Flight has decided to charge for the box. Sure, you get a bit of everything, but there are only a few new cards per set. For example, aside from in Red Scorpionâ€™s repertoire of combat moves, the new tactics ability only appears in a handful of instances. Itâ€™s all good stuff, but be sure to dive in with your eyes open. 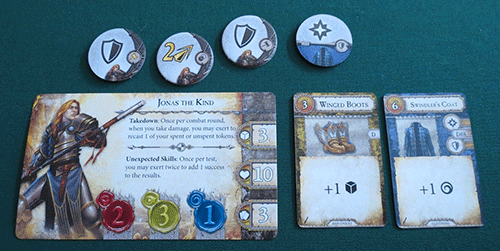 Caught in a Web goes in an entirely different direction, with the only real point of comparison being its new hero. This time itâ€™s the hunky Jonas the Kind, who can absorb damage to reuse spent combat pogs. The real draw is the new scenario, pitting its heroes against a giant-spider-slash-sorceress named Ariad (itâ€™s confusing), who covers Terrinoth in web markers and will eventually appear in the corner of the map at the end of the first act and gradually make her way towards Tamalir, where sheâ€™ll wreck the capital city and end the game.

If that sounds like dÃ©jÃ  vu all over again, it isnâ€™t just the Terrinoth setting talking. Despite a host of new adventure cards, Ariadâ€™s major story beats feel a whole lot like facing Margath from the vanilla game again, though to her credit at least Ariad appears at the opposite end of the board and takes a different route to the center.

Itâ€™s a fine scenario, a bit more challenging than what weâ€™ve seen before, but a couple things prevent me from wholeheartedly recommending it. Ariadâ€™s web markers act against heroesâ€™ ability to move around the map, gumming up an already ponderous game. This isnâ€™t an enormous criticism, but when combined with the unoriginality of the scenario itself, itâ€™s enough to make me wish that the folks at Fantasy Flight would have hit us with something more dynamic than the â€œmonster appears and moves towards Tamalirâ€ formula again.

All in all, I enjoyed both expansions, though The Gilded Blade feels a little overpriced for what arrives in the box and Caught in a Web too well-trod. Perhaps Fantasy Flight is reserving their best for last, because the description of the next pair of expansions sounds much more enticing.