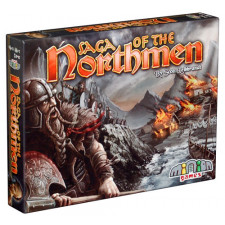 Saga of the Northmen Review

Much like zombie games a few years ago, games based on the exploits of the Vikings are now getting their day in the sun. Saga of the Northmen is one such game, casting players as fierce Viking warlords intent on subjugating the European populace and plundering their shiny things.

Which, in the context of this game, means placing lots of cubes, of course. Strangely, perhaps, the setting integrates smoothly with the mechanical theme, as players land more and more invaders on Europeâ€™s ripened shores before beating each other to a bloody pulp in a contest for the aforementioned shiny things.

Itâ€™s a unique experience in that youâ€™re fighting for control of seven different kingdoms for the first half of the round, but there are no points available within the kingdoms themselves. Instead, the board is populated with plunder tokens as this â€œbiddingâ€ round goes on, setting the stage for the real battle. If youâ€™ve positioned yourself well in round one, youâ€™ll be able to launch effective assaults on the contested territories containing plunder and points. If you havenâ€™t, youâ€™ll have to lick your wounds and try again next round. Winning the first phase of the area majority contests leaves you with plenty of cubes to send to other parts of the board to rack up those precious points. 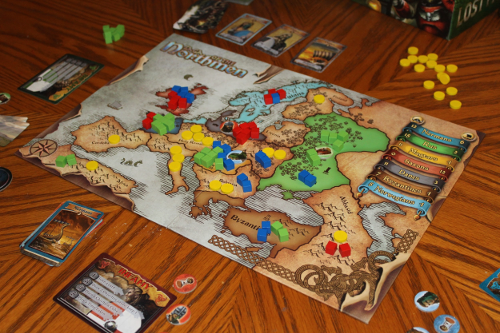 To crush your enemies, see them driven before you, and hear the lamentation of their cubes.

It does feel quite like pillaging, or as much as a collection of cards, blocks, and tokens can. Armies are marshalled in key locations and then marched out to do battle, with the winner taking all and the loser rallying back to hopefully fight another day. Fleets are amassed on the coastline and launch out to steal a juicy territory right from under an opponentâ€™s nose, so long as you play your cards right and time your attack well.

It leaves you with a lot to chew on, so while turns are brisk, choices are anything but simple. Play a card, draw a card, and pass play to the next guyâ€”but do you shore up your lead in the center of the board in preparation for a land assault on the Holy Roman Empire or the provinces of Italy, or do you land your longships in unclaimed Norway, where there may be less points available but also less competition? The game is rife with choices like these.

Some players may not enjoy the sting of bad luck if they canâ€™t draw the cards they need to complete valuable trade routes or contest the lead playerâ€™s dominance of a key kingdom, but the game offers several avenues of mitigation. Players who lose lots of battles are compensated in the form of infamy points, which allow them to pull off major power plays later in the game. Further, players can influence what kinds of cards they might draw by selecting from a display or drawing blindly. But ultimately, you must play the cards youâ€™re given, and not the ones that you wish you drew, as with many hand management games. In this context, it works nicely and will favor players that can adapt to a situation, no matter which way the wind is blowing.

As with most area majority games, working together against a strong player is a must. Shifting alliances and whiny, sniveling table talk abound, and itâ€™s glorious. If one player jumps out to a strong lead in the first round, you better believe no oneâ€™s going to let him gobble up well-positioned kingdoms in the next round without a bloody fight. This of course creates space for losing players to sneak by and narrow the gap. 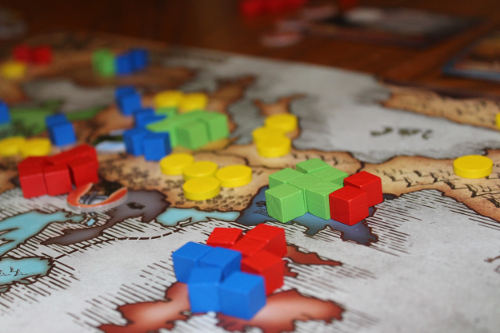 Fleets prepare to terrorize the mainland, steal their goods, and trim their hedges.

Catch-up mechanisms or no, make no mistake that this game is a classic, vicious Euro through and through. If youâ€™re looking for a non-confrontational game where players donâ€™t get their feelings hurt and the design spits out points like a broken gumball machine, look elsewhere. Itâ€™s El Grande lite, under 30 minutes (and of course, not quite as brilliantâ€”but what is?).

Saga of the Northmenâ€™s unique mechanisms and snappy pace mean that itâ€™s a worthy contender in a crowded sea of area majority games. It can be knocked out in under an hour with minimal setup and a nice, light footprint on your table, and itâ€™ll leave you feeling like a Viking, or at least a really clever pusher of colored cubes.