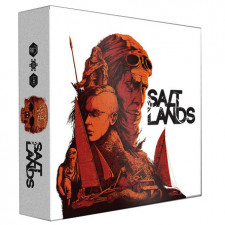 If there was ever a target audience for Saltlands, the newly released, post-apocalyptic escape game from Antler Games, I am it. Iâ€™ve been preoccupied with the end of civilization since my youth, when I started ignoring the priest and reading the Book while at Mass, and specifically, that whole Apocalypse portion at the end. Some people call it Revelations, the English translation of the Greek â€˜apokÃ¡lypsisâ€™ but, thatâ€™s the origin for those of you who are, like me, fascinated with how civilization ends. So, in short, I wanted to adore this game before I ever opened the box.

Sadly, I adored it less than I appreciated it, and for all its interesting bits there were an equal amount of frustrating and possibly even design-mandated pains in the ass that made no sense. The irony is that the gameâ€™s premise is quite simple: Get out of the desolation of the Saltlands, what the game calls the once-wet ocean floor, by exploring areas, collecting items, and finding rumors which will point you towards the great egress from the hell that is desert life. What makes this different from other post-apocalyptic fare is that thereâ€™s 15 different ways to play the game, featuring three difficulty modes and five different game modes, many of which are essentially only hairsâ€™ breadths distant in the most meaningful ways. 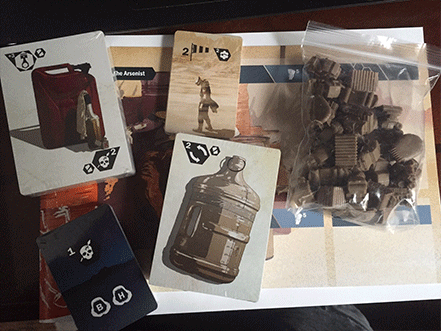 All of this sounded intriguing when I read the rules, but the further I got into the book, the more I started realizing that the game is basically a game about skirting the edges of tiles, seeking more locations to pick up stuff in order to burn through all of the tokens in order to be able to meet the victory conditions. Granted, thereâ€™s more to it than that, but most of the â€œmoreâ€ is presented as armed raiders harassing players both in-game and in the meta, since combat is so puerile. Itâ€™s inherently frustrating to fight raiders because while they can whittle you down over several turns, when attacking them, you either kill them outright or do no damage to them. Thatâ€™s the single most annoying thing about this game, and was the deal-breaker for me keeping the game.

Thereâ€™s other annoyances, such as the graphic design which is fairly clumsy, and the copious amount of icons, which is actually clever but takes a long time to remember and apply correctly, but thereâ€™s also a lot of interesting things in the game that, for some, may outweigh some of the less appealing bits, not the least of which are the beautiful, oh-so-damned-awesome raider vehicle miniatures. I literally just shipped this game to a friend and I was incredibly tempted to snatch out some of the cars for use with my Rush nâ€™ Crush set. These things are unequivocally awesome and represent the peak of the gameâ€™s presentation. What baffles me is that they spent the money on those awesome vehicles, but used cardboard standees for the characters, especially considering the fact that the charactersâ€™ main form of transportation is initially a sail-equipped vehicle. That wouldâ€™ve been a bad ass model, if it was included. 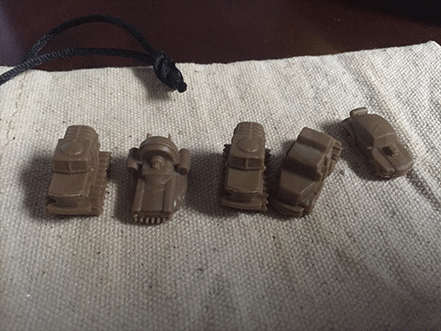 Beyond the spectacular vehicle models, the illustrations are superb and completely convey both the setting and theme in abundance. They capture the overall â€œvibeâ€ of the game in an exemplary way, and while the graphic design fails in some ways, the game is still magnificent to look at. The graphic designâ€™s flaws are actually only mildly annoying with the greatest issue being that the several stacks of cards have nearly-identical backs, with only a background icon indicating which stack they belong in. This isnâ€™t that confusing, on its face, but it makes setup and tear-down more tedious that it had to be. Also, the hexagonal exploration tiles are more than a little bland, which is a truly sad thing when all of the card illustrations were so remarkable.

The best two parts of this game, though, may outweigh a lot of the bad ideas because theyâ€™re so well implemented. The first is the wind mechanic, which has a tremendous amount of influence on movement and the cards in playersâ€™ hands. This is quite novel in many ways outside of legit Age of Sail era wargames, and adds a huge amount of strategy to the game. The other true gem in the box is the optional game modes. At first, I thought it was kind of a gimmick that didnâ€™t add value but in reality, after several plays, it really makes a ton of sense. Granted, they arenâ€™t that much different in most meaningful ways, but they do make a difference in the details. Playing the cooperative mode is a far cry from the Cosmic Encounter vibe given in the semi-cooperative mode because it provides both carrots and sticks with regard to cooperating. Players may be eliminated from the winning â€œteamâ€ by some clever play, and that adds a lot to the game; itâ€™s probably my favorite mode. The competitive game, however, is very gnarly and has teeth.

Normally, you only have to worry about picking up clues and avoiding the areas of engagement around raider vehicles. The AI that controls the raiders is nothing interesting, but when you toss in deadly, thinking opponents who can steal your victory cards, the game changes inexorably. What was once a game that could be â€œmathed outâ€ in many ways becomes a game of psychological warfare. At the end of the day it's a very mixed bag. I can see people with predilections toward more sterile European-style games enjoying this in cooperative mode, but for a hard-core, dice chucking maniac, this simply didnâ€™t do what I had hoped it would. Itâ€™s clever, but unfortunately, clever doesnâ€™t always equate to fun.