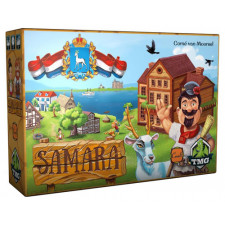 An ancient philosopher once said, â€œBut there never seems to be enough time to do the things you want to do once you find them.â€ Jim Croceâ€™s words actually apply to many modern designer games, but they are particularly apt in Samara. Time is a premium commodity as you race to become the most prestigious builder, balancing not just the months, but the old equation quality vs. quantity.

Samara, from veteran designer CornÃ© van Moorsel, is a straightforward title with an effectively interesting distinction - a monthly time track. It has workers, but itâ€™s not worker placement. And that calendar influences what they can do and how often they can work.

Thirty building tiles randomly seed the board. Which column (out of 9) and row (out of 4) each is located is important. The grid board also denotes where tools are located. There are three types, but these tokens are randomly placed on top of building tiles that occupy designated spaces. Another three boards comprise the calendar divided into four months. These lay in chronological order with the current month (as in real life) lined up with the â€œNowâ€ column. Subsequent months will then correspond with successive columns. 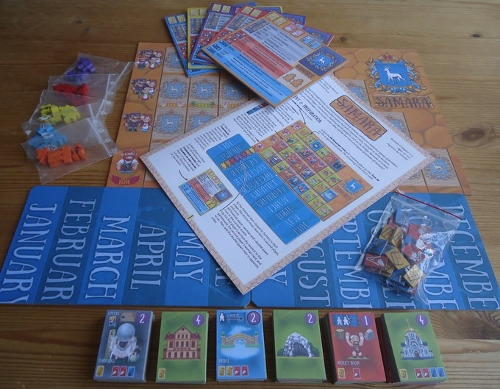 Each player begins with two workers on the first month, a single female worker and a double strength male worker (noted by two meeples stacked together). When itâ€™s your turn - if you have at least one worker in the current month - you take one of four actions. You can move one or more workers ahead a number of months and take a tool or building tile from any row in that column... However, your workersâ€™ aggregate strength - one per meeple - must be equal to the row number in which the tile or tool that youâ€™re taking is located. Some buildings also require between one and six tools to build, hence the importance of collecting a set.

If youâ€™d like to increase your workforce you can instead send a female worker many months ahead and add another. Itâ€™s not always nine months, but whatever. If you have nothing else to do or want to gather your laborersâ€™ strength, you can give one a vacation and simply move that worker to the next month where you have other meeples.

The game ends when all tiles are claimed. Each is worth various points, but several also provide a little bonus - or penalty. The penalties are more like trade-offs for constructing very valuable buildings. Others strengthen your workers, some manipulate how they traverse the calendar and a few even ding your competitors - though honestly theyâ€™re more of a nuisance, as opposed to a vicious â€œtake-thatâ€ element.

Samara is an excellent lightweight, fast-paced design with a central gimmick that doesnâ€™t feel gimmicky because itâ€™s so effortless. The calendar time track works as intuitively as itâ€™s designed and with little fiddliness. When the current month is emptied of workers, simply slide the boards down until the next month occupied with meeples is in line with the â€œNowâ€ column. While traversing it, you need to consider how much time you want to spend for a particular building or tool. You might race ahead several months to take a choice item, only to sit and watch others grab multiple things as they work their way through the calendar at shorter clips.

This element allows players to explore the quality vs. quantity theme. Spending extra time to earn something valuable is usually more advantageous than cobbling together a greater number of cheaper stuff- unless youâ€™re the Soviet army. There are scenarios literally across the board in Samara where players will weigh that decision.

Alas, there are two aspects to the design that limit its rather intriguing thematic application: randomness and imbalance. Since building tiles are randomly distributed and workers regularly advance and retract along the calendar boards, many times the best option available is one month away while less appealing choices are many months out. Or itâ€™s on a lower row, so thereâ€™s no agonizing over the decision to amass the requisite workforce in order to reach a higher spot. Those instances make the quality vs. quantity measure largely moot.

So, too, does the imbalance in tile values. Generally, Eurogames strike a formulaic note when rewarding points based on the resources required to earn them. Yet in Samara many buildings of equal value are easier to acquire, and use less time, based on the row and column theyâ€™re placed. Furthermore, many buildings worth identical points require varying tools to claim them, for seemingly no rhyme or reason. One 2-point tile requires no tools to build, while others require one, two or more. And you can nab a 3- or 4-point building for the same cost, or less, as a tile worth a mere two points.

Those two issues mean Samara will find less traction among serious and/or seasoned hobbyists who typically favor balanced affairs in which they can calculate exactly how and why they won...or lost. But as a light and puzzl-y design that moves along with little downtime, it will please family and casual gamers. You might not spend eternity with it, as Jim Croce eloquently sought in his musings, but it is certainly a pleasant way to pass the time.