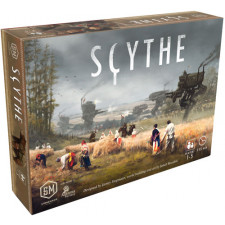 Michael: Scythe, new from Jamey Stegmaierâ€™s Stonemaier Games imprint, was one of the big Kickstarter successes of the past year. It caught everyoneâ€™s attention (and imagination) with its almost fine art quality paintings of giant mechs lurking in the mists of what appeared to be Eastern European farmlands in the early 20th century. It looked great and promised compelling gameplay rich with resource management and development with a smattering of adventure and conflict. Over the past couple of weeks Iâ€™ve been playing the game, both solo and with others, and I think it is an outstanding piece of work, top to bottom. Itâ€™s a compelling economic game with some wonderful storytelling touches, such as adventure cards with very little flavor text on them (encouraging you to use your imagination) and an actual theme that explores the intersections of agriculture and warfare.

Charlie: Scythe is great. It definitely leans towards the Euro end of the Hybrid spectrum but its mechanisms are immediate and engine building so rewarding and fruitful that it wins you over within a couple of turns. That exploration of theme is woven throughout the game and really lifts it into something special.

Michael: But some folks have taken umbrage to Scythe, claiming that it is not the 4x game that was promised and expressing disappointment that it is, in fact, a medium weight Eurogame and not the all-in mech apocalypse that many wanted. Itâ€™s this yearâ€™s Eclipse in many ways, a game where genre expectations might have short-circuited some playersâ€™ abilities to see how great this game is outside of them.

Byron: Scythe is good, but it doesn't quite live up to the hype. What I saw of the game showed me a lot of meat to pick through. It's not the game of the year, but it's gonna be in the top 10. 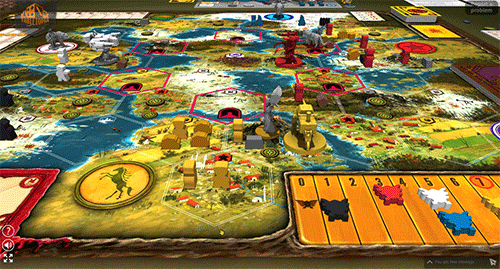 Pete: It's not a bad game, not at all. The production is opulent as can be, and the design is tight and "elegant". But it's also not what it was sold as: a 4X. You can parse all you want, but it isn't. It's a medium-weight spreadsheet-style Euro game with a smattering of combat and area control. It's also dreadfully dry and not incredibly fun. That's the biggest sin, really: it has the body of a Ferrari and the soul of a Yugo.

Raf: I have to disagree with Pete here. While I agree that this game falls hard on the Euro side of the hybrid scale, it doesn't bother me at all. As a general rule, I don't like spreadsheet-style Euro games. But Scythe got its mechanized claws into me quickly and I find myself really enjoying it.

Craig: Scythe surprised me, because I too hoped, despite all evidence to the contrary from the well-run Kickstarter, that it'd be "that other thing" instead of a Euro with chrome, but its thematic encounters and tight gameplay have apparently pulled the wool over my eyes. I don't seem to mind bloodless combat, or my nationality determining where I can cross a river, and after all these sessions, that's the tiny, growing concern in the corner of my mind. Why am I loving it?

Michael: Probably because it is so tightly designed, tightly wound and tightly constructed. Itâ€™s almost Kubrickian in its precision, yet it allows for emergent narrative along with the more regimented economics. The fighting is there, but it can feel light and in the peripheral. It is not the focus of the design.

Raf: Despite being light, I find the area control aspect to be rather compelling. I certainly find that combat rarely erupts but the tension oscillates between Cold War style territory incursions and a grim dÃ©tente. The â€œexterminateâ€ is missing from the 4x in a literal sense, but I find myself keeping a close eye on my opponents nonetheless.

Byron: At least the rulebook makes an effort to correct the expectations falsely set by the over-chromed presentation. In the Combat section, it mentions that "Scythe is just as much about the threat of combat as it is actual combat." I've found this to be true. As a generally confrontation-shy player, I never actively tried to engage my opponents in combat, but I also never let my military power and combat cards drop low enough to leave me vulnerable. Combat helped shape my game, even though I only participated in one fight, and I liked that Cold War tension. Too much fighting robs it of its impact.

Because combat is so infrequent, there aren't many situations in which the opponents' actions force you to change tactics, and the nature of the action selection means you'll spend a lot of time shuffling around the same short cycle of actions. I'm also not a fan, in general, of games where the end is triggered by player actions, a la Power Grid. Too often, they devolve into a game of chicken, and I can see this happening with Scythe.

Michael: Oh, it can get violent, even if the combat results in setbacks more than â€œexterminationsâ€. Like you are saying Byron, itâ€™s more about the tension of your neighbor (or the AI player) marching a couple of mechs to your borders than it is about moving units over to a battle board, working through a combat, and then smugly sitting there while your opponents takes his pieces off the board.

Pete: It's woefully irritating to me that the battles have no real casualties. Instead of simply placing the fallen back on their original worker track, forcing them to be re-purchased by the defeated player, they simply run home to Mom. Yes, it's a setback, but it's overshadowed by the fact that the aggressor loses both Power and Popularity, with the latter being so integral to scoring that it's unduly punitive to the aggressor. The game literally dissuades people from fighting on a systemic and mechanical level. Especially near the end of the game, when Popularity is tremendously important.

Byron: In response to the claim combat has no consequence, the consequence is a star to the victor, which is raw VPs and can help accelerate the game to its conclusion if the aggressor is already in the lead. This is on top of the hex you take control of, which was presumably important enough to fight over to begin with. And combat is the only activity that can award you stars twice, so it's definitely an option for those who want it...but it eventually, it stops paying dividends.

Raf: I would say my games have been light on combat, but not light on the tension that usually accompanies combat. I'd say it's a point to Scythe that it can bring that feeling without actually requiring the clash of mechs and the spilling of blood. When an opponent parks their mech on the other side of my river, I've already lost the combat. The loss of popularity and power is my penalty for having allowed them to get that far in the first place. At least that's how I approach it. It's definitely unlike other games that bill themselves as 4x.

Michael: Absolutely true. There are non-combat focused elements like the popularity thing, which adds such an interesting dimension while maintaining the through-line of its themes and narrative. I find that a lot of 4x games or â€œepicâ€ Dudes on a Map games get bogged down when it comes to martial affairs- much like this discussion, which has focused almost entirely on what combat there is or isnâ€™t in Scythe. Or they wander off into kitchen sink mechanics and lose focus, sort of like how Star Wars Rebellion completely stumbles by having that horrid combat system that combines dice and cards. In Scythe, every mechanic and subsystem is streamlined and purpose-built.

Craig: Much like SW Rebellion, some aspects of the game exist purely for streamlined play, and I wonder if, unlike Rebellion, the gloss will eventually fade and I'll find myself staring at a dry, optimized engine. I keep telling myself the variety of faction combos and myriad emerging strategies after frequent plays will keep the surprises coming, but a small part of me wonders if I'll eventually find all of the decor peeling away, leaving me staring at a bare, yet well-built, skeleton. 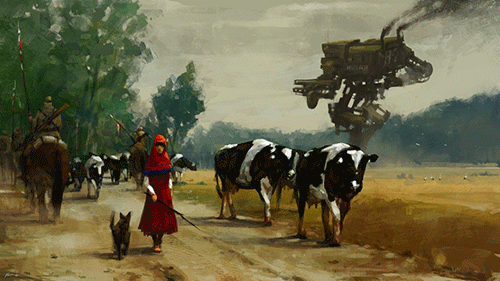 Pete: Like I said, it's a well-designed game in almost every way, but it also has the tendency toward being a multiplayer solitaire game, where you're left to your own devices for most of the game and your opponents are doing the same. Granted, the Sergeants mechanic that allows you to benefit from others' actions could be viewed as player interaction, in a very abstract way. This makes for a rather dry experience, or at least it has been with the two very diverse groups that I've played with.

Charlie: I think the diverging opinions here really highlight an aspect of Scythe that's quite unique - the game allows you to play how you want. With my two main groups we've had a great deal of combat. The fewest I've seen in a play were four. We gun for the middle and lap up those conflict stars with glee.

At the same time, the board doesn't require this. You can spread to just a couple of spaces, farm the hell out of the European countryside, and then spread out near end-game to maximize areas controlled.

It's very group dependent which is unusual for this type of design.

Craig: Very true, and the bloodless combat is a big reason why the rules work so well regardless of a group's playstyle. Once abilities are unlocked, they never revert. Once a piece hits the board it never goes back. Game balance is easier if the game state only moves in one general direction each time. My Armory giving me a bonus all the time is easy to keep track of, but me parking a mech on my opponentâ€™s Armory and not taking that bonus away from them feels a bit odd.

Raf: That mechanical march forward does bring about one of my issues with Scythe. You can't take anything off the board which means it's difficult to pull someone back. If you can't get your economic engine chugging along it can feel like you're Wall-E on a field of Autobots. You can try to pressure your opponents but for that you need mechs to help move around which needs those resources. If you get there late, then you're paying for it with popularity. This is why I dislike the fixed starting positions based on your Faction. Starting in a base whose territories don't seem to match what your mat wants to do efficiently feels like starting from behind.

Craig: The game giveth but never really taketh away. This is the heart of why Scythe works so well and it is also why it can frustrate some people. Can I say "Scythe cuts both ways" without being banned from the round table?

Pete: I agree, for me, it absolutely cuts both ways. It's wallet-shreddingly expensive and it also cuts out the parts I like best about 4x games.

Michael: I would argue, conversely, that the game takes the best parts of 4x games and cuts (here we go again) everything away that is not in service of its core themes, economic concepts and world building. This conversation has focused largely on the combat aspect of the game, which is in my editorial opinion odd because you guys are complaining about the chicken at a steak place, so to speak. Of course combat is a part of the game, but it is more about farming and technology development. But it manages those elements in the same way, separating the wheat from the chaff (one-upping Craig). I think this is a beautifully made, beautifully designed game that ranks among the better recent Eurogame-oriented designs, but you guys have made it clear that those looking for a bloodier, more apocalyptic experience might be disappointed.