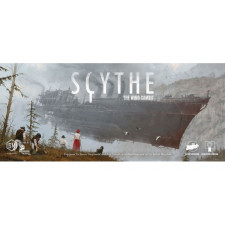 Scythe was one of my top games of 2016- I really liked the mix of hardcore economic gameplay with solid world-building, narrative and its compelling theme of Eastern European agricultural lifestyles shifting in response to martial concerns. And, of course, the game just looked spectacular with Jakub Rozalski's illustrations. Jamey Stegmaier does some generally compelling work, and it is easy for me to point to Scythe as his magnum opus. The Wind Gambit follows last year's Invaders from Afar, which was really more of a player-adding supplement, with two modules that add a little more to your scything experience.

The big add is, of course, the seven giant-sized plastic airships. There is one for each nation in the game and the sculpt is really cool. That's right. "The sculpt", not "the sculpts". The biggest disappointment in the box hits you right away when you see that unlike the mechs, there is only one uniform airship for everyone in the game. This is such a tremendously huge missed opportunity in a game so otherwise visually sumptuous, but I've resigned myself to mostly shrug it off as I'm sure casting seven unique ships would have been cost prohibitive both for Stonemaier Games and for the consumer. So we're just going to be OK with it, alright? 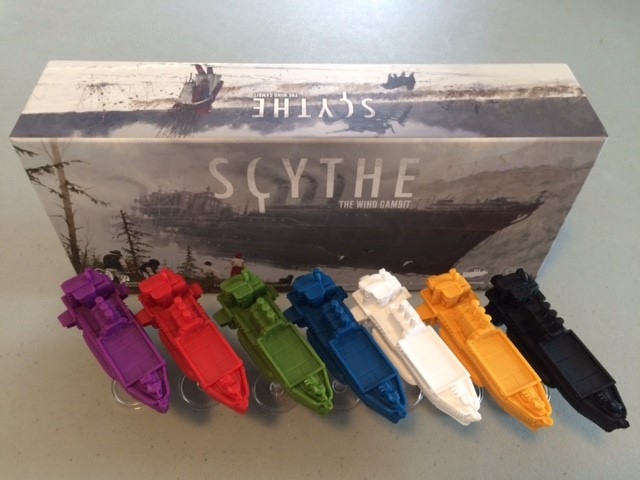 All of these things are just like the others.

Now, what they do is pretty cool and they can really serve to increase mobility early in the game because you start with them and unlike your ground-based pieces, they aren't constrained by terrain. At the beginning of the game, you draw two different tiles to determine what their actual qualities are. One is an aggressive function; the other is a passive one. As you might expect, the aggressive tiles generally affect combat and the passive ones affect transport and movement. There are some really neat ones too. I especially like Hero, which lets you trade an objective card to get another one and popularity as your big ship approaches a village and impresses the populace. There is also Distract, which keeps you from losing popularity in a territory with your airship. Or you can use Craft, which lets you build as if it were a worker.

I'm impressed at how versatile the airships can be, and I quite like how you have the option of all players' ships having the same function or dealing out a different set of tiles to each player. I also like the added transport capabilities and the relative freedom of movement- players who found Scythe to be too restrictive in those regards may find that the airships help alleviate those concerns.

The other included module is Resolutions. This is a set of 8 tiles that greatly impact the end of the game and scoring. Instead of the old six-star stopping point, these make for a variable way to wrap it up and score. The simplest one is a Doomsday clock of 20 turns. Land Rush limits transport abilities, but triggers an end when someone controls 10 territories. Spoils of War gives a player $5 when they are the first to put a star on a Triumph track categories and ends it all when someone has $40. These and the others on offer change up the long-term strategy and various incentives along the way. I would definitely class the Resolutions modules as something to be explored by experienced players that have a complete understanding of how the game operates- adding these to a game with new players is just going to confuse them while learning an already quite complex game. 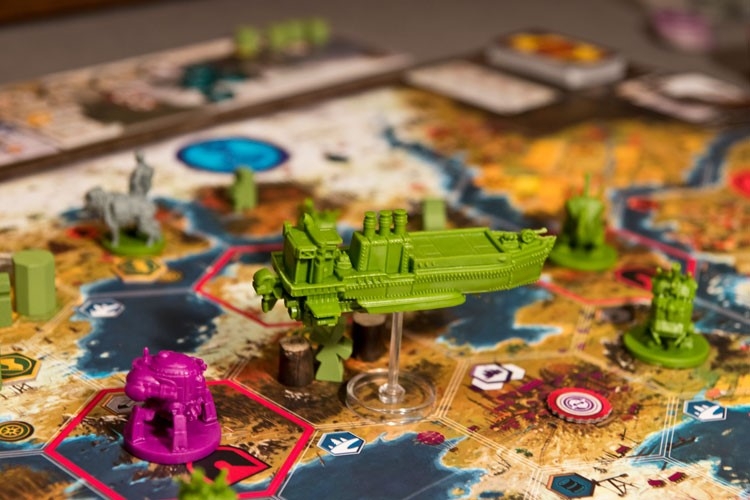 Rounding out the package, you also get a new set of Automa rules, which I am especially thankful for because I really enjoy the solo game. There are also a new set of achievements if that is something you enjoy about the game. And to ice the cake, it's a fairly low-cost expansion that adds a decent amount of variety and may just refresh the game with your group. In all, a very nicely done expansion for advanced players.