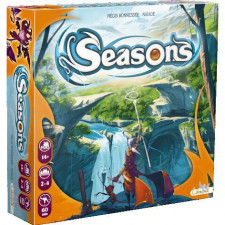 Seasons is a card game of timing and patience for 2-4 players. Thatâ€™s about as specific as I can get. Although it has elements of card drafting and Magic-style summoning, Seasons doesnâ€™t really feel like it belongs to any specific genre. Seasons is as Seasons does. Itâ€™s a game where you can combo five cards together into a single epic turn, netting a mountain of crystals and stealing the win, but youâ€™re just as likely to spend five rounds doing nothing at all. For every thing, there is a season.

Intentional or not, the reference to Ecclesiastes 3 is apt on many levels, as Seasonsâ€™ most distinguishing feature is figuring out the best time for, well, everything. It begins with a card draft. The players, representing the powerful sorcerers of Xidit (the game shares a universe with Lords of Xidit and, remotely, Dixit) competing in the prestigious Tournament of the 12 Seasons, each draw nine Power Cards depicting the magical items and familiars a mage needs to do his thing. Each player then chooses one of those cards and passes the remaining 8 to his left. This continues, with each player choosing from among the cards just passed to him, until all of the cards have been claimed.

The sorcerers will spend the rest of the game gathering mystical energy in four elemental typesâ€”water, fire, air, and earthâ€”and spending that energy to summon their chosen Power Cards into play, triggering a wide variety of sorcerous effects. At the end of the tournament, the sorcerer with the greatest prestige, calculated by adding that playerâ€™s accumulated crystals to the prestige value of all his summoned Power Cards, is crowned the new Archmage of the kingdom.

While the game can play out in 30-90 minutes, it actually takes place over three in-game years (hence the â€œ12 Seasonsâ€), and before the contest can begin, you must decide where to focus your studies for each year. Among the 9 cards youâ€™ve drafted, only three will form your hand at the start of the game. Youâ€™ll draw the next three at the end of the first year and the final 3 at the end of the second year, 1/3 and 2/3 through the game, respectively. This is one of the most important decisions youâ€™ll make in the game: you must use your wizardly instinct to determine which tools are better suited to a fledgling magician and which should be reserved for an archmage at the height of his power. Thereâ€™s a time to summon Titus Deepgaze and a time to end his life with the Necrotic Kris.

Once youâ€™ve sorted out your three-year plan, you still need to put it into action. Each round, you will roll a few very chunky dice (think more than one inch on an edge). These dice change as the seasons turn, with a set specific to winter, summer, fall and spring, and their faces provide a wide range of effects. Most give you elemental energy tokens. As you might imagine, some elements are more readily available at certain times of year. The circular seasons board starts in the winter, when water and wind energies prevail, then proceeds through spring (earth and water), summer (fire and earth), and finally fall (fire and wind), heralding the end of the year.

The most common die face features a pair of elements, providing those to the player in the form of energy tokens, while some mix or replace these energies with crystals (which, remember, are straight-up points). Others might let you draw an extra Power Card, which is always a good thing unless you are still holding it in hand at the end of the game, in which case each unsummoned card loses you six prestige. Finally, some faces show a star, which increases your summoning gauge, the amount of Power Cards you can have in play at once. Since most Power Cards remain in play indefinitely, even when theyâ€™ve outlived their usefulness, a long summoning gauge is the key to a long and prosperous wizarding career.

After the dice are cast, players take turns choosing one from which to draw power. Then, in the same order, they gain the die faceâ€™s benefits and summon or activate Power Cards (if they can and/or want).

To summon a card, you must have room in your gauge, and you must have the right magical ingredients (usually energy tokens and rarely crystals). Most familiars and artifacts grant an immediate, onetime benefit when summoned, then hang around inert until theyâ€™re called upon for endgame scoring. For instance, the Air Elemental turns all of your opponentsâ€™ energy tokens into fire element, which can really screw with somebodyâ€™s plans if played at the right time. Others have an ongoing, passive benefit like the Hourglass of Time, which gives you an energy of your choice each time the Seasons change. Finally, a rare few cards can be activated manually, up to once per round, like the Die of Malice, which allows you to reroll your chosen die before using it (and gain 2 crystals for doing so).

But just because you can summon a card doesnâ€™t mean you should. This is the hardest lesson for an apprentice mage to learn. As long as you meet the requirements above, thereâ€™s no limit to the number of cards you can summon in a single turn, and the Power Cards hide powerful combos if you can time them just right. For instance, you may want to wait until you have a die face with a curly bracket, which indicates that you can transmute energy for crystals (with a payoff proportionate to the energyâ€™s seasons rarity), before you play the Pendant of Ragnor, which gives you one energy of your choice for each other magical item you have in play. On the other hand, you are strictly limited to 7 energy tokens at a time, so you canâ€™t hold on to your cards forever.

I can understand Seasonsâ€™ popularity: itâ€™s a visually fabulous game with a fun theme and mechanics that reward familiarity while still being acceptable to a novice player. Unfortunately, the (comparatively) limited number of unique cards (50, with three copies of each) makes this game less interesting for me than other, more varied card games. Itâ€™s a unique and well-produced title, and Iâ€™ll still take it out from time to timeâ€¦but thereâ€™s a time to play Seasons and a time to play something else, and itâ€™s usually the latter.