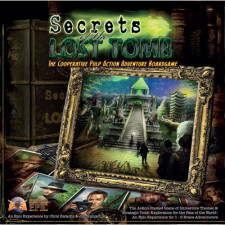 Critical Misses: Sloppy editing; swingy gameplay; some scenarios are more fun than others

Bloat is bad. Elegance is ideal. Thatâ€™s the Euro gaming party line, except when it comes to the mass of wooden cows you can pack into the box. Publisher Everything Epic Games seems destined, by its very name, to resist this narrative. A secret of the Lost Tomb, their debut game, is a rambling, inebriated, and intermittently persuasive argument in favor of excess.

Thereâ€™s a reason â€œAmeritrashâ€ mechanics are so often paired with pulp themes: theyâ€™re both characterized by excess. The sort of person who enjoys Lovecraftâ€™s verbiage is likely to appreciate the cyclopean, multifarious stacks of cards in an Eldritch or Arkham Horror. But Secrets of the Lost Tomb plumbs new depths of extravagance, and itâ€™s got the premise to match: Every 113 years, a three-tailed comet appears over the Earth, heralding the brief appearance of a mysterious tomb. Itâ€™s an Indy-style tomb crawl with mystical artifacts, ancient traps, Luger pistols, and bullwhips...plus cursed mummies, ghostly pirates, gods of Olympus, were-beasts, Mayan sorcerers, body snatchers, Excalibur, and Cthulhu. Andâ€”this is the important partâ€”theyâ€™re all rattling around the tomb at the same time. 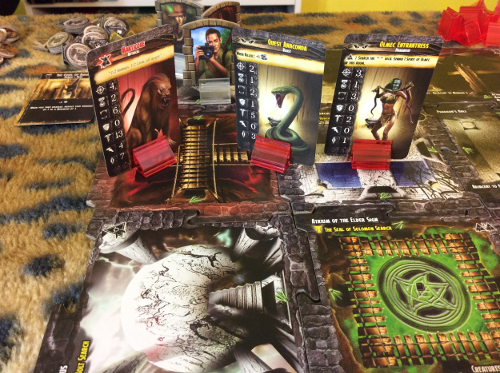 The tomb is a crucible of every pulp setting imaginable.

Mechanically, Lost Tomb is like Betrayal at House on the Hill without the traitor (unless one of you contracts lycanthropy) or the aimlessness of the pre-reveal exploration. Or itâ€™s like Shadows of Brimstone, sans campaign, in a slightly adjacent pulp milieu. Youâ€™ll spend most of the time exploring a three-story tomb made up of interlocking square room tiles. Depending on their iconography, these rooms can feature traps, force players to resolve story cards (which come in two flavors, the mostly good adventures and the mostly bad misadventures), trigger scenario-specific effects, or allow explorers to perform a special search for legendary artifacts. At the end of each round, monsters might spawn, and players will advance the comet track, which usually acts as a countdown timer for the scenario, determining when the big boss will spawn to cause the adventurers colossal grief. There are sizeable stacks of monsters, adventures, items, artifacts, and status effectsâ€”all the goodies youâ€™d expect in a pulp adventure game.

And thatâ€™s what Lost Tomb is: expected. If you like these sorts of pulp adventure games, youâ€™ll like this one; if not, you wonâ€™t. Itâ€™s no less fun than Arkham Horror, which is my litmus test for games like this, and it can be quite a bit quicker. Butâ€”much like the parade of games Lost Tomb could cite as inspirationâ€”it relies on narrative, not gameplay, to differentiate itself.

And, if Iâ€™m being honest, the Frankenstein-esque tapestry of its settingâ€”one that pits you against a blue-eyed mummy in one scenario, has you solving National Treasure-esque riddles and ciphers to unlock the Masonic secrets of the Founding Fathers the next, and time-warps you to feudal Japan to duel a power-hungry samurai after thatâ€”is the only thing that kept me coming back to the game. And that doesnâ€™t even account for the weird conjunctions that can happen during a scenario, like finding Aladdinâ€™s Cave of Wonders adjacent to the Grand High Masonic Lodge and El Dorado, all guarded by scarabs, living Olmec statues, and deep ones. Itâ€™s all so lovably bonkers, itâ€™s hard not to smile even as you butt up against swingy difficulty, ambiguous rules, and Too Many Typos.

As someone who cares about language, Iâ€™m frequently dismayed by the lack of proofreading or polish that goes into the writing of games. Itâ€™s especially prevalent, ironically, in games that purport to tell a story. With the words â€œsecond editionâ€ below the title, youâ€™d expect some polish here. Unfortunately, this editionâ€™s as rough-hewn as the tombâ€™s stonework. A few manufacturing errors seem to have been corrected; at least the rulebook has the correct cover now. However, as many issues remain. The story text, flavorful though it is, is teeming with duplicated lines, misplaced punctuation, and misspellings. No attempt has seemingly been made to correct card titles like â€œRevlover,â€ â€œLugar,â€ and â€œRouges Gauntlets.â€ The plastic parts and cardboard parts donâ€™t fit together properly, which is obnoxious given how often the courage pegs are adjusted, and I had to put the comet dial together with a steel-headed hammer. Thatâ€™s not hyperbole. For these issues to appear in a first edition was regrettable; for them to recur in a second edition is shameful. 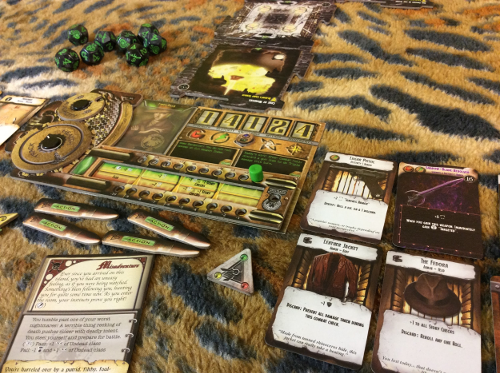 If the â€œA.R.M.â€ overlays were more functional, theyâ€™d be a great idea.

For the pulp adventure connoisseur, there are a few reasons you might pick Lost Tomb over Fortune and Glory or an Arkham Files game. Combat is speedy, using a single roll to calculate damage to both parties, trigger monstersâ€™ special abilities, and more. (Calculating every bonus and malus that goes into your dice pool isnâ€™t always speedy, but thatâ€™s a separate issue.) There are a several incentives for adventurers to band together when fighting monsters, overturning the lone wolf attitude these games tend to encourage. If you like rolling lots of dice, Lost Tomb will see you quickly exceeding the twelve included in the box. (Weirdly, these are custom twelve-sided dice, but functionally they are identical to standard six-siders.) And the scenario triggers printed on the tomb tiles do a good job of integrating scenario-specific effects into the general gameplay without making it feel like a wild goose chase for a specific tile or item card, something Betrayal was occasionally guilty of.

If any attempt had been made to clean up the rules contradictions, ambiguities, exploits, and typos in this edition, Lost Tomb might be looking at a significantly higher rating. Unfortunately, Everything Epic made only the bare minimum patches before bringing the game to retail, and while the first few scenarios are a blast to play, others feel underdeveloped. Pulp adventure fans will get a kick out of its campy excess; others should enter at your own risk.