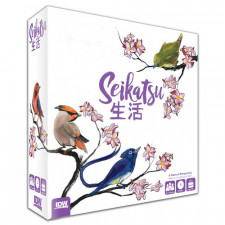 Critical Hits: Pleasant, elegant abstract gameplay that is intriguing but easy to grasp.

Most of the games I enjoy are pretty loud. Negotiating, cajoling, and yelling all feature heavily at my game table. That noise is born of tension and stress and it explodes from the players as dice clatter and miniatures are pushed across a map. Seikatsu features none of that. Itâ€™s a quiet tile-laying abstract about a Japanese garden full of birds and yet the tension is no less sharp.

In Seikatsu players take turns laying acrylic tiles onto a communal board. Together they are populating a Japanese garden with birds and flowers. Each tile features 1 of the 4 different types of birds and 1 of the 4 different types of flowers. These two groups are the key to the set-collection scoring system of the game. Birds score in flocks. By placing a bird adjacent to birds of the same species youâ€™ll score points based on the size of the flock. This is the only scoring that occurs mid game. 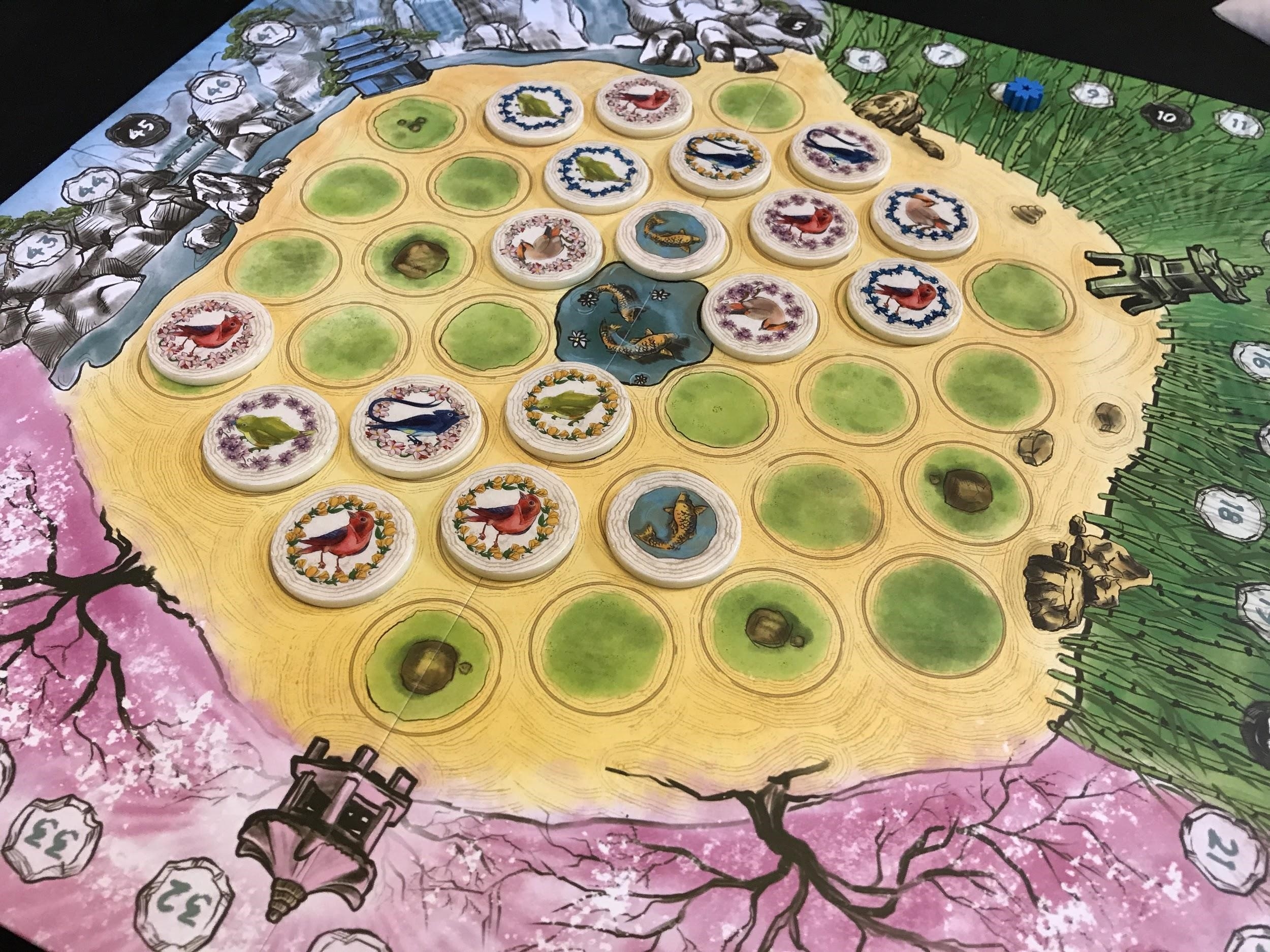 The flowers still score as sets, but the mechanism is completely different. The playing surface is large hex made up of tile spaces arranged so they make columns. At the end of the game each column will score based on which flower type exists in the highest quantity. Having 3 blue flowers in a column is worth less than having 5, and so on. However, the actual orientation of the columns is different for each player. Depending on where youâ€™re sitting your column will be made up of a different set of flowers.

This simple scoring feature gives Seikatsu dramatic tension. You arenâ€™t just deciding which space to put a tile in to increase your count, youâ€™ve got to recognize that each space is actually an intersection of 3 competing columns. Ideally youâ€™re placing some pink flowers in such a way that adds to your set while blocking your opponents from piggybacking off that placement. It adds a clever spatial wrinkle to every turn as the threat of your opponents scoring big points off something you played earlier looms over every placement.

This is the same board from 3 different sides. The arrangement of the columns is the same, but which tiles are in them is completely different. Not how the Greenâ€™s center column has 1 empty space but Blueâ€™s has none.

Your communal garden grows organically as every tile must be placed adjacent to another tile. This is great for scoring points of flocks. While the bulk of your points will come from column-based scoring at the end, it seems the margin of victory always comes down to who best managed to attend our feathered friends. As itâ€™s impossible to completely prevent an opponent from leveraging some of the same tiles you are, Seikatsu becomes a game of balance. There will be times when you draw well and can press your advantage, stacking a column in your favor. There will be other times when you withdraw defensively, blocking one â€“ or both â€“ of your opponents and hoping to pluck a couple points through a flock.

This peaceful ebb and flow is broken up in only two ways. The first is the end of the game. I usually sit back at the end of any tile laying game, content with the little world Iâ€™ve built. There is no easy contentment in Seikatsu; my world is also my opponentâ€™s world and watching them score more points with the same tiles hurts more than an army of Dwarves taking my Elf lands. The other is less satisfying. As there are a number of possible tile placements and three scoring perspectives to consider, the game does nothing to prevent a player from grinding the proceedings to a halt while they math out the immediate implications of every possible placement.

This problem is less present with 2 players and non-existent when played solo. Seikatsuâ€™s solo-mode is more than serviceable and rather tricky. Iâ€™ve yet to win the solo mode on standard difficulty, but with games lasting only 10-15 minutes itâ€™s easy to dump the tiles back into the bag and begin another round. There are some minor rules tweaks to adjust difficulty but no major changes to the set-collection aspects that make this game so good.

Seikatsu bills itself as a â€œperspective gameâ€ which, initially, didnâ€™t mean anything to me. After playing I fully understand what they mean and am excited to see designers approach a game in this way. Nothing about this game is complicated - the sets are easy to understand, the rules simple - yet the actual play is a beguiling puzzle. The pleasant art and simple systems belie a deeply tactical experience I keep coming back to play.