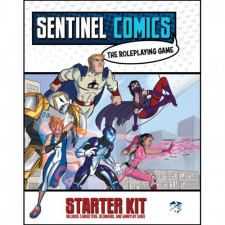 Sentinels of the Multiverse has developed a huge following of loyal fans eagerly grabbing up both game content and the lore surrounding the gameâ€™s comic book universe. While present, that in-game world often took a back seat to the focus of the game â€“ heroes in their final confrontation with a particular villain. But that promises to completely change with the Sentinels role-playing game. And the whole thing is kicked off with the Sentinels Comics Starter kit.

First, itâ€™s important to keep expectations in check. This is not a full system with guidance for character creation, tips on running your own campaign, or even detailed descriptions of available actions. Instead, it gives you six premade characters and a rulebook that gives you an overview of the basics. Is it enough to play through the six included adventures? Yes. Can you do much more with it? Not really. The Starter Kit is not intended to provide you with a whole system. Instead, itâ€™s a sampler where you can get a taste of whatâ€™s to come and see if you enjoy it. 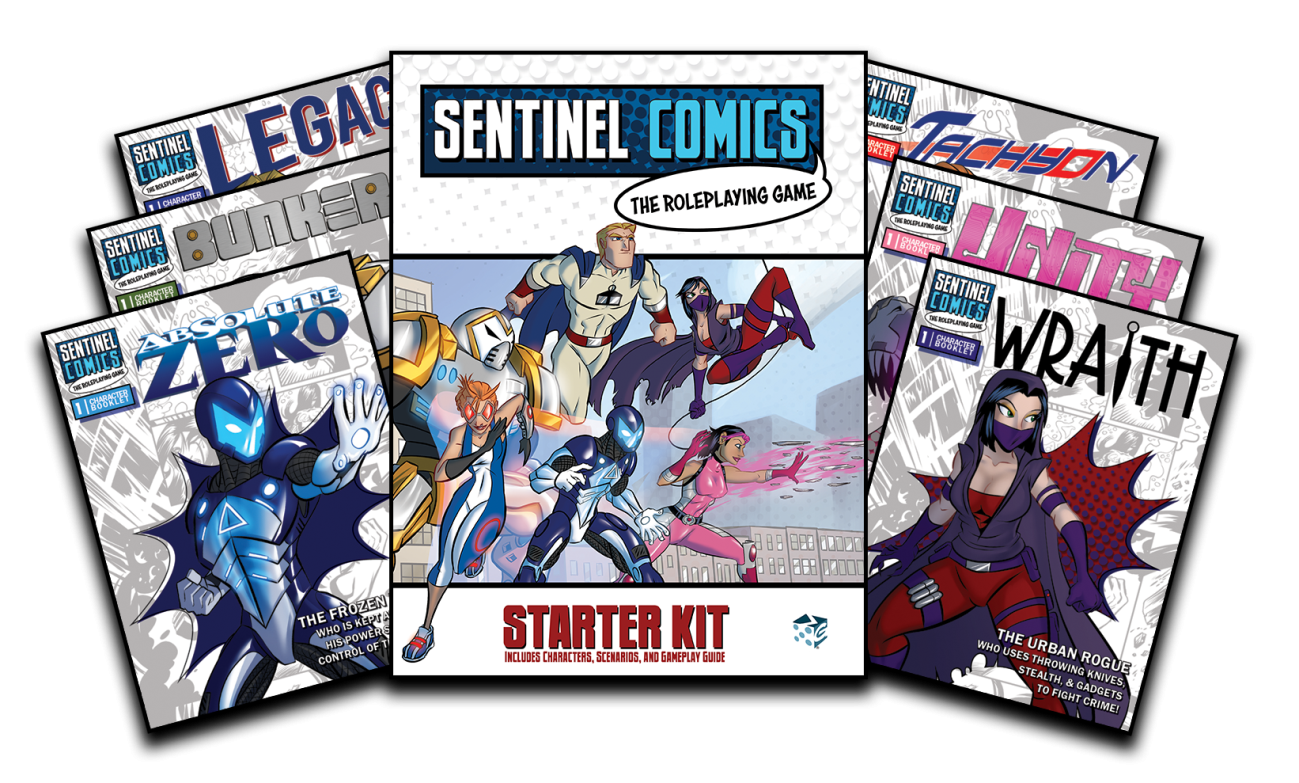 That said, Iâ€™m definitely intrigued by whatâ€™s been produced. On the lore side, you get your first bits of story of the heroes after the apocalyptic Oblivaeon event. Youâ€™ll learn not only the fate of the Freedom Five (plus Unity!), but also a smattering of other heroes as they make use of their contacts to foil the villain. For fans who have come to know and love the characters of Sentinel Comics, itâ€™s a treat to be able to interact with them for the first time.

The mechanical system is also unusual. Like many RPGs, it involves various polyhedral dice being rolled when challenges come up. But instead of rolling a single die, or rolling more dice based on how skillful the character is, you always roll three. One is determined by a core attribute, another by a relevant skill, and the third by either the tension in the scene or the characterâ€™s damage. Typically, the direr a situation gets, the better that last die becomes.

Once you have your set of three, you roll them and generally look at the middle die. The higher the number, the better. So rolling bigger dice is generally a benefit, but that higher die isnâ€™t necessarily going to produce the better result. In fact, youâ€™ll sometimes roll a 12 with one die and a 2 and 3 with the others. Well, your mid-point is a three. In my plays, rolling three dice had a different feel, but perhaps not much of a different result, than rolling one die.

Also, using the middle die seemed to make truly heroic efforts more difficult. If Iâ€™m rolling a 4, 6, and 8 sided die, then the middle die will be, at most, a 6. So my result is easily capped by the dice. But even if I had three 12 sided dice, my midpoint middle die might still be a 6 (I roll a 5, 6, and 10). Maybe someone with a better understanding of probabilities can see why the middle die mechanic makes sense. But on my plays, it seemed to consistently lower the chance of truly exciting or spectacular accomplishments which wasnâ€™t really what I was expecting from a superhero game. 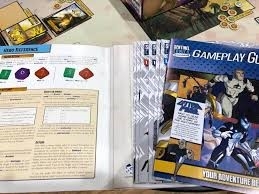 Layered on top of those are pre-generated special abilities that can be triggered for various effects. These abilities are great because not only do they give you some unique options so you arenâ€™t just doing the same punch over and over, but they also provide significant guidance into how your hero is supposed to be played. They go a long way toward making each character feel unique. Absolute Zero, for instance, actually damages himself with his early powers, but makes up for it later. While Bunker goes through various â€œmodesâ€ that provide different abilities.

Because this is a starter kit, you donâ€™t get a full rules explanation on how everything works. Itâ€™s more like your friend quickly goes over the basics to catch you up to speed so you can dive into the game. On the one hand, that makes it accessible. On the other, it does make it harder to undertake creative actions. How do you determine which attributes and skills to draw from? The Game Moderator will have to make judgment calls from time to time.

Still, even though I found myself wishing the Starter Kit provided a more solid mechanical frame, thereâ€™s no denying that I had a blast in each and every story in the Starter Kit. The Sentinels RPG has a knack for crafting compelling narratives with which players want to engage. Undoubtedly, some of that comes from the love I have for the characters from the card game. But even someone without that background will quickly identify with the classic comic book tropes.

So, while the mechanics are skeletal at best, the actual experience was a pleasure. It gives you six amazing stories to run through and enough ideas to really make it your own when the full game arrives. Iâ€™m definitely excited to see the full RPG. And, to that extent, the Starter Kit has certainly done its job.