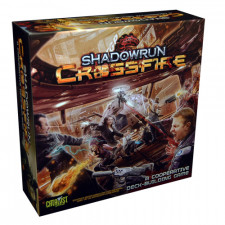 Just when I thought that every possible derivative of the deck building mechanic had been tried, Cryptozoic came out with a game that not only is mechanically similar to the only deck building game I really enjoy, it is set in my favorite fictional setting - the world of Shadowrun. On top of that, it even has some persistent RPG facets in the form of semi-permanent upgrade stickers that change your individual characters over time. I snapped it up immediately, despite my disdain for deck building, because I felt that if there was ever a deck building game that I should love, this is it. As it turns out, the gameplay itself is fairly middling, albeit relatively novel. Despite it being a co-op, the difficulty of the game is such that as often as my group tried to play it, we almost never beat the mission. In fact, Iâ€™ve never in my life played a co-operative game that was so surely stacked against your success. Itâ€™s simply harder than the Hope Diamond, and potentially just as cursed.

The setting of the game is a dystopian not-too-distant-future and you are an independent operative hired by huge multi-national corporations that are run by dragons. Magic and myth have resurfaced alongside futuristic technology, thus youâ€™ve got an elven shaman casting spells right beside cybernetically enhanced orkish street samurai wielding katanas and submachine guns. Each session is a mission performed by your crew of neâ€™er-do-wells, seeking fame and the coin of the realm, Nuyen. Each player starts with decks unique to their class and starting money and health are determined by the characterâ€™s race. As the game progresses, you gain experience points, called Karma, which are used to buy permanent buffs to your character. These are recorded in the form of stickers which you affix to your character board.

Gameplay is essentially about playing cards with icons matching those on enemy cards facing each player to advance markers and eventually defeat them. Most enemies have several icons in sequence, so you have to kill off on icon before moving to the next. You can also, in some cases, play your cards out of turn to help an allyâ€™s character.

There is very little in the way of novel gameplay here, despite being smart and quite slick, inasmuch as it is a very fast-paced game that does have some cerebral aspects and a very strong dose of â€œmetaâ€. That said, not much elevates the game to the level of special or particularly interesting other than the fact that it has RPG elements but even those are rather muted. The setting is well-executed, but the gameplay is very repetitive, not to mention brutally difficult compared to other, similar games, so itâ€™s definitely a mixed bag in my book. A lot of the difficulty comes in the form of card distributions, so your mileage may vary with your luck, but from the great many times weâ€™ve played this, it all comes down to being able to buy good cards early and get good combinations in your hand.

Almost unthinkably, there are little mission-specific, bolt-on sub-missions which you can try for during each of the mission types, and these boost the Karma rewards substantially. If the game was hard before, these little contributions to your crewâ€™s personal Hell make the game even harder. For instance, thereâ€™s an event card deck which triggers when enough cards have been discarded, and one of the add-ons makes this happen more often. These are usually devastating events that make your crewâ€™s life even more miserable, so until youâ€™ve bumped up your skills a bit you might want to hold off on attempting them because they are literally suicide. The cool thing about these, though, is that they allow the game to scale to your experience level, which is a really neat little accomplishment.

What sets this game apart from others in the genre isnâ€™t simply the fact that it has permanent stickers which change the game from that point on; thatâ€™s been done. What sets it apart is that it rewards failure in such a way that it bears a striking resemblance to the oft-hated mechanic in video games known as, â€œgrinding.â€ This entails doing a task repeatedly for the sole purpose of gaining an asset, and in this case, itâ€™s playing the game, knowing youâ€™ll very likely lose, just to gain Karma with which you can upgrade your characters. This is a truly novel approach to a deck building game, or really, any tabletop game, and it is implemented perfectly. Iâ€™d argue that it is the result of the developers struggling to find balance in the game, since it contains permanent upgrades, but no matter what its genesis, it works well here to keep the player engaged and avoids the potential for frustrated players to swear off the game forever.

At the end of the day, if youâ€™re a big fan of deck building games but want something different, then this might be a game for you. One might be put off by the fact that youâ€™re putting stickers on your player mats, permanently altering them, but Iâ€™d argue that youâ€™re not so much â€œdefacingâ€ the game as much as â€œaugmentingâ€ it. Honestly, though, if I ever get to the point that Iâ€™m not buying a game solely because its resale value may be lower than Iâ€™d like, please take away my laptop and ban me from writing reviews, because it would be abundantly clear that Iâ€™m not a true fan of the hobby anymore.