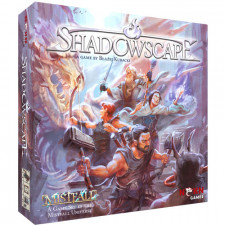 I can think of a lot of words to describe Mistfall, the debut cooperative fantasy adventure card game from Blazej Kubacki. â€œAmbitiousâ€ might describe its mechanics; â€œevocativeâ€ could cover its roleplaying and storytelling elements; â€œfrustratingâ€ would set the right expectations for its rulebook and numerous errata; and â€œworth itâ€ would wrap up my thoughts on the entire experience. The expansion, Heart of the Mists, fixed many of the originalâ€™s gaffes, and itâ€™s only the long shadow of Gloomhaven that separates it from the crown of best RPG-in-a-box. So when I saw that the designer had returned with a new, semi-cooperative dungeon crawl set in the Mistfall universe, I was all set to have my socks knocked off.

Unfortunately, Shadowscape inspires a whole different set of adjectives, ones that rhyme with â€œsnoringâ€ and â€œjointless.â€ Your garments are in no danger of becoming unsecured. While it deserves credit for a clever system of automated monster movement that only rarely results in beastmen and bone dragons chasing their tails in the dungeonâ€™s corners, Shadowscape fumbles in nearly every other category, in particular the ones that Mistfall so excelled at: character, immersion, and reward. Itâ€™s proof that even magical lightning canâ€™t strike twice. 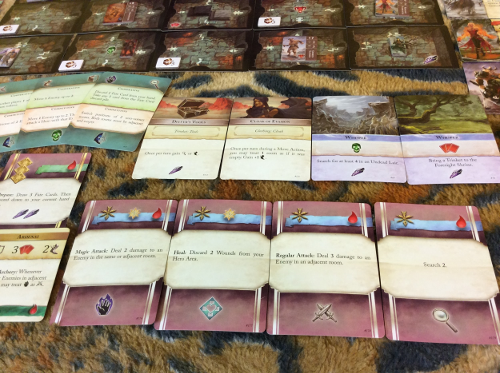 The heroes donâ€™t feel as unique as they should.

The gameâ€™s doesnâ€™t expand Mistfallâ€™s lore so much as it recycles its art assets. The premise, if you can call it that, is that the heroes have wandered into an underground Dungeon Dome and must now battle for the glory of the Nightfather. Because apparently weâ€™re doing that now. They must defeat enemies, search for treasure, and complete tasks, all the while collecting new abilities and equipment.

That descriptionâ€™s a bit misleading, though. It makes Shadowscape sound like a fun, if derivative, dungeon crawl. In reality, itâ€™s neither. In a break from dungeoneering tradition, Shadowscape has no dice; all actions are accomplished by flipping over one of your heroâ€™s four action cards, which describe actions like â€œRegular Attack,â€ â€œMagic Attack,â€ â€œSearch,â€ or â€œHealâ€ (a default â€œMoveâ€ action can be taken by flipping any card). The other side of the card usually has a less desirable action, so youâ€™ll need to flip it again to get your stronger abilities back. Any of these actions can be boosted by discarding Fate cards with a matching symbol from your hand. The final action type, â€œPrepare,â€ lets you draw additional Fate cards, but youâ€™ll also get one for free at the end of each turn, since theyâ€™re also used for activating enemies.

Speaking of enemy activation, this is the one cool part of the game. Each enemy token has between one and three movement symbols on it, corresponding to the four movement symbols that appear on rooms of the dungeon. When an enemy gets activated, it moves along the path described by each of these symbols in turn. Youâ€™d think this movement system would have the enemies walking in circles, but that happens surprisingly rarely, especially since their moves get interrupted each time they would backtrack, move off the map, or leave attack range of a hero. Reinforcing the competitive nature of the core game, the active player gets to decide which hero the enemy attacks if there are multiple targets, and you can also discard Fate cards (â€œAlter Fateâ€) to shuffle enemies and even rooms around. 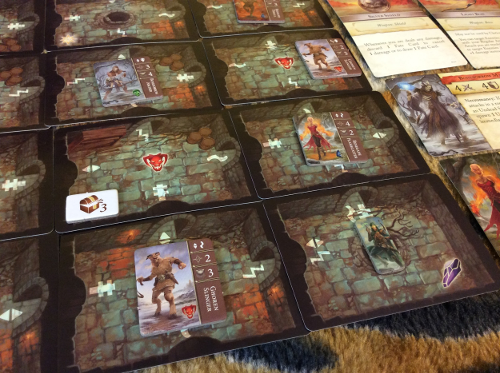 Iâ€™d love to see these enemy movement mechanics used in a decent game.

Unfortunately, that was the one cool part of the game. Thereâ€™s a lot in the game that shouldnâ€™t be, and a lot that should be isnâ€™t. The cooperative mode is barely functional and barren of fun. The hero selection is disappointing; although all thirteen heroes from Mistfall appear, with four unique action cards each, the differences are mostly limited to +/-1 strength to a few actions or an extra heal card instead of an attack. They might as well have just printed four copies of the same generic action cards and used the extra space for something else. Thereâ€™s this whole â€œshrinesâ€ thing that doesnâ€™t really add anything, too. Given how minimalistic the game is, thereâ€™s a lot of bloat to the mechanics.

Mostly, though, a handful of rules restrict the fun out of the whole experience. First, you only get one â€œClaimâ€ action a turn, which is the bonus action used to turn enemy trophies in for new actions, claim a Whisper card for completing its task, or turn treasure in for new equipment. It would be fun to actually play out the combos the game sets upâ€”search for 4 in the Undead Lair, claiming the treasure token and a Whisper; spend the treasure to get a Trinket; bring that Trinket to the Foresight Shrine to claim another Whisper. Instead, youâ€™re forced to spread that out over four turns; even with only two actions per turn, you end up stalling because of this artificial restriction. Clever play is given a slap on the wrist when it should be rewarded.

Then, youâ€™re restricted in what you can carry. The â€œPrepareâ€ action is gelded by the fact that it enforces your heroâ€™s tiny hand limit, which means youâ€™re usually discarding more cards than you drewâ€”and a lot of the searching or killing youâ€™ll need to do requires more than a full â€œhandâ€ of cards. Worse, youâ€™re only allowed to carry three trophies, including enemies and treasure, at a time. Many of the Whispers require you to bring a certain combination of enemy trophies to a certain room, so you want to hold on to them, but that means not buying new actions (which are almost always worse than the ones you already have anyway, and youâ€™re restricted to one at a time) and not being able to pick up treasure. And if you do want to, say, claim a Whisper and then spend the trophies to make room for treasure, youâ€™ve got to waste a turn since theyâ€™re both Claim actions.

Shadowscape doesnâ€™t feel like a dungeon crawl, which wouldnâ€™t be an issue, but it doesnâ€™t feel mechanically interesting, either. In the Mistfall universe, stick to the overworld.