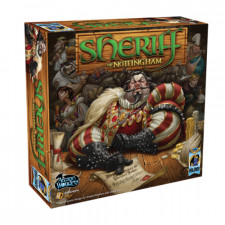 Are you the Apple King, or are you a shady cheese monger? Do you have what it takes to smuggle a barrel of mead into the city of Nottingham alongside a sack of three chickens, all under the watchful eye of a greedy sheriff? How many times can you claim to be bringing loaves of bread to market before your competitors become suspicious, and rip open your bag to find that hidden loaf of forbidden pumpernickel? All these questions, and many more, will possibly be answered when you crack open a copy of Sheriff of Nottingham.

In Sheriff of Nottingham players take turns playing the role of the titular lawman, while their opponents draw and trade cards from a central pool to form sets of apples, cheese, bread and chickens that theyâ€™ll try to bring to market â€” along with the possibility of some valuable contraband if they can sneak it past the opulent official. Apparently Nottingham is in the midst of a Prohibition Era, you see, because selling mead is quite illegal. Oh, and peddling golden apples is illegal, too! But how does a wannabe gouda runner (yes, trafficking certain cheeses is illicit as well) get his wares to buyers for big gold payouts?

During any given turn each player, except for the current Sheriff player, secretly tucks cards from their hand into a colorful felt bag and slides it over to the Sheriff, declaring whatâ€™s inside. This is really the crux of Sheriff of Nottingham and the meat of the game. While the merchant must be completely truthful about the number of cards in the bag, he can lie through his filthy medieval teeth about the actual contents â€“ and is encouraged to do so. One can declare â€œI have five apples,â€ which are the most numerous legal good in the game, when in fact there are two chickens, a crossbow, some pepper, and a keg of mead in their pouch. While a player certainly can win a game by being completely honest, this tactic is decidedly difficult to pull off due to the high values of contraband cards.

The Sheriff, after hearing each opponentâ€™s declaration, chooses whether to let the bag of goods into the city unchecked or whether he will open the bag to investigate. And thus begins the best part of this game: the bluffing, the negotiating, the bribery, and the backstabbing! A hopeful merchant can offer coin or legal goods that have already made it into his market stall in exchange for the sheriff not searching his bag. Or one merchant can pay the sheriff to search the bag of another. There are few rules dictating what is â€œallowedâ€ during this phase of the game, and at its heart this is a purely social negotiation experience. The sheriff's decision might be based on greed, deduction, or just plain old vindictive spite.

Ultimately the Sheriff will decide whether to accept a bribe or to believe another player and pass back their bag, or to open the bag and inspect the suspicious shipment for contraband or undeclared goods. A searched bag whose contents were declared truthfully can cost the Sheriff a hefty penalty, while any contraband or untruthfully declared legal goods cost the merchant that tried to sneak them in a like amount. Players prone to analysis paralysis may find acting as sheriff the most taxing part of the game here, as they struggle to count how many of a particular good has been declared versus how many are already in play. Luckily, Sheriff of Nottingham recommends a timer and has a free, themed timer app available for groups that prefer to institute a time limit on negotiations.

Legal goods- uwhether the bag is caught with contraband or not- are added to a merchantâ€™s stall. Goods confiscated by the Sheriff are sent to the discard piles. Successfully smuggled contraband is hidden face down above a playerâ€™s stall until end game scoring. While some contraband such as crossbows and pepper simply add a high number of gold to your total, others count as multiple copies of legal goods when determining who has the most of an item â€“ an important distinction later.

Each player gets to be the Sheriff exactly twice before players count up the gold value of their assets, including coin, legal goods, and contraband. The player with the most and second most of each legal good is declared the king and queen, respectively, of that particular good â€“ so if you've ever wanted to strut around a dining room table forcing everyone to call you the Cheese Queen, this is absolutely your kind of game.

There are many social deduction and bluffing games available for your game shelf, but Sheriff of Nottingham lends itself more than most to having a silly, fun time. Expect Monty Python-esque accents from everyone and plenty of blustering from the Sheriff. Shady deals will be made and, usually, at least one game of â€œI dare you to open that bag!â€ chicken will play out.

At the same time, Sheriff of Nottingham isn't as mentally or emotionally taxing as other bluffing games. There's no psychological desire to suss out the agenda of every single opponent at the table. Everyone's motives are clear and there's a certainty that yes, the person beside you wants to have the most apples and coins in his cart at the end of the day.

You'll absolutely want to add this game to your shelf if you like a fast-paced, competitive game full of wheeling, dealing, and outright lying. It's a great, very light game night opener that's easy to teach new players and deep enough for the hardcore gamer to appreciate.