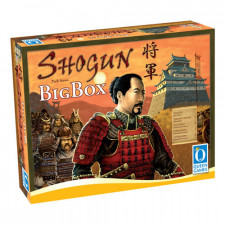 Feudal Japan is my weakness. Iâ€™ll even put up with hours of Richard Chamberlain to me get some Sengoku Jidai, so when Queen Games packaged the Japanese version of Wallenstein together with all of its expansions, I had a big bundle of samurai goodness in one box, topped with my first ever cube tower. You canâ€™t pass that up, and Iâ€™m happy to say it delivers strategic kingdom building which balances rough handling of your enemies with measured treatment of your populace and combines Euro choices with plenty of violence to deliver a satisfying experience.

Three to five daimyo vie for military supremacy of Japan over the course of two years, with each turn representing a season. Those desiring a truly epic experience can select starting provinces one at a time to build their kingdom while players choosing to get right to the action can use setups included in the rulebook. Each player helps load the cube tower with armies and a bevy of peasants are added to the mix before the conquest begins.

Shogun sports more variability than a sushi menu, forcing players to choose between a one-time bonus and turn order with their bid and commit a max of one province to each of ten possible actions. These actions are carried out in the aforementioned turn order one at a time, with the last five of them being hidden until later in the turn. So the Euro convention of each spot only being able to do one thing is there, complete with its strategy-foiling random order, but it works in Shogun, with the added bonus of keeping play time reasonable. Construct buildings, raise troops, invade neighboring provinces, and pay for these endeavors by taking rice or money from your peasants, but be careful. Shogun includes a mechanism sorely lacking in many civ games: the will of the people. 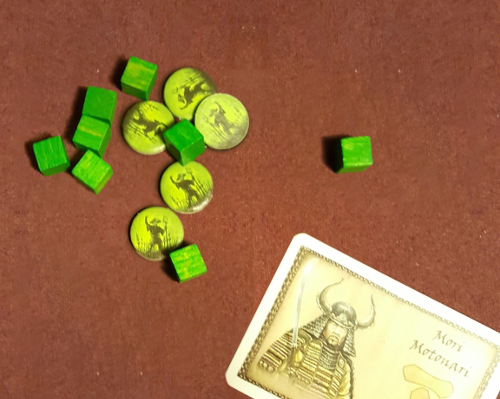 Each province giving up rice or coin gains a revolt marker. Take from them again before that markerâ€™s gone, and you get pitchforks instead of funds, so wise rulers must spread the love around their kingdom or take advantage of events that mitigate revolts. True nation builders stress the maxim about people being easier to conquer than to rule, and Shogunâ€™s peasant mechanic is one of tabletopâ€™s premier examples. Daimyo ignore it at their peril, because while a revolt typically only involves a single peasant, it also includes one of the most unique uncertainty generators in gaming: the cube tower.

The idea behind this plastic-and-cardboard device is to damp the uncertainty curve of dice, cards or chits so each playerâ€™s affected by it equally. And while grabbing up every army involved in a battle, plus all the tower trayâ€™s leftovers, and dumping the whole lot into the top of the tower to see what comes out may seem like the most random invention since the two-headed coin, it does almost perform as advertised. Combatantsâ€™ armies in the tray count toward their total, even if they werenâ€™t in the province at the battleâ€™s start, and cubes staying in the tower will fall out eventually. The cube tower requires a bit of faith, but it will deliver before gameâ€™s end. In a mathematical sense, at least, which was its designerâ€™s intent, but positives and negatives resulting in zero isnâ€™t the same thing as balance.

Iâ€™ll admit, it works. Cube towers introduce a new layer of strategy; bringing eight armies into battle against four opposing cubes isnâ€™t as appealing if two of yours and three of theirs fall out of the tower. Sure, your remaining six will come out at some point, and that may even benefit you later in the game, but right now youâ€™ve lost big-time. This is an acquired taste, but ultimately a satisfying one, because every warlord takes the same risk, and itâ€™s rare that one playerâ€™s repeatedly stung. Right thereâ€™s where it got me

It wouldnâ€™t be the Big Box edition without expansions, and Shogun includes four of them, offering varying levels of complexity and fun, allowing for many possible gameplay tweaks. Tennoâ€™s Court is the first and largest of them, introducing a plethora of bits and the most decision-making of all expansions by introducing politics. Players trade armies for diplomats and send them to curry favor in the form of additional actions and gameplay bonuses, some of which are powerful. Having your ministers in the right place at the right time can swing the contest in your favor, but trading military might for political capital that doesnâ€™t pay off can doom any would-be shogun. Tennoâ€™s Court is best for seasoned players with extra play time to spare.

The other three expansions donâ€™t add as much significance to the game combined, but can still provide the small spice some players look for instead of the extra course of Tenno. One simply gives a â€œplus oneâ€ to a particular action and a few extra victory points, while the others create extra bonuses each turn reminiscent of the semi-random â€œhey, this thingâ€™s valuable nowâ€ conditions in Terra Mystica, but if thatâ€™s your thing, add them on.

Shogun: Big Box delivers enough conflict for several Euros, coupled with real civ-building mechanics to dispel the idea that itâ€™s a wargame and plenty of expansions to keep the die-hards happy. Itâ€™s a big enough box to satisfy your samurai craving for a long time.