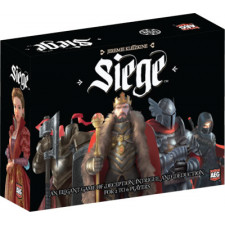 Iâ€™ve had a strong trepidation toward deduction games from the time I was young, when my brothers would hide my belongings and leave me few hints on where to find it other than, â€œItâ€™s not in Dadâ€™s roomâ€. Thus, when I received my copy of Siege from AEG, my curiosity was tempered with a bit of hesitation since Iâ€™ve played so few deduction games that I truly enjoyed. As it turns out, Siege is actually a really slick design from the standpoint that it is, essentially, a portmanteau of two my favorite games of all time, Stratego and Coup. When I say Stratego,Iâ€™m referring to the newer versions which give characters unique abilities, than the original game. Still, itâ€™s like Stratego but with six cards, no plastic soldiers, and a guessing mechanic not unlike Coup.

The reality is that this game is billed as a deduction game, but itâ€™s not akin to what I think of when I hear that particular phrase. Itâ€™s far more a sort of card battle game than a true deduction game like Clue, but it does have a deduction undercurrent as youâ€™re job is to whittle away the enemy by playing higher cards than theirs in order to find their King. Additionally, this game supports up to six players, which means that youâ€™ve got as many as five enemies to diminish in this way, as well as five sets of six enemy cards to remember. 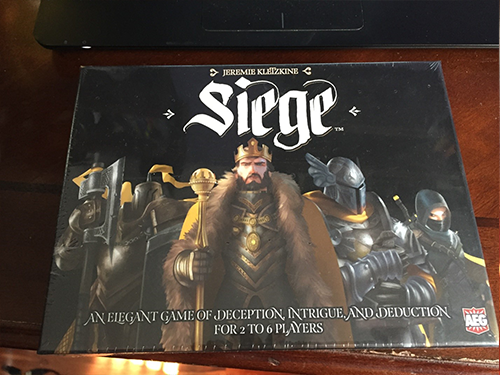 Unlike Stratego, but much like Coup, thereâ€™s a menu of options that you can perform on your turn, not the least of which is the eponymous siege power, and includes the powers of sacrifice, attack, and fall back. Siege basically locks an opponentâ€™s card down with your own, attackâ€¦.wellâ€¦.it attacks another card, sacrifice forces you to discard a card but allows you to enact the discarded cardâ€™s power, and finally, falling back pulls a card back into your â€œcastleâ€ playing area once itâ€™s done with an attack. Essentially, these can be boiled down to â€œmove, shoot, and speical powerâ€ actions, although the special powers that can be activated by sacrifice really only affect two of the six cards since one has no special power, three have persistent powers that donâ€™t require activation, and the King canâ€™t be sacrificed.

Of all of the actions, the attack action is the most interesting because of the way it plays out. Essentially, the attacker will always lose their card, but the defender loses its card only if itâ€™s beaten. Furthermore, you donâ€™t even show the opponent the value of the card you successfully defended the attack with, you simply state that you won, and the attacker dies. Thereâ€™s some serious faith going on here, but the good news is that youâ€™re not allowed to move your cards around in your playing area, so lying will invariably be discovered.

My best description of this game, sadly, is â€œintensely mediocreâ€. That may seem an oxymoron, but let me put it like this: what it does, it does incredibly well but lacks any sort of emotional stimulus or semblance of the real intrigue I was expecting based on the marketing. Sure, itâ€™s moderately fast to play, itâ€™s moderately entertaining, and the art is moderately nice, but itâ€™s simple, doesnâ€™t really play well unless you have four or more players (one might say a moderate-sized group), and it just doesnâ€™t have anything to it that would be remotely able to shine. Itâ€™s as if a high-level engineer spent hours upon hours trying to discover a way to turn a nuanced and interesting concept into a game that is as completely average as could be envisioned by the human mind. 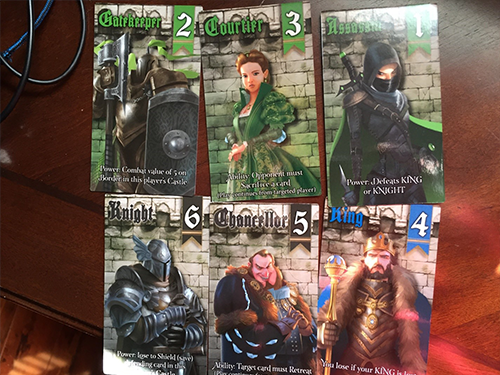 What irritates me the most about this game is that the sacrifice power is clearly only usable by two characaters, currently, which begs me to question why it wasnâ€™t cut from the game. As soon as I opened the box, that question was answered in full: thereâ€™s a slot in the largely-empty box labeled â€œSiege Expansionâ€. This is quite obviously a situation where there were more characters that were cut from the game for any of a number of reasons and held back for an expansion, which would serve primarily to fix the gameâ€™s shortcomings. That really kind of chaps my hide when companies do that, especially when it affects the game so tremendously.

Perhaps this game would be pretty good for a camping trip with a group of friends, but honestly, the small form factor could be filled just as well with dozens of other games, such as Octo Dice, or a pint of Jack Daniels, any of which would likely provide more entertainment. If youâ€™re a die-hard fan of Coup, as I am, and want something that feels like Coup but is simpler and faster, this might very well be a good fit. Beyond that subset of a subset, I would not recommend you buy this. I hate to be the bearer of bad news, but Siege didnâ€™t live up to my expectations. Which is kind of telling, because I set the bar fairly low to begin with. This may be the first time Iâ€™ve played an Alderac Entertainment Group game and walked away disappointed.