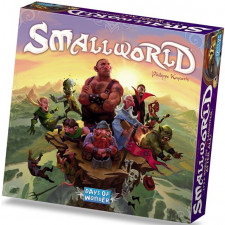 NO: In the pantheon of Days of Wonderâ€™s many successes, Small World is second only to Ticket to Ride. Itâ€™s not hard to see why itâ€™s a hit. Its implementation of conquest feels almost comically simple, but when combined with all of the different armies and special powers it ends up having a lot of variety. It has risen above its origins as a reimplementation of the old chestnut Vinci, and has become one of the better franchises in hobby gaming. Itâ€™s not a perfect game, but over the last five years it has become something of a workhorse in the hobby, reliable in its appeal and straightforward to teach. Or at least thatâ€™s how itâ€™s worked for me. Craig, what has been your experience with Small World?

CC: Small World has taken its place with Catan and Ticket to Ride adorning the gaming gateway, and I think it holds up over a gamerâ€™s career more than the others do precisely because of the variety you mentioned. By the seemingly-simple mechanism of combining two characteristics to create one faction, it showed the gaming world you donâ€™t need a thousand cards to ensure that the game has staying power or replayability.

Besides its variety, the fascinating thing to me about this deterministic yet light design is how it simultaneously fills the game with player conflict and empties it of player interaction. Unless someone defeats a stack of my armies and I need to redeploy a portion of my losses, I can go get a snack after making each move and come back when itâ€™s my turn again. Granted, players usually stick around to see if their strategy changes, but the one-sidedness of battle kept the fifth star off my rating. Whatâ€™s your take?

NO: You arenâ€™t wrong about the lack of interaction, though I kind of like that you can take your turn and then spend your time chit-chatting while the next person takes theirs. That conversational vibe is part of why itâ€™s such a hit with casual gamers. Iâ€™m the type who will probably hold a conversation during the game anyway, so itâ€™s actually custom-built for people like me. 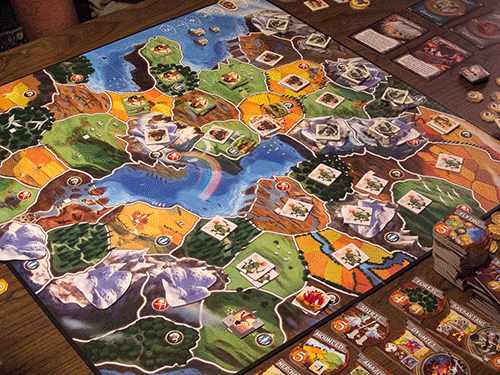 I suppose there might be room for deal-making and cajoling, but the truth is that the board situation isnâ€™t very ambiguous here. Your tokens will score points based on information everyone has and there really isnâ€™t much to haggle over. This will infuriate people who have always loved conquest games but frankly I find it to be a bit of a relief. I think there are a lot of people out there who donâ€™t mind fighting in a game, but they find the metagaming tough to parse out and overly ambiguous. I like the negotiation aspect as much as the next guy, but there is something refreshingly direct about Small World. What you see is what you get, at least as far as the board state is concerned. The real interesting part comes in the risk-reward payoff over what race to take, and when to put that race in decline. What parts of the game have held up well for you, Craig?

CC: Knowing when to send your active race in decline is the centerpiece of its staying power, and itâ€™s what keeps me coming back to Small World. As you said, conquistadors will pull their hair out when the person whose armies just got wiped from the table ends up with the most coins and the victory, but this brilliant mechanism not only sets Small World apart from the field, it allows players to create a history with each game, seeing races rise, sweep across the map and then fade into dust, with a fresh empire built on their ruins. In a sense, it creates more of a civilization than many bigger games do.

NO: Yeah, you really hit on one thing that makes Small World a popular title, and a great one. Itâ€™s more than just a conquest game. With its emphasis on civilizations rising and falling, it actually instills a little bit of civ-building in its hour of gameplay. It does this while making sure each race feels distinct and fun to play. After all these years there arenâ€™t many dud races that no one ever wants to take.

I mentioned that itâ€™s not a perfect game, and thatâ€™s true. The base game on its own is a bit thin on content, and anyone who plans on playing regularly will need to invest in a couple of the expansions to give it legs. The other thing is that it has some elements, like the closed scoring or the turn order mechanic, that are good enough from a design standpoint, but can break down the game a bit with dedicated gamers. But those design issues are more of a problem in theory than in practice, since Small World plays so well with casual players. Itâ€™s an ideal game for families and people who only own a few games, and it remains Days of Wonderâ€™s best title.