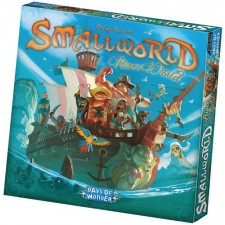 Small World long ago cemented its status as not only Days of Wonderâ€™s best game, but also one of the most impactful hobby games of the last ten years or so. Between its smooth gameplay and publicity from the likes of Wil Wheatonâ€™s Tabletop, itâ€™s now one of the more well-loved games in the hobby, joining lots of second-generation gateways like Dominion and Pandemic. Like its contemporaries, Small World has been expanded in a lot of interesting directions. The new River World expansion brings several of those expansion ideas into one box, and thereâ€™s some definite potential there. It's a misguided attempt to do something new that hampers the Small World experience.

River World combines qualities of the Legends and Realms expansions, as well as a couple of good tricks from the other Small World game, Underground. The expansion comes with new boards for all the player counts, showing a version of Small World crisscrossed with rivers. Unlike the water in the base game, rivers can be crossed using a single token, allowing player to jump across to new islands. Any tokens used this way are removed at the end of the turn, but itâ€™s a good touch for sure. There are also a series of events that trigger in every round, giving the game a very different personality depending on their order. Finally, the board also has some features not found in the base game, such as harbors that generate more points when you own more of them or a seer that allows you to peak at the next event. 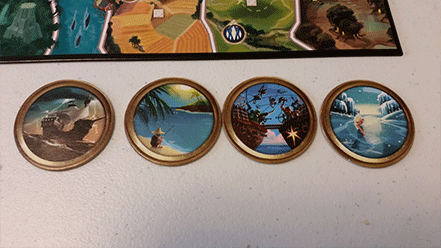 So far, so good. Nothing here is earth-shattering, but all of these things are well-executed and look great. I had hoped this would serve as a sort of expansion-only version of the Underground map, which also featured a river and location-based powers. But River World also tries to inject something new to the experience, in the form of pirates. These scurvy dogs sit in the rivers, acting like a small road-block to those who want to cross. More importantly, they reduce the point value of any adjacent territories. If one river section has a pirate, all bordering regions will most likely have no value at all. They arenâ€™t exactly difficult to deal with, but the matter is complicated by a particular event that places a new pirate in every empty river region. 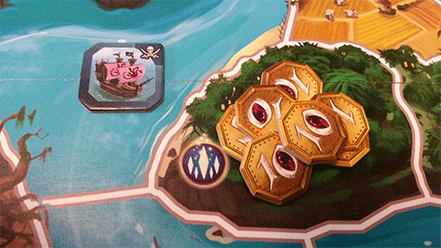 To put it bluntly, the pirates suck. Players are forced to deal with them constantly, or else their scores are trashed. The upshot is that players spend far more time dealing with the pirates than they do with each other. It removes the combat between players and makes the players fight the game instead. There are some interesting metagaming possibilities here, like deals where one person fights with pirates now for a favor to be named later. But those situations already presented themselves in the original Small World, and there it didnâ€™t involve curbing player conflict.

Furthermore, the idiosyncrasies of the original design donâ€™t mesh all that well with the pirates. In-decline tokens are especially affected, since they donâ€™t have a way to deal with pirates on their shores and are often rendered completely useless by one bad event. There are also some strong swings in how the different races and powers interact with the pirates. The orcs actually like dealing with them, since they get extra points for conquering occupied regions, which I assume include pirates in rivers. Seafaring races can just camp out on the river spaces, preventing the pirates from spawning in the first place. But those interactions mostly result in situations where a specific combo is much stronger than it was before, and others are nerfed. Itâ€™s kind of interesting, but only for the people with the good combos. 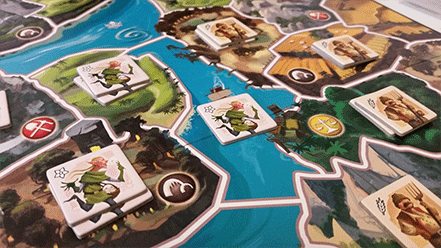 The elves and humans still wonâ€™t get along.

The one saving grace of River World is that the pirates are not so integrated into the design that the whole thing is wrecked. Itâ€™s a very easy matter to not make the pirates reduce the score of adjacent regions, or to only put the pirates in their starting regions when directed by an event. Both would be more palatable than the game as written, and any future plays will probably utilize one of those rules. But the whole thing just shows that Small World is a game best expanded with a light touch. It doesnâ€™t take much to produce new combos and rules interactions, making the game altogether more interesting. I admire River World for trying something different, but in the process it detracts from the core of player conflict that the original game nailed so well.