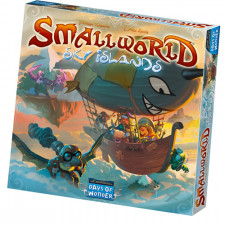 Small World was an almost instant classic upon its release. It takes the well-worn concept of different armies attacking one another but removes much of the luck and all of the player elimination. Sky Islands is the latest expansion. Focusing on the air, this new addition not only adds new races and powers to the mix but also a new board featuring the eponymous islands.

In order to play, you add the Sky Islands board and then use the base game board for one player less. So with four players, youâ€™d use the three player board plus the sky islands. The game also comes with tokens for the Stairway to Heaven and the Beanstalk. You add these to the main board and they become adjacent to particular locations on the Sky Islands board. These are the gates to travel between boards.

Other than that, the island spaces function identically to their more terrestrial counterparts. The only exception being that if a single race controls every territory on an island, they get one bonus coin.

The islands are a neat concept, but almost entirely a rehash of the Tunnels mini-expansion that had been released way back in 2011 shortly after Small World Underground. Similarly, that allowed you to combine boards and then mark particular spaces as connectors between them. While itâ€™s a little disappointing that there isnâ€™t much more new here, Sky Islands does give players a way to experience that feeling without having to acquire Underground and Tunnels. 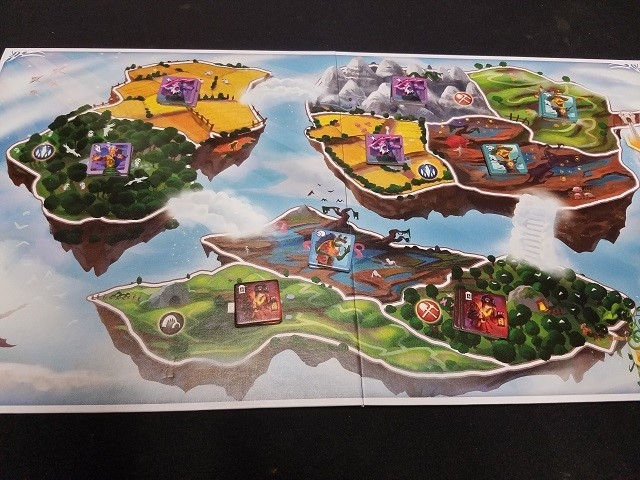 And itâ€™s an enjoyable way to play the game. The connecting territories tend to be hotly contested. Even if a player manages to control one for a turn or two, as soon as his race goes into decline, the other players descend like vultures. It has the effect of making two particular spots more generally valuable â€“ and thereby increasing the competition.

While the Sky Island board is ok, the new races and powers are all much more interesting. Two of the races, Escargots, and Scarecrows, have a ton of tokens, but serious drawbacks. The Scarecrows, for instance, give players a bonus coin from the bank when they get conquered. Youâ€™ll be a pretty big target. Meanwhile, the Scavengers get stronger when they conquer an in-decline race and the Wendigos can simply clear out opposition from forests.

The abilities, though, are some of the most fun in all of Small World. Sure, you have more straightforward ones like Exploring which gives you bonus coins for being in the sky and the ground, or Goldsmith which makes mines more valuable. But there is also Racketeering which gives you coins when other players select new races. Or Zeppelined.

The Zeppelined player can make up to five special conquests using the die. But if the die comes up blank, the zeppelin crashes and kills everyone there (essentially a successful conquest). Although you donâ€™t get the region right away, it is unconquerable until your next turn. So youâ€™ll get it next time.

Sky Islands is an interesting expansion because it caters well to both new fans and long-time Small World aficionados. If all you have is the base game, this title adds new races and powers, can expand your player count to six, and provides you with a whole new way to play. And if youâ€™ve got everything that came before, you now have some of the more interesting races and powers that will really change your strategies and how to interact with opponents.