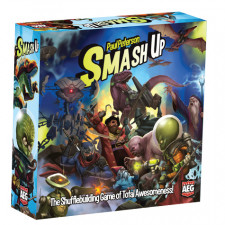 According to Mel Brooks, Friedrich Nietzsche once said, â€œOut of chaos, comes order.â€ Well, a good philosopher is a bit daft in the first place. I mean the world and everything in it is breaking down, not getting better. In the second, Herr Freddie never played Smash Up. One game of Ninja Robots verses Zombie Dinosaurs quickly puts that crackpot axiom to bed.

Smash Up is a one-of-a-kind design. It starts with a few familiar elements common to many card games. Then it mixes them with an innovatively simple concept to create a unique experience. Thatâ€™s refreshing in this day and age when thousands of retread titles are released annually like undergraduates passing intro to philosophy.

The core set includes eight disparate factions, all tongue-in-cheek homages to genres any geek should be familiar with. There are Aliens, Zombies, Ninjas, Pirates, Tricksters, Robots, Dinosaurs, and Wizards. Each one has a 20-card deck of minions and actions. You choose two of these and shuffle them together. The resulting combinations generally elicit laughs as your coven of Dinosaur Wizards takes on a horde of Ninja Zombies. Sure itâ€™s difficult to imagine just what in the world a Dinosaur Wizard is â€“ but when you see your deck, youâ€™ll probably exclaim, â€œThatâ€™s it!â€

Your odd coupleâ€™s goal is to capture bases. These have various â€œbreaking pointsâ€ and are captured when a collection of minions have invested it with a cumulative strength that equals or exceeds its scoring threshold. Most locations award points to the players with the first, second, and third highest strength â€“ but not always. And first place doesnâ€™t necessarily receive the most points. Ultimate victory is achieved with 15 total points.

The game is deceptively straightforward. On your turn, you may play one minion and one action and then draw two cards. However, that summarization is about as helpful to you as if I started critiquing Schopenhauerâ€™s influence on Nietzscheâ€™s early conceptualization of categorizing individualism and chaos. You see, Smash Up ironically turns one of the German thinkerâ€™s notorious theories unapologetically upon its head. Out of this designâ€™s simple order comes massive bedlam.

The culprits of chaos are the cards. Minions, actions and even bases can introduce a new rule, power, bonus, ability or other effect that influences cards already played or ones to enter on a future turn. Some allow you to play multiple minions and/or actions. Others let you move cards, kill off cards, prevent others from playing cards, change the way bases are scored and modify one or more minionsâ€™ strength. The more players there are, the more cards there are and the more disorder there is. Keeping track of the ever-changing scenarios can be more difficult than passing an exam on 20th Century German Existentialism.

Brilliantly, the factions function somewhat thematically. At least as much as one can expect for a simple card game. Ninjas assassinate minions and actions â€“ and can spring surprises during base scoring with unforeseen infiltrators. Zombies retrieve minions from the discard pileâ€™s dead to quickly infest bases. Robots overwhelm you with weak minions that power each other up when in greater numbers. Dinosaurs are just big, powerful beasts â€“ dumb as a fossil, but bringing the prehistoric lumber.

While thematically spot on, individually the cliques are not balanced. At all. Theyâ€™re not supposed to be and youâ€™ll be glad of it. These arenâ€™t designed to be played individually, but with a couple mixed together. The reward is figuring out what works, what doesnâ€™t and which alliances are fun to play regardless of their deficiencies. One set might beautifully synergize with and compliment another, while dragging a different one down like an anchor to a concrete boat. All of this makes the combinations strategically interesting to experiment with and a blast to role-play.

Not too surprisingly, the design has proven a smash hit â€“ which means that AEG publishes a couple expansions a year in their efforts to leave no gamerâ€™s wallet unopened. Unfortunately, some debatably stretched add-ons risk tarnishing the titleâ€™s distinctive singularity and eventually the series will â€œjump the shark.â€ Ah, snap! I probably just gave them an idea for a new factionâ€¦

Actually, AEG already jumped the shark with their Big Geeky Box expansion. Sure, the storage case might prove useful, but it also includes the â€œGeekâ€ faction â€“ minions and actions based on the trendy nerd site Geek & Sundry. Really. Crazier yet, theyâ€™re letting fans nominate and vote on the next factions, which should give Peterson some fun challenge. That said, I would recommend at least one extra set if for no other reason than to get a sheet of victory point tokens, which is the base gameâ€™s one glaring omission. Since there are several released now, you can thankfully be choosy. For example, I detest anything Cthulhu, so I can avoid that set. At the same time, Steampunk draws me like a moth to flame, so I was all over Awesome Level 9000. If youâ€™re a completionist or a sadist or filthy rich, then collect until your heartâ€™s content. Although I take back that part about being filthy rich. These are actually very reasonably priced. That will make assembling the eventual dream team of Disco Hunter-Gatherers all the more irresistible.

If you yearn for Nietzscheâ€™s order, Iâ€™m sure you can find some spreadsheet of a game where you calmly earn points for everything, like explaining the rules clearly and selecting player colors without argument. However, order is hard to find in the real world. For that reason you might be looking for a dash of insanity. Smash Up crams it down your face. Thatâ€™s okay. Itâ€™s full of action, tension, bluffing, fighting and dizzyingly evolutionary play. It can be hilarious, frustrating and mind-blowing. Itâ€™s a smart and silly design that rewards careful thought and bold gambles. Most of all, it proves that chaos isnâ€™t such a bad thing after all.