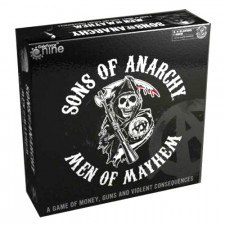 Sons of Anarchy: Men of Mayhem, from Gale Force Nine, came across my desk a week ago and I've since had the opportunity to play it with three and four players. Being a big fan of worker placement games, I was hoping that this would be a genre-bending title that mixed the European-style worker placement genre with a gritty, dark theme and tied together with a bunch of direct player interaction. As it turns out, it does exactly what I had hoped it would but sadly it is only truly engaging if you have the right kind of players around you. This is absolutely the kind of game that is made or broken by the group you play with, because the majority of the fun has everything to do with the negotiation, backstabbing, and table talk. The mechanics are solid, yet only mildly interesting, and the game relies too heavily on the novelty of playing a game that involves players taking part in dope dealing and murder, gang initiations and visiting porn shops.

The idea of the game is that you are the leader of one of four biker gangs, and your goal is to make as much money as you can through activation location tiles, doing deals with other players, and selling contraband. You're limited to five â€œpatched members" and five additional "prospects", which are scrubs at best. You take turns activating them with a smart orders mechanic which limits how many things you can do during your turn. In addition to this, at the beginning of each round, one to three cards are played and affect the metagame situation for the round. Some cards are helpful, offering new opportunities, and others will limit what kinds of actions players can take. Beyond these factors, this game is, at its core, a relatively simple worker placement game, with a few novel mechanics that are different from anything I've played before

But where it shines is in the direct confrontation. The best analogy I can think if is if you imagine playing Agricola or Stone Age, but instead of being locked out of actions when another player has taken them you could instead go to that location and have a battle to knock the other guy off the location. That sums up Sons of Anarchy in a nutshell. The majority of the game is very confrontational with regard to taking locations.

If you, like I, have never seen the Sons of Anarchy television program, you may view it more objectively. To me, it's just a biker gang game, with the licensing being secondary to the game itself. It has imagery from the show, or so I've read so if you're a fan of the show you'll probably see locations that you recognize. Maybe that will add to the game for you, but from my perspective, the game play and theme are well-integrated and so the license neither helps nor hinders my enjoyment.

Despite what I would've thought based on my limited knowledge of the show, this game isn't nearly as salacious as one would guess, either. For instance, there's no actual reference to drugs in the game. The bags that any reasonable person would think are duffel bags of dope and/or pornography, considering the theme, instead are referred to as sanitized "contraband". When I played this with my 13 year old, I referred to them as bootleg CDs, for example, so this isn't a game that is necessarily adults only. If you want to make it a much more "PG" experience, you can simply remove the tiles from the pool which depict a meth lab and an adult film studio.

As I alluded to earlier, I found that the best part of the game is in the scheming and plotting. The worker placement mechanics are fine, with a great deal of difference in what each location does, but if you were to play this game without uttering a word to other players, it would very likely fall flat. If you go into this game knowing that you've got to cut side-deals, and maybe break some of the alliances when it benefits you, you'll have a very good time. But, if you're not into negotiation games, I would not think that this would be a good fit for your group, unless you, like me, really like the worker placement mechanic and are sick of the normal fantasy tropes and Renaissance merchant themes that plague the genre. In the final analysis, it's a good game, not a great one, and enjoyment is very dependent on your appreciation of grimy thems and game play that skews heavily toward backstabbing.