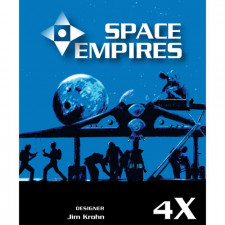 Space Empires: 4X is the ultimate anomaly: itâ€™s the definitive epic space game, a reimplementation of classic PC 4X games that still somehow manages to avoid the drawn-out, 12-hour plod to a conclusion of most of these kinds of experiences. Itâ€™s all at once simple and expansive, archaic and innovative, creeping and immediate. Itâ€™s the standard for the genre, full stop.

Jim Krohnâ€™s masterpiece manages to do more than games like Fantasy Flightâ€™s magnum opus by doing less. You wonâ€™t spend 45 minutes explaining the rules and as much time setting the game up. The rules are simple, clear, and to the point.

All of this simplification doesnâ€™t gut the strategy of these kinds of games, but rather magnifies the decisions you make. Since youâ€™re not playing pointless role selection mini-games or goofing about with convoluted mechanisms, the game becomes an intimate, personal duel among the stars. The elegant rules do what the very best board games do: they get out of the way and let you play with your friends. Plus, like most Jim Krohn games, thereâ€™s a whole host of alternate, additional, and optional rules you can throw in if you like that kind of thing, you weirdo. 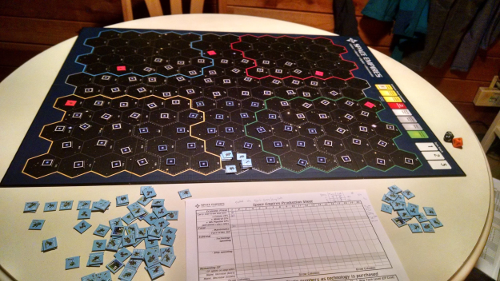 Avalon Hill called and they want their radical 1970s aesthetics back.

Managing a space empire is serious business. You have to spend time exploring your galactic neighborhood, colonizing local planets, building defenses and ships, and finally launching an all-out assault against your neighbors. The game handles all of this micro-management tidily with a clean pencil-and-paper solution. Anachronistic? Maybe. But itâ€™s a whole heck of a lot better than pushing around microscopic cardboard tokens and fumbling with cubes like most games in the genre. Write down how much you produce, write down how much you spend, build your ships. No fuss and no muss.

While most of these kinds of games lend themselves to turtling, picking on the guy who just got attacked, and lopsided political alliances, Space Empires handily avoids this by making the victory condition stupid simple: take out one opponent. Once you do that, you win. Therefore, Space Empires rewards aggression and bold maneuvers, and itâ€™s easy enough to bow out if your gambit to take victory early fails, especially in the two-player game.

The game is a question of timing. Youâ€™ll try to guess what your opponents are building, sending scouts to their doom as you gather valuable intel regarding what kind of ships you ought to be slamming out. Then itâ€™s up to you to decide when the time is ripe to attack. Of course, youâ€™ll be tempted to take your time, slowly build up your economy, and only strike when youâ€™ve amassed a fleet unparalleled in size and power. But the player who does this is likely to fall to an early invasion at one of their weak points. The player who best reads the game state and strikes at the exact right time will win the day.

Still, youâ€™ll watch in despair as your friendsâ€™ empires start pumping out dreadnaught after dreadnaught, base after base, and youâ€™re still trying to replace that scout that warped right into a black hole. You try to hold the thousand reins that guide your empire as the whole thing spins out of control in the blackness of space. Theyâ€™ll all slip through your fingers and youâ€™ll roll the dice on one desperate gambit to take your buddyâ€™s homeworld. And when your ships slowly come limping home youâ€™ll just hope you saved enough money to build one last base to make one last stand against your rivalâ€™s one last big attack.

Battles have some tactical decisions, but are mostly decided ahead of time, by whoever built the better ships. Close battles will come down to the roll of the dice. Theyâ€™re resolved quickly and efficiently, which is exactly the kind of combat resolution needed to prevent a 3-4 hour space opera from turning into a 6-8 hour bore. If I play one more sprawling 4X game that tries to get clever with some intricate card combat system Iâ€™ll go mad. Just let me roll some dice and get on with the game. Space Empires 4X does this and it does it perfectly. 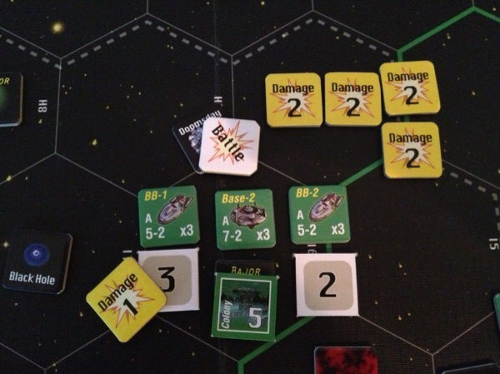 The peaceful green empire fights back against the Doomsday Machine.

The systemâ€™s also fully fleshed out with various map setups for different player counts and game lengths and two completely different solitaire modes. The solo Doomsday Machine invasions are almost as fun as the multiplayer games, as they force you to scramble to defend your empire against a wave of deadly weapons of mass destruction arriving from the void of space. Itâ€™s a mad scramble to get your colonies ready in time, and you can feel the tension ramp up as you realize you built your base on the wrong side of the galaxy and the DMâ€™s rushing your totally defenseless colonies all across the map, gobbling up millions of helpless citizens because youâ€™re a failure of a space emperor. The game also has an AI that acts like a real human opponent, managed through a handy flowchart, but at that point Iâ€™d rather wait until I manage to get someone interested enough to play me.

For the people who love tabletops covered in piles of components, fistfuls of minis, the intrigue of politics, and 12-hour game days, there are other games available. For people that want to throw a game on the table and start blowing up their friends in the silence of space, thereâ€™s Space Empires: 4X. When it comes down to it, this is the only game of galactic command and conquer Iâ€™ll ever need.